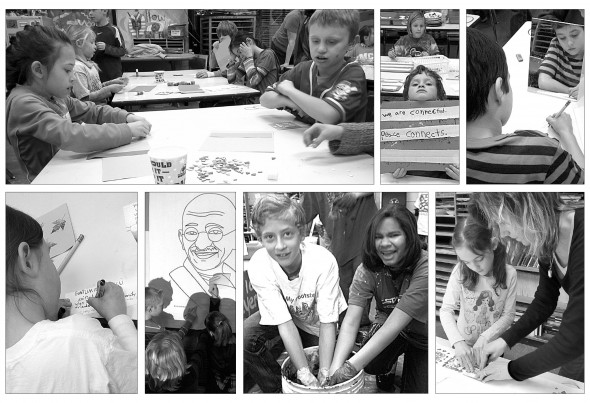 For the past eight weeks, Mills Lawn students have been involved in a whole-school project that promotes building a culture of peace. The culmination of Project Peace, a multimedia triptych featuring portraits of historic peacemakers, will be honored at a reception from 2–4 p.m. on Sunday, March 24, at Antioch University Midwest. Shown above are, from top left clockwise, second graders Karmyni Van Pelt and Joshua Clark; kindergartner Sam Trelawny-Cassity holding a peace message; Kaden Bryan drawing his self-portrait; artist-in-residence Deb Housh working with Olive Cooper; sixth-graders Teymour Fultz and Hailey Qualls immersing themselves in indigo dye; fourth graders admiring a portrait of Gandhi; and a student writing her peace message. (photos by Allison Paul)

At the beginning of the school year, Mills Lawn principal Matt Housh and school counselor John Gudgel got together to discuss their school-wide goals for the year.  Number one on Gudgel’s list was addressing the issue of bullying, which he defines as “ongoing, intentional behavior to cause physical or emotional harm.” Housh also felt that this was a priority, since data collected over the past two years showed that bullying behavior and social relationships in general were affecting the school’s climate and culture. For example, in a report from 2011, Mills Lawn saw nine different incidences of bullying from October 2010 to January 2011.

The fruits of that initial discussion will be unveiled on March 24 at Antioch University Midwest. From 2–4 p.m., villagers will be able to attend the reception for Project Peace: Confronting Bullying through Art, a multimedia triptych which features portraits of historic peacemakers and heroes. The result of an eight-week in-school collaboration between the Yellow Springs Arts Council and Mills Lawn School, it includes contributions from every grade level and at least three different artistic mediums.

According to Housh, both he and Gudgel wanted something that was “more than just an anti-bullying campaign” and Gudgel, recognizing that Mills Lawn is already known as a “school of the arts,” had the idea of somehow combining issues of bullying and harassment with artistic expression.

“I didn’t have the artistic skills,” said Gudgel. “But I was willing to reach out, search for funds” and look for support in the community.

Eventually, Gudgel’s search led him to Patti Dallas of the Village Human Relations Commission and Deb Housh, the arts and cultural manager for the Yellow Springs Arts Council, or YSAC. When Dallas helped the project secure funding from the Human Relations Commission, the Yellow Springs Arts Council provided a matching grant. These funds enabled the project to create two artist-in-residence positions, one for Deb Housh and one for Allison Paul, who Housh chose for her background in art education and interest in social justice.  In a recent email, Paul, who is also the manager of the John Bryan Community Pottery, said, “Art and social justice is an area I am passionate about, and Deb knew this would be an opportunity I wouldn’t want to miss!”

The  timing of the school’s interest in collaborating with YSAC was particularly serendipitous because the organization has begun to “reinvigorate its education component,” according to Deb Housh. Discussing YSAC’s nascent artist-in-residence program, she shared that “the vision behind it goes deeper than traditional artist in residence programs” which tend to focus on an artist teaching a specific technique or artistic process. Instead, she hopes to offer to schools “a much more integrated, conceptual approach, with co-planning and co-teaching around ideas.”
“The expertise around technique follows the ideas” she stated.

In the case of Project Peace, the conversations between the school and YSAC centered around the question of how to not only address bullying, which is a negative concept, but also how to develop a positive, productive alternative.

“We looked at ideas and values for the whole school community and then we pulled from our bag of tricks to come up with an appropriate project,” Housh said. Eventually, Paul and Housh combined their expertise to envision a three-panel, multi-media triptych devoted to peacemakers, making sure it had elements that could include every grade level in the school.

The fourth and fifth graders, who were already doing research around historical figures, were assigned the task of researching and picking three historic peacemakers. Paul then led them in what’s known as “large scale contour drawings” in which an image, in this case a portrait of the person, is projected onto a large canvas and the artist can trace the image from the projection. Following the lines, the students wrote about the peacemakers and their work, with the result being that from far away you see a portrait but a closer examination reveals information about the person’s life.

In the meantime, Housh worked with the second and third graders on Adinkra symbols. Originating in West Africa, each symbol represents a concept, piece of wisdom or positive message and is used in printmaking and woodcut art. Housh and Paul felt that these symbols, with messages such as trust, community and kindness, conveyed the attributes of a peacemaker and so the students researched the symbols and what they meant. They also wrote out what the symbols meant to them personally, which for Housh encouraged the students to “write their truth” and taught them that “it’s not just a pretty picture. Images have symbolic meaning.” Eventually, the students created their own prints of various Adinkra symbols and used them to frame the portraits created by the older children.

The sixth graders, who are the oldest students at Mills Lawn, were paired up with the school’s youngest members in kindergarten and first grade. Together, they wrote messages of peace on strips of cloth and then dyed them using tie-dye and batik-like techniques. These strips will be tied around the perimeter of the piece, demonstrating the commitment it takes to be a peacemaker. According to Housh, they also create a “lush, textured frame” and encourage interaction with the work.

Finally, the sixth graders did more in-depth work with Paul, who shared with them the rich history of indigo dyeing. They then wrote their own messages of peace and used real indigo dye for the strips of cloth. When these are also added to the frame, the viewer can see a range of interpretations of what peace means to children of different ages.

“We’ve got kindergartners’ messages of peace and then the sixth graders, who are more mature,” said Housh.

For Gudgel, who had originally been thinking along the lines of a poster contest, or more individual works of art, the result “went above and beyond what I envisioned.” With the YSAC “lending their energy and expertise” the project has blossomed and exceeded his expectations.
“It’s energized me to move further,” he said, and provided extra motivation to continue his work addressing bullying and harassment in the school.

Although he is thinking about the future, Gudgel also did a considerable amount to lay the groundwork for the artistic aspect of Project Peace. Together with Deb Housh, Paul, Carol Culbertson (who runs Interest Learning Education at Mills Lawn) and Principal Matt Housh, he created a set of overarching themes around bullying and peacemaking that would be approached in the classroom in tandem with the art project. Starting with a definition of bullying behavior, he used activities such as role-playing and scenarios to spark discussion in each classroom about bullying and the positive response of peacemaking. The approach succeeded in creating conversations and students “got into some deep-rooted discussions about bullying” according to Gudgel.

Fifth-grade teacher Dionne Barclay agreed, noting that her class particularly enjoyed the scenarios Gudgel would share on the morning newscast.

“There were scenarios for each grade level, with probing questions like ‘how do you think this person felt?’ Out of that comes personal experiences — everyone has a story” about either witnessing or participating in bullying behavior. Although some of the stories are “kind of heavy,” Barclay felt that the interdisciplinary nature of the project “made some of the students more comfortable discussing bullying…They love the art piece and it’s a great way to connect students to the project.”

Although she is not with the students full time, Paul has also noticed that, for the younger students, “their enthusiasm about the art making that we are doing lends an excitement to the concepts themselves, and this is where the energy builds in a fantastic way” and she herself has “loved seeing the small ways that students connect to the ideas around being a peacemaker.”
For Principal Housh, the integrated nature of Project Peace contributes in multiple ways to the kind of school culture he and his staff are trying to build. According to Housh, Project Peace “offers continued exploration in the world of project-based learning,” which is an educational philosophy Mills Lawn has been moving towards in recent years. In project-based learning, Housh said, “you create questions and guidelines for students to discuss and formulate their own experience” while also focusing on “thematic learning” in which “there is a bigger theme or project that everyone in the school is connected to.”

In general in project-based learning,  Housh sees “power in students all discussing the same thing” and the same has been true for Project Peace, with parents and teachers sharing that children are reflecting on the issues raised by the process.  The school-wide effort has also helped the staff create the school atmosphere they’re looking for.

“We are trying to build a culture that supports peacemaking,” Housh said, and with Project Peace, “there is more cohesion as a staff in terms of how we’re talking about this — there’s a common language.”

Discussing the school culture, and his commitment to creating a bullying-free environment, Gudgel said. “Here we are in this small school, this small community.  We can take this problem on. There is no reason we can’t do this.”

* Anisa Kline is a freelance writer for the News.