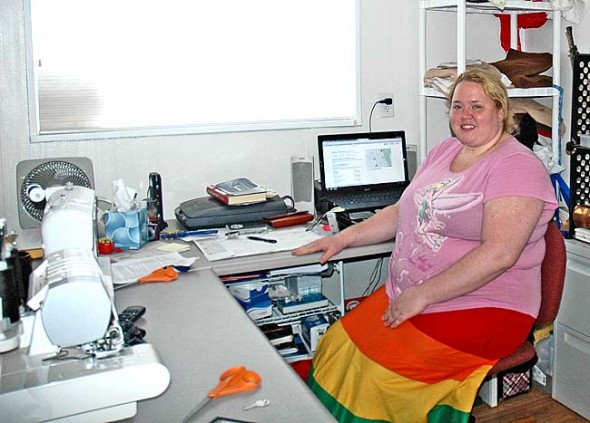 BouChic, the new alterations and dressmaking business in Yellow Springs, sits at the very back of the white professional building on Xenia Avenue. To find it, potential customers walk all the way around the building and past the dumpster to a door with a recently made sign. Inside, owner Zara McCartney has neatly stacked bolts of cloth, drawers filled with a variety of patterns, a dressing room, sewing machines and a chalkboard wall for children who might accompany their parents to a fitting or consultation.

“We fell into this place by fluke,” said McCartney, who found the location through the classifieds in the Yellow Springs News. “I walked in and I didn’t see the Oriental rug on the floor or the blue walls, I saw my shop.”

McCartney, whose mother is an avid seamstress, grew up surrounded by sewing and learned primarily by watching her mother. By middle school she was making her own clothing, but she disengaged from the craft during high school.

“I completely lost interest in sewing from age 17 to about 24,” said McCartney. “I wanted to be a business person.”

Although she went to college to study business, her passion for dressmaking was reignited when her mother fell ill in the early 2000s and McCartney moved in to help care for her.

“I started to sew with her and took off with it. As my mother says, I got ‘the bug,’” says McCartney of that time.

Eventually, McCartney and her mother started a business together, with McCartney applying what she’d learned in college to her mother’s business venture.

“She’d been sewing her whole life and she wanted to do it full time. I was in school for business and I came in and tripled her business.”

In 2012, McCartney moved to Columbus from Akron and set up her own online Etsy shop, BouChic Dressmakers, which specializes in costumes and plus-size creations. When her fiancé finished his masters degree in education from Antioch Midwest a few months ago, they decided to move here and try to put a brick and mortar face to her online work.

“It was go back to Akron where we’re from or come here. The artisan feel of the town drew me,” said McCartney, and it seemed like a good place to try the next phase of her business.

Even though she has only been in business a few months, McCartney has managed to establish a client base in town by offering alterations and repairs in addition to costume and dressmaking. Indeed, her first client, a colleague of her fiancé’s, was waiting in the parking lot the day McCartney moved in. That kind of spontaneous personal interaction has been one of her favorite parts of running an actual shop.

“I love it that people can just walk in,” said McCartney. “Someone comes in and is like ‘Can you do an Elvis jumpsuit?’ and I’m like ‘Yeah, sure!’”

While McCartney enjoys doing alterations, her primary passion is costume design. She particularly enjoys creating pieces with a renaissance, Victorian or steampunk look and much of her clientele are people who participate in the Society for Creative Anachronism or games such as Dagorhir, a live-action role playing game based on Lord of the Rings.

In addition to making historically-inspired costumes, McCartney also sees her craft as a connection to the past and the kind of workmanship that has all but disappeared with industrial forms of production. By offering her skills at reasonable hourly rates, she hopes to make that kind of service accessible again while also having a chance to exercise her creativity.

Although she continues to be mentored from afar by her mother, McCartney’s future plans include attending Wright State to study costume design and technology.

“I’m going to school to learn how to make my own patterns,” she said. “I want to be able to look at a dress and make a pattern for it.”

As a new resident of Yellow Springs, McCartney is also looking forward to connecting with organizations and people in town who are in need of costumes, since it will add to her educational experience, while also allowing her to work creatively.

“Even if it’s just going through their wardrobes to mend and alter the pieces, I want to be involved in the theater groups in town. I hope they find me because I don’t know who they are,” she said of her interest in contributing to the town’s performing arts community.

In the meantime, McCartney will continue to alter and repair the personal wardrobes of Yellow Springs and give shape to villagers’ sartorial visions.

“Pretty much anything you could possibly need done to a piece of clothing, I can do it,” she said.