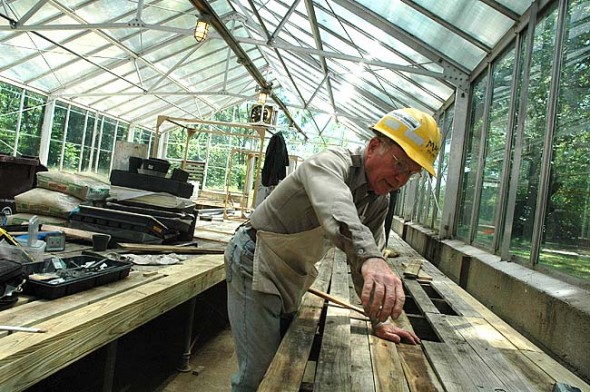 Mac Palmer, ’61, was part of the Antioch Alumni green house crew that spent last week’s alumni work week renovating the glass structure behind the science building. Palmer, 82, and his wife Margery, have attended all but five of the annual work weeks since they began in 1986. (Photo by Lauren Heaton)

Last week about 100 Antioch College alumni returned to campus to engage in the ongoing work, both creative and backbreaking, of rebuilding their school. This summer’s alumni work week focused especially on the demolition jobs needed to be done before the college can start this year’s slate of renovation planned for the Health and Wellness Center, the Theater building and the campus’s central geothermal heating and cooling plant. The chain-link fence that went up around Curl gym a few weeks ago is indicative of where the initial thrust lies.

According to Antioch Facilities Manager Reggie Stratton, the Wellness Center, to be located in Curl gym, is the biggest capital project to get under way this year. With plans for a new fitness center, lounge, locker rooms, two racketball courts and a new pool, the 44,000-square-foot center is expected to cost $7.2 million.

Along with the fitness amenities, the original Curl gym, built in 1928, will get its former windows restored along the upper perimeter of both the “east gym” and “west gym” — this time with double-paned insulated glass. The back wall of the natatorium will be constructed entirely of glass, with access to an outdoor patio to the south. The west gym will be refurbished, and the south gym will continue to be used as a multi-purpose performance and assembly space.

Also with new roofing, insulation and energy efficient lighting, the Wellness center aims to achieve some level of LEED certification, the second facility on campus (after North Hall) to do so, Stratton said.

The new Wellness Center is expected to be complete by June of next year.

A little ways east of the gym, the theater building is also getting some attention this year. The construction is happening ahead of schedule thanks to private donations of $350,000 and a commitment from the Yellow Springs Community Foundation. Though he couldn’t specify the amount of the grant which isn’t yet official, YSCF President Sterling Wiggins expressed enthusiasm for supporting the college.

The theater, 16,000 square feet in total, is ready for an infrastructure overhaul, with new electric, plumbing and HVAC, as well as a partial roof repair on the north side. On the cosmetic end, the theater will also get new and expanded restrooms, new paint in the front hall, an LED theater lighting system, and all new seating on the existing risers in both the main theater and the smaller black box to the south. The theater seats a total of about 250 people, Stratton said. In addition, the college is rebuilding the theater’s dance floor using the wood from the floor of west gym. About a half a dozen alumni spent last week tearing out the old floor and meticulously removing the nails from each plank for the recycling effort.

All told, this phase of the theater building renovation is expected to cost $1.2 million, Stratton said. It is scheduled to start in earnest in July and be completed by Oct. 1, in time for the arrival of Antioch’s third class of students. Phase II for the theater will depend on financing and is projected to include the rest of the roof, all new windows, and a new set workshop, he said.

Both the gym and the theater, as well as the science building (currently in partial use for both the science and art programs) are to be heated and cooled by the central and primary geothermal plant, another major construction/renovation project slated for this year. The geothermal wellfield consists of 150 wells each 300 feet deep and will be located on the campus golf course. The system uses the steady temperature of the ground to heat and cool water whose energy is then converted to either the heating or cooling needs of campus facilities. The converters, including heat pumps, chillers and heat exchangers, will be located in the maintenance and engineering building just south of the library.

When the geothermal project starts in September, maintenance staff will relocate to an existing structure south of the Kettering building, as the maintenance building itself will also benefit from a new roof, windows and restrooms.

The cost of the geothermal system and trenching to the first three buildings is expected to cost around $4.2 million. That phase should be completed by April 2014. (In the meantime, the theater building, which will be up and running this fall, will be heated with a rented gas-fire unit until it can be connected to the central plant.) Phase II of the geothermal system, again dependent on the availability of funds, will include serving the heating and cooling needs of South Hall, McGregor and possibly the library, Stratton said, by trenching and laying pipeline from the central plant to those buildings.

The Wellness Center and the theater building constitute the third and fourth renovation projects since the college reopened in 2011. Last year the college put $3.6 million into reburbishing some of the science building laboratories and classrooms, and $5.7 million into a complete renovation of North Hall dorm and cafeteria, with a secondary geothermal heating system. Phase II of the science building is projected to cost an estimated $7.4 million and will accommodate both the science and the art departments for the foreseeable future, Stratton said.

“We want to get that done in the next few years in order to allow the arts program to grow,” he said.

In terms of dorm space on campus, Antioch anticipates that Birch Hall and North Hall have enough space for the first four classes, with Case Commons (behind the Coretta Scott King Center) available for additional needs. By 2017, the college expects to have one more dorm online, perhaps either a renovated Spalt dorm or a new building on the horseshoe where Spalt now stands.