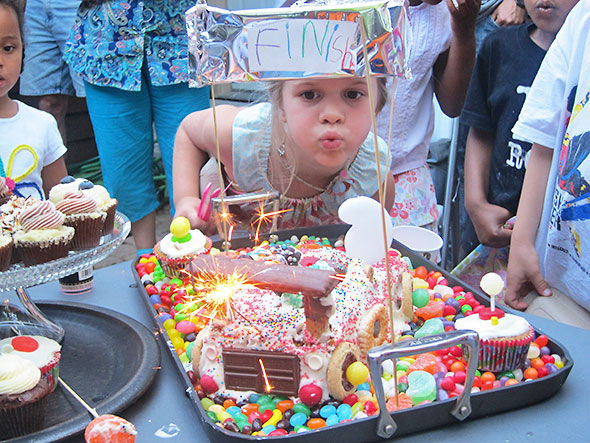 My five year old is now my six year old. We celebrated my daughter’s birthday this week in an evening party for her best buds and their families. We invited families over for dinner and cake. Dinner we kept kid friendly and simple: steamed string beans, cooked brown rice, and grilled kabobs of mushrooms, onion, cherry tomato, and lamb marinated in spiedie sauce. 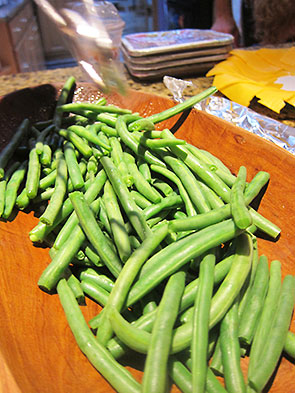 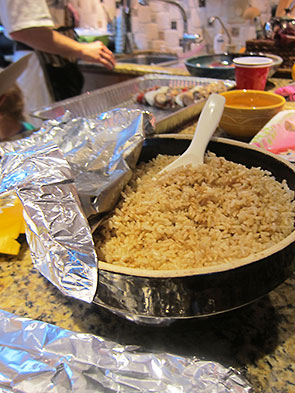 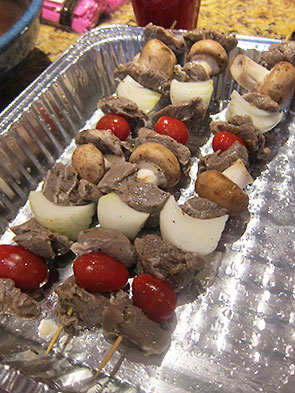 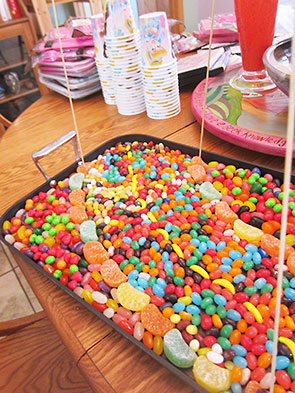 Simple was a good and necessary thing because dessert was resplendent. Our daughter requested a princess party to “drive the boys crazy”. Stalled for inspiration, I had yet to settle on her cake when, the day before the party, we got a prescient notice from the library. Our request was in! We checked out Wreck-It Ralph, a wonderful Disney film based on video arcade games. As we watched the main characters bake and decorate a candy coated car for the speed racer game Sugar Rush, my daughter and I knew what must be done.

First thing the next morning, we made a track of jelly beans and fruit chews. Then we baked a carrot cake in a loaf pan for a car. Per the movie, the car could be an amalgamated frosting covered spludge, but my daughter insisted on more….a driver, specifically she selected aviator Venellope Van Schweetz to be coronated Princess Venellope for the occasion. No pressure. After setting me this challenging goal, she set about constructing the start and finish lines. 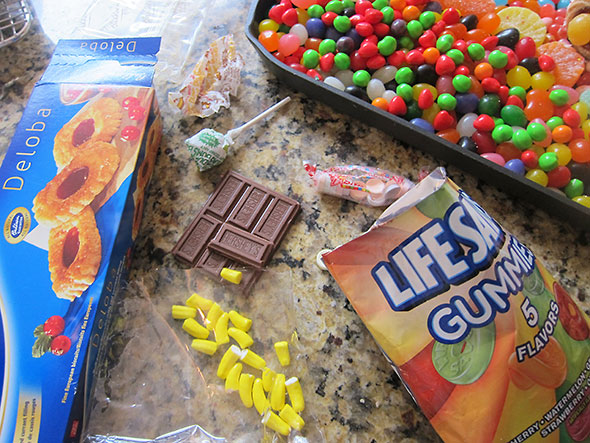 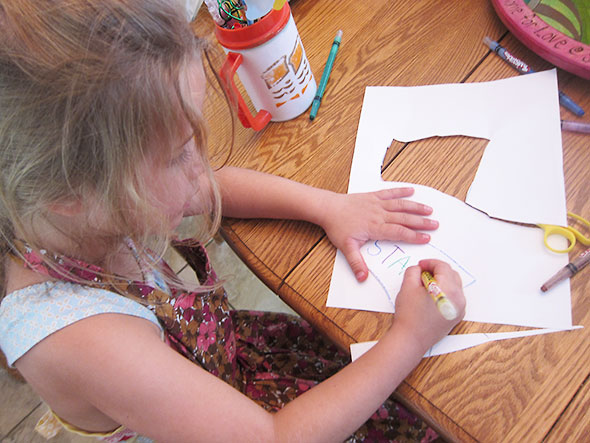 Ok, candy…I dumped our trove of uneaten easter candy and took stock. Among the hard candy and chocolate bars were two pink malt balls nested among chocolate mint patties. I crowed. I drew a face on one pink malt ball using food-safe markers and added the broken up patties for hair. I figured out how to make her neck using a pink Starburst and, then, her hooded sweatshirt from a marshmallow and green sugar leftover from Christmas cookie decorating. 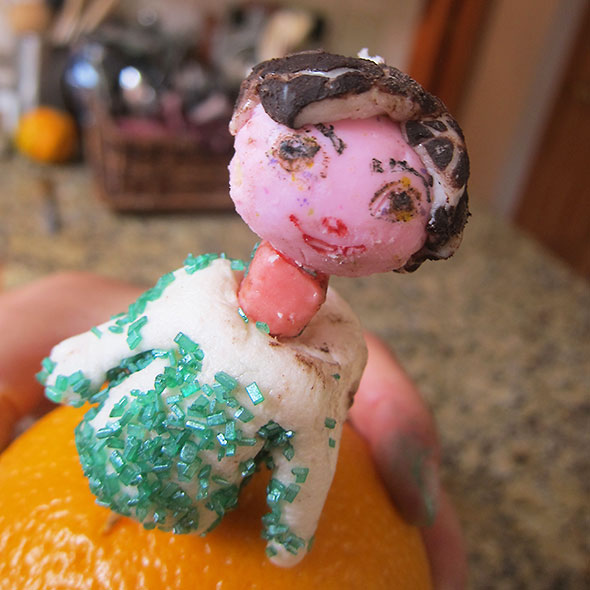 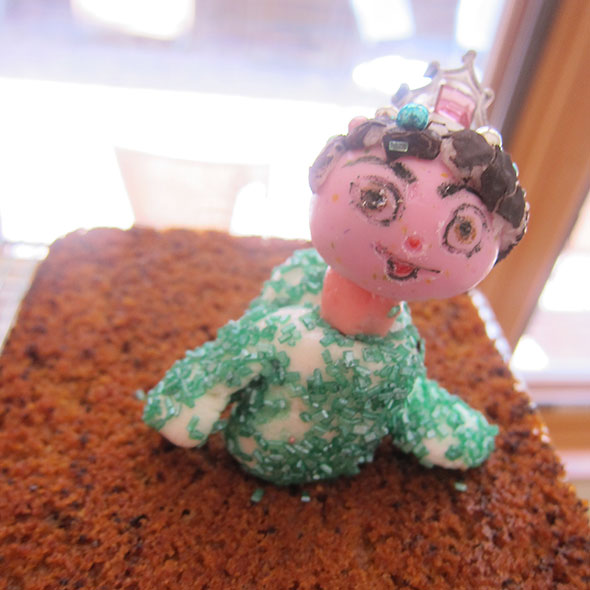 As I worked, though, Venellope began to melt in my hands. I looked at her sweet face and sighed. Time to start over. Using my second and last pink malt ball—again, no pressure—I drew on the face while holding the ball in foil and attached the neck to the head with a toothpick speared through the starburst chew. Setting the head aside, I constructed the torso using a single marshmallow. I cut the marshmallow three times: angled up the back for the hood and, then, two snips on either side of the main body for the arms. To make Venellope’s hoodie a pixelated green, I rolled the cut marshmallow—lightly dampened—in a bowl of green sugar. I speared the head and neck onto the body with the toothpick and speared the figure three more times to seat Venellope on the cake loaf with her arms raised. Finally I added her hair working quickly to keep the chocolate from smudging and crowned her head with a jeweled ring—a prized token of my daughter’s. 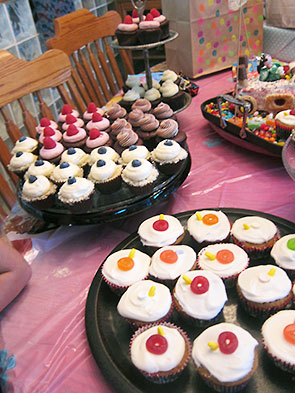 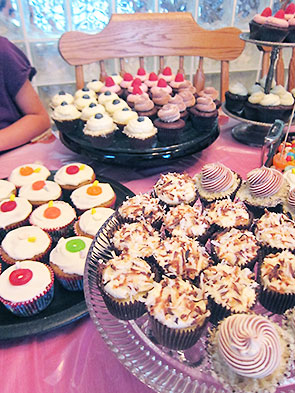 Returning to the racecar, I used two chocolate dipped wafer sticks for the car’s console and—using toothpicks again—mounted two wafer sticks on the back to hold a candy bar spoiler. Before adding the Heath Bar spoiler, I covered the cake with buttercream icing that my husband made—wow, honey, you’re hired—and we dusted the car with sugar and sprinkles. A candy carrot and lifesaver made up the steering column. Another lifesaver and a candy apple served for headlights and a square of chocolate for the license plate.

The charming Princess Venellope Von Schweetz needed a host of adoring fans to cheer as she crossed the finish line. For a crowd of cupcakes, I called in the cavalry. The elegant Three Leee Cupcakery furnished 5 dozen mini cupcakes in a dazzling array of flavors—chocolate, lemon, vanilla—all gluten free, heavenly moist, and delicious. My favorite was the lemon topped with toasted coconut, but that may because the raspberry topped chocolate vanished before I had my chance. 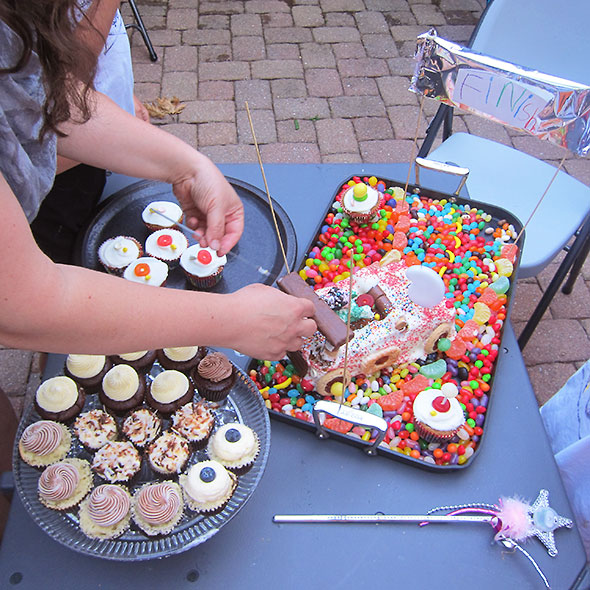 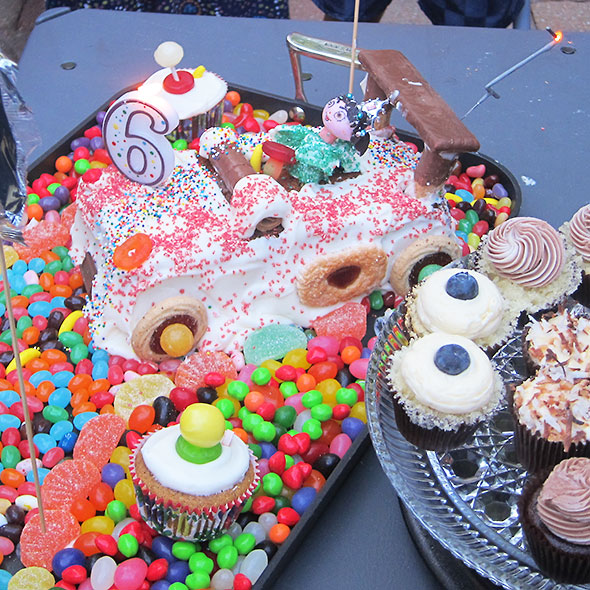 As the cupcakes and children gathered around the cake car, we lit it up with a candle and a sparkler; and my daughter positioned herself at the end of the track for the big finish. 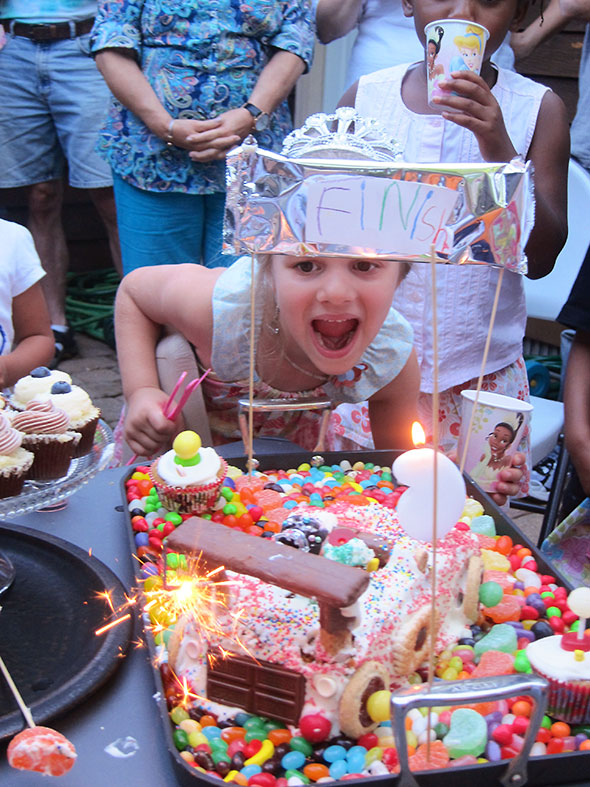 In time honored tradition, after cake, presents were opened. I love how my daughter lingers over the presents prepared at any moment to take off and play with a new treasure even as her friends take her in hand to open the next gift. The family present was a special creation…a faerie house by village artist Sharri Phillips. I’ve loved Sharri’s pieces ever since her exhibit Faerie Real Estate at the Emporium in 2011. 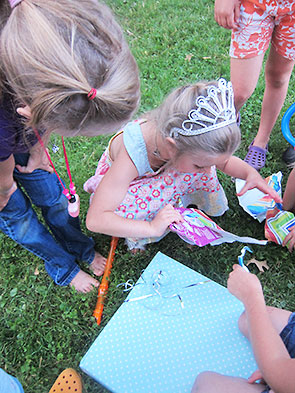 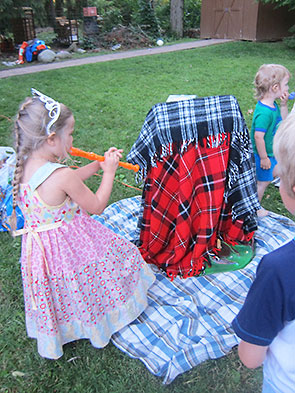 We took home a quilt from that show and more recently were enchanted by this house that went on display at the Emporium. The house has three levels, a swing, a picnic table, and trimmings in yarn, sparkling jewels, and flowers. It even has a string of lights woven into its structure making it a glowing beacon of delight for the children. They gathered around…young and old, boys and girls…to drink in its magic. 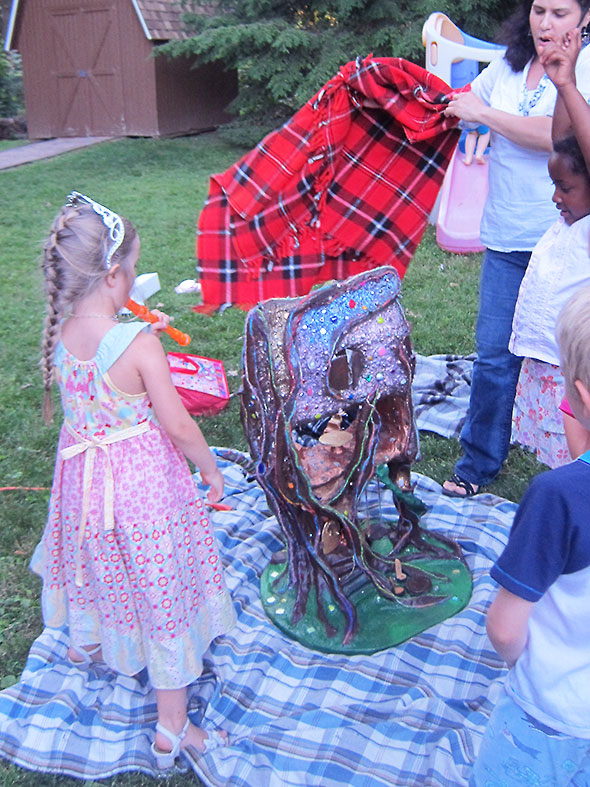 In the aftermath of the party, Jeremy and I collected our memories amazed again at the warm reception we have received perfectly embodied by the crowd of 40 townspeople who joined us to celebrate. From almost the first moment, music filled our home as the children of each family played at our piano and other instruments they brought along. 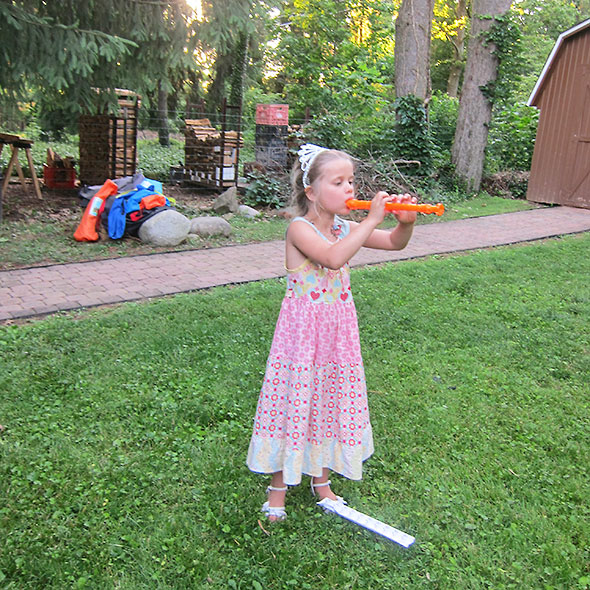 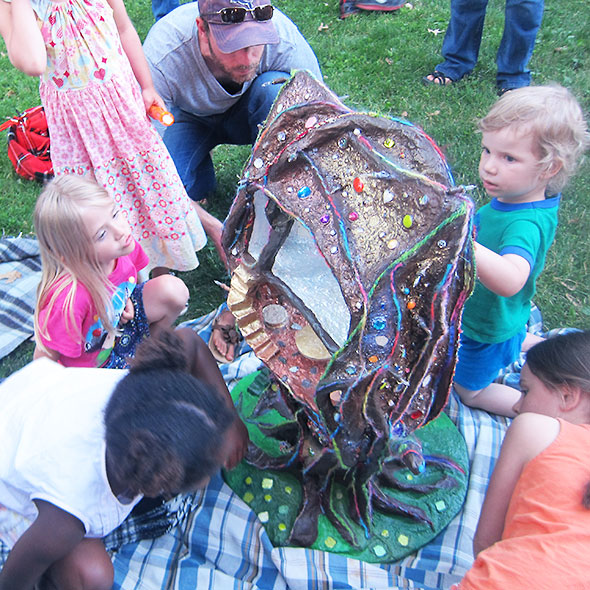 The morning rain had refreshed the lawn to a brilliant green and retreated in time for the afternoon sun to wick the grass dry. We fell from treat to treat, in a candy colored sugar rush, discovering…as the characters Ralph and Venellope learned…that standing together and challenging each other beats the pants off of enduring alone.