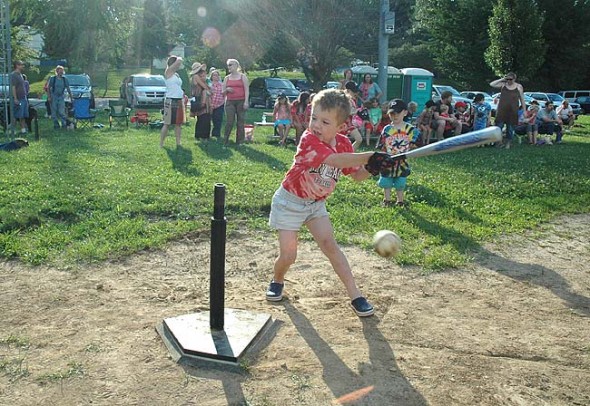 Swing, swing, swing! Perry League t-ball kids and parents have been carrying on in honor of Coach Jimmy since the accident two weeks ago when Jimmy Chesire sustained a serious head injury after a fall at Ellis Park. On a recent Friday night Quentin Branlat, above, gave his swing all he had, and sent the ball flying. Chesire continues to improve at the Kettering Medical Center, and will soon be moved out of Intensive Care, according to Facebook updates from his wife, Robin Suits. See a report on last Friday’s t-ball outing by parent Geneva Gano on page 10. (Photo by Matt Minde)

Each week, a little t-ball miracle

While I am a newcomer to reporting on t-ball, I’m pretty sure that a t-ball miracle happens every time we play. That’s how last Friday began: with a t-ball miracle. It was supposed to be a real scorcher, and the National Weather Service had issued a heat advisory. The sun had been beating down on Yellow Springs in a “feels like 102” kind of way for the past two days. How could we play ball in such oppressive heat? I wondered if anyone would show up.

Show up they did, in droves. And, miracle of miracles, the sun moved behind some clouds and sat there the whole time we played, and a little breeze kicked up. From 6:30–8 p.m., it was perfect t-ball weather.

We took advantage of it. Kids, parents, grandparents, neighbors and visiting cousins from out of town hit, ran, fetched balls and all the usual stuff. One of the most enthusiastic and determined players was little Kaylee Clark, 2, who camped out at shortstop for at least 20 minutes all by herself, making huge plays and no errors. Though she can sometimes lean into the loving arms of her mom, Jen, and look away shyly, on Friday night the steely expression in her blue, blue eyes was unwaveringly determined: it said, “play ball.” Also very, very serious about their game were Reagan “Roo” Hankie, Roy Gano, Anaya Adoff and Elijah Yelton, all 5 years old, and each of them astounding hitters and excellent runners. It’s that time of the t-ball season when a committed 5-year-old really starts to “peak.” Elijah wielded the “fire bat” like the Babe himself, Anaya’s perfect form at bat was matched only by her precise hit placement, and I think that I speak for all of us parents when I say that my son Roy’s high-stepping, breathtakingly speedy stride made us all feel a bit tireder after he crossed home. Roo’s leggy running “all by herself” was itself something of a miracle if we recall that her mom, Erin, has spent the past four years running them by her side. All of these superstars received their high-fives at home plate from Coach Amy Boblitt. Defensive talent was peaking as well: Mateen Sajabi, 6, and the dynamic duo Michael and Sammy Trelawny-Cassidy, 5 and 7, worked both infield and outfield. Not a ball got past these young men, and it was roundly noted that more than one Perry Leaguer would make the short list for the prestigious Gold Gloves.

The miraculous joy of t-ball was evident in the new skills brought to the field by 3-year-old Orion Sage-Frabotta, whose fun-loving dad Tony had coached him in the fine art of sliding into home base. With a gleam in his eye and dirt on his uniform, Orion slid into every single base, all night long. Tony and all cheered him on, and voila! we have the makings of another Rickey Henderson on our hands. An unstoppable slider.

Three-year-old Justus Walker was an expression of t-ball joy. Though he started off fielding, he quickly realized that he could hit, too. He was delighted! Next thing we knew, he was an insatiable hitting machine. He must have modeled himself after his superstar big sister, Peyton, 7, who knocked it out of the park more than once. Though this was their first time to t-ball in this town, these kids were naturals! We knew they were meant to be on our team, and I think they felt the same.

“Do we have t-ball every night?” asked Peyton at the end of the evening.

She said, “Oh,” and seeing her love for the game, I wished it would be Friday again sooner than usual.

Old hands like Tommy Moore, 5, who has been to more t-ball games than he can count, also were wanting more. As bases, balls and bats were put away, this thoughtful young man looked up at me intently and said, “Now what?” It felt like the end of t-ball to me: we’d done our closing stretches and our run and our cheer, but Tommy’s batting gloves were still on. Suddenly I felt very unsure, like maybe we’d forgotten something that Coach Jimmy always did. Maybe it was Something Important. I felt wary.

“Well, what do we usually do?” I asked. “Well, sometimes we get trophies,” he said. Oh, yes, the trophies. It was something important. “Yes, we get those on the last day,” I reassured him. “How many days until we get trophies?” he asked. I guessed “22,” which seemed a good guess, and Tommy nodded and you could tell that he was also wishing that time would pass more quickly. And that is part of the miracle of being a kid: your summer lasts forever and a day, and trophy night can’t come too soon.

This Friday night, I think we were all feeling that the t-ball miracle was ours to share. Fewer than two weeks after his terrible accident, our Coach Jimmy was making progress. We’d heard that he is smiling and talking and reading “Get Well Soon” and “We Miss You” letters from his team. Word is that he said those words we’d all been waiting for: “I need my uniform.” More than one of his loving team volunteered for the honor of bringing it to him. And pretty soon we will be able to visit him for hugs and high fives at Kettering Medical Center.

In the words of Coach Jimmy, “That’s our Perry League, Yellow Springs’ t-ball program, our beginners baseball program for girls and boys aged 2–9. We welcome all our community’s children regardless of race, color, creed, national origin, sexual preference, ability or disability. You can begin play at any time and there is no requirement to come every week. We’ll be out there, at Gaunt Park, for the next three Friday nights from 6:30–8 p.m. — we only cancel if there’s lightning, or if it’s pouring down rain, right at 6:30 p.m. So if you have a kid who wants to have some fun hitting a baseball, running the bases, doing some fielding, or just hanging out with a bunch of other kids, then come on out. We’d love to have you, we really and truly would.”