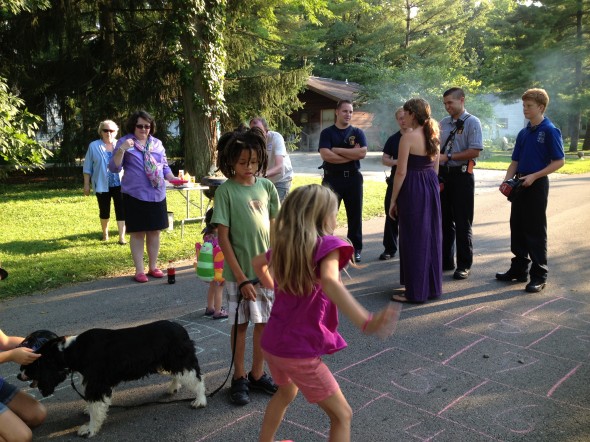 Hopscotch and conversation at the Stafford and Union streets block party on Saturday, Aug. 17.

August 1 marked my four year anniversary as a resident of Yellow Springs. In that time, I’ve hiked the Glen, spent time at the farmers markets, eaten cookies and cider at the Halloween bonfires and bandied myself and my family about town at my leisure. But in all that time, I had yet to attend one of the annual block parties until last weekend. For that matter, I’m still unclear on the actual definition of a “block party;” it’s one of those terms that gets stuck in the gray space in my brain, like “trousers” and “pony.” I mean, in theory, I know what all these words mean: trousers are something you wear on your legs and derriere that most American folk call “pants,” and a pony is a horse of some sort, I guess. And a block party is a party. And it probably happens on your block, though I’m told this is not always a requirement.

Semantics aside, for the past three years, the block party has coincided with the birthday weekend of my daughter. For the first two birthdays, it seemed like a little too much partying for a baby and her chronically exhausted parents. This year, however, things have gotten easier: the baby is now a toddler, who walks around on her own and carries her own stuff and even carries some of my stuff if I can trick her into it. We’re generally a more well-rested bunch these days, and the thought of two parties in one day didn’t seem like such a big deal. We basically just moved the tables and the food from the birthday party about 50 yards down the street to where the block party was commencing.

By six o’clock, the road blocks were set up, and neighbor Basim Blunt, operating under the moniker DJ Hippy, had set up speakers and was providing perfect party music. He started the evening with upbeat, poppy tunes everybody knew: I made a fool out of myself when Human League’s “Don’t You Want Me?” played, screaming that it was my favorite song, singing loudly and, heaven help me, dancing. It is not, in fact, my favorite song, but any song to which you know all the words at a party suddenly feels like your favorite song.

It was a rare moment when I could bring my still-new-to-me Yellow Springs life together with pieces of my previous world: my dad and youngest sister, Madison (who just started middle school this week; where does the time go?), were visiting last week, and came down to the party with us. My dad sat in a camping chair and chatted with my husband Anthony and my friends Erica and Caleb (who are not from our block, but who I brought in as ringers because they’re awesome). Madison played the role of friend and beloved protector of my daughter, Lucy, and her friend Rudy Mae, who both looked up at Madison with awe as she shepherded them down the plastic slide we’d set up and helped them with their sidewalk chalk drawings.

At one point in the evening, Linda Rudawski of the Human Relations Commission, which sponsors the block parties, came by with some announcements, which ended with a real surprise: a performance from juggler Tony Steinbach, who has performed in the past at Street Fair and will perform at this year’s Ohio Renaissance Festival.

Undoubtedly my favorite part of the evening, however, was when a Miami Township Fire-Rescue truck pulled up at the end of the block and four MTFR volunteers began walking toward us, all in a row, looking like they had serious business on their collective minds. Block party organizer Victoria Roe wondered aloud, “Uh-oh. Did I do something wrong?” 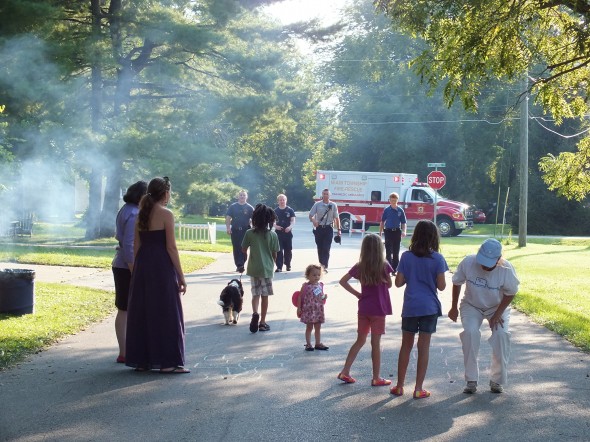 She had, of course, arranged everything perfectly, and the volunteers did indeed have serious business: the handing out of plastic firefighter hats to all the assembled children. As well as a few adults (guilty as charged). It was a great evening, which I hope my family will be able to repeat next year, when Lucy will surely be old enough to carry everything down the street herself. 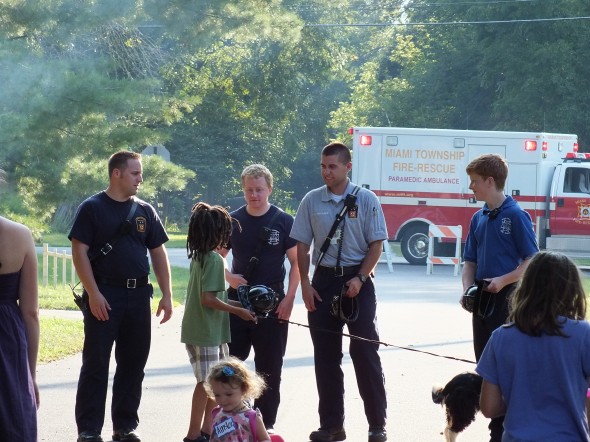 MTFR volunteers make happy campers of all the little (and big) party-goers. 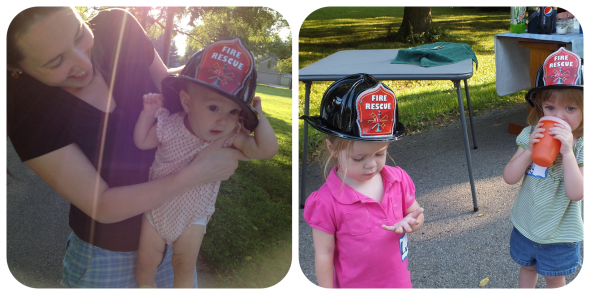 Pearl Bachman (with mom, Megan), Lucy Shows-Fife and Rudy Mae Wyant all give serious consideration to their futures as fire fighters.