Project-based learning (PBL) is at the fore this year at Yellow Springs schools, and Mills Lawn is no exception. Teachers there aim to complete at least nine weeks of PBL throughout the year for each of their classes. But Mills Lawn has other goals for the year, which started Aug. 21, including a new social inclusion program, developing a unique identity for the sixth-grade class, more music and P.E., and incorporating 60 laptop computers into the student-led investigative curriculum. Mills Lawn also welcomes two new teachers, one of whom was hired last week to accommodate a larger than expected kindergarten class.

Anti-bullying has long been a focus for Mills Lawn teachers and students, who use programs called Love and Logic and Responsible Classrooms to build positive classroom cultures and loving but honest communication skills. But according to Mills Lawn Principal Matt Housh, teachers feel that more could be done. Last spring Mills Lawn Counselor John Gudgel and several teachers attended a “Safe School Climate” conference sponsored by Antioch University Midwest and Antioch College that inspired a deeper look at the inclusion skills and attitudes they had been cultivating. According to conference speaker Kim John Payne, while traditional anti-bullying programs often drive bullying underground by isolating and further stigmatizing the bullies, social inclusion helps students to understand that “there are no bullies, just kids who are hurting,” Housh said. The goal, rather, is to go from a culture of tattling to a culture of telling that encourages students to share their problems and resolve them not through blame but by talking out their issues.

“Kim John Payne said that ignoring bullying by walking away doesn’t help but gives implicit permission,” Housh said. “Instead, we need to acknowledge that it happened and correct it. It makes sense, and it matches what we’re already doing, but it takes it a few steps forward.”

The program encourages the use of peer mentors to facilitate conflict resolution, and the school hopes to empower sixth-grade students to lead their younger counterparts through “no blame meetings” that imply that conflict is natural and that peaceful resolutions can be achieved through direct communication. Ultimately the school aims to develop a new social inclusion policy based on its experience this year. And the teachers also hope to connect the inclusion concept to an art residency in which students can express their emotions through different creative outlets.

The mentorship concept fits well with the school’s goal to give the sixth-grade class a special identity as the senior members of the student body who will soon be transiting to a new phase in middle school. Teachers Sarah Amin, Jody Pettiford and Vickie Hitchcock will help the sixth graders to take some ownership of the school’s culture, including perhaps redesigning the kickball wall in the school yard, as well as performing service projects for the wider village community.

Inviting elder students to act as mentors links to the peer feedback piece that is integral to PBL. As students work together to define the academic problems they’re interested in solving, so too will they be critiquing each other’s work and helping each other to improve.

Mills Lawn teachers started the year with a three-day workshop on PBL led by a mentor from High Tech High School in San Diego. The school will use all of its waiver days this year to further train teachers, and the district is also retaining a part-time PBL coach, Kate Cook, of the Dayton Regional STEM School, to support all of its teachers to couch as much of the curriculum as possible in real-world learning through solving problems. At Mills Lawn the focus will be on cross grade-level projects, such as last year’s illustrated guide to Glen Helen, which involved a study of the Glen by both first-grade and fourth-grade students, who then illustrated and wrote a book about their experience. Fifth- and sixth-grade students will also be involved in World Wide Monitoring Day on Sept. 17 with scientists from Xylem, who will establish water testing stations around Ellis Pond. The event will likely lead to projects that will help students develop math, science, history, art and other skills, Housh said. Other projects could center on the local ash trees being destroyed by the ash borer, the kickball wall, and things within the school that students feel compelled to address.

“We’re excited about kids getting involved in the real-world with things like clean water and bullying, which are issues we really do need to solve,” Housh said. “It’s engaging kids to be change workers.” 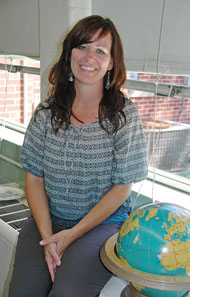 With more students than the school has had in recent memory, including three sections of kindergarten, first, fourth and sixth grades, according to Housh, the school has filled all of its classrooms and is “maxed out” for the year. The last-minute addition of a kindergarten class led the school to redirect an existing teacher and hire new first-grade teacher Shannon Watern, who begins her first year as a teacher this year. Watern grew up in Arizona, where after college she spent 10 years as a case worker and youth mentor for children in group homes and foster care. Having always known she wanted to work with children, Watern returned to school for an education degree and has lived in Englewood with her family for three years.

Third-grade teacher Jessica Liming is also new to the profession, having spent last year as a long-term substitute at Fairborn Primary just after earning an education degree from Antioch Midwest in 2012. While subbing, Liming also earned a license as a reading specialist and plans to focus on improving literary skills for all of her students, she said this week. Liming learned that she wanted to teach while volunteering for ARKS, a faith-based after-school program for underpriviledged children in Fairborn. She helped youth with homework, played games with them and focused on “letting 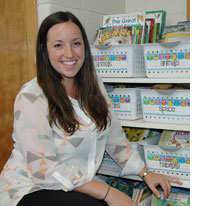 them know someone cared.”

“That’s when I knew this is my calling — this is what I’m supposed to do.”

Mills Lawn has also hired Jane Jako as a new kindergarden paraprofessional aide, as well as librarian and media specialist Eli Hurwitz, and band and orchestra director Brian Mayer, both of whom serve the entire school district. Scheduling this year allows students to spend two hours per week (instead of last year’s one) in music classes, as well as slightly more time in art and physical education classes.