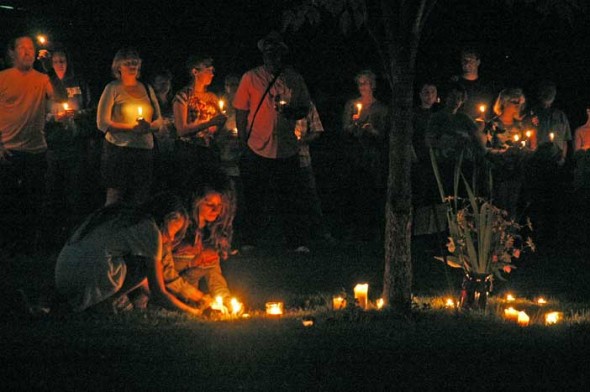 Villagers laid their candles under a tree at Mills Lawn in memory of Paul E. Schenck. (photo by Lauren Heaton)

The day following a shootout in Yellow Springs

Update Aug. 1, 2 p.m.: The Village of Yellow Springs held a press conference this morning to invite residents to the community counseling session described below. Village Council President Judith Hempfling read a statement thanking the team of responders to the July 30–31 incident, including the Village staff, the Yellow Springs police and dispatchers, Miami Township Fire-Rescue, the Greene County Sheriff, and the many other departments who came to aid in the standoff. Hempfling also stated that Village leaders were “holding in our hearts and prayers” the caregivers, neighbors, family members of gunman Paul Schenck. She also said the Village hoped the counseling session would “help our community to heal from this tragedy” and encourage residents to “care for one another to help us heal and move forward” from the current state of “shock, sadness and grief.”

Village Manager Laura Curliss encouraged anyone in the village who feels the urge to process Tuesday night’s incident to attend one of the two events, happening concurrently tonight at 6 p.m. at the Bryan Center. Villagers are also invited to come and interact with a canine crisis companion, recommended especially for children who have experienced any kind of trauma, she said.

Several other media representatives attended the press conference and asked follow-up questions about the investigation, though Curliss referred most questions to the lead investigating agency, the state Bureau of Criminal Investigation. In response to one question about the Hyperreach announcement that went out to village residents at 11:30 suggesting that residents on Stafford Street vacate their homes, Curliss said that it was unclear which agency sent the message out, and that it may have been somewhat of a mistake. According to MIami Township Fire-Rescue Chief Colin Altman, when he saw people coming out of their homes to watch the events on North High STreet unfold, it ococurred to him that residents needed to be informed about what was happening, and he arranged with Xenia Central Dispatch and the YSPD to send a message out. Which agency generated the actual text, neither Curliss nor Altman could say.

Posted Aug. 1, 6 a.m.: Over 100 people gathered at Mills Lawn last night to remember local resident Paul Schenck, who was killed after a gun fight at his home on North High Street. The candlelight vigil led by local pastor Aaron Saari included singing and the ceremonial laying of candles beneath a memorial tree.

Several Village Council members were present and announced that the Village will offer counseling and counseling training services for the village through the Ohio Crisis Response Team on Thursday, Aug. 1, from 6 to 7:30 p.m. at the Bryan Center.
The two sessions to be held are:
1) The first (on the second floor) for persons living in the neighborhood near 310 High Street
2) The second (in the gym) for the community in general
Council will hold a press conference at 11 a.m. on Aug. 1 on the second floor of the Bryan Center to discuss the OCRT visit. For more on OCRT go to http://www.ohiocrisisresponseteam.com.

The counseling and the vigil were the community’s response to the sudden firefight and all-night standoff that took place at Schenck’s home at 280 North High Street between 10:45 p.m. on July 30 and 4 a.m. on July 31. At a press conference on the afternoon of July 31, the Village presented a joint statement by four Greene Council law enforcement agencies, followed by questions about the details of the previous night. (See a video of the statement in yesterday’s post).

During the question and answer period, police said that due to the large size of the crime scene and the number of shots fired, more investigation is needed before releasing information about how and why Schenck’s death occurred. Police could not yet say, for instance, exactly how many bullets were fired from either Schenck or police, or what kinds of weapons were used. Greene County Sheriff Gene Fischer roughly estimated that Schenck fired “several dozen rounds” into the neighboring houses and at police cars, one of which ripped through a patrol car door. In return, deputies fired just four rounds, careful not to outgun the shooter. Though deputies had to dive for cover as they took fire, no officers were injured in the fight, he said.

As soon as police arrived they located Schenck on his property, where he remained, outside initially and later inside the house, the entire night. Yellow Springs Police Officer Pat Roegner was the first officer in charge (Yellow Springs Police Chief Anthony Pettiford was out of state at a conference until Wednesday afternoon) until the SWAT team took over, organizing the 62 units who responded to the call to form two perimeters around Schenck’s property — an immediate one to protect the surrounding neighbors, and an outer one in case the suspect tried to flee. Helicopters from the Ohio State Patrol were at the scene to provide overhead light in case Schenck attempted to escape.

On who gave the order at 11:30 for residents of Stafford Street to vacate their homes and why, Curliss said that because such a high volume of bullets were flying in many different directions, police were at one point encouraging nearby residents who weren’t in direct line of fire to leave the area to avoid getting shot in their homes.

In response to a question about an incident in 2009 involving Schenck, Yellow Springs Chief Pettiford said that the department did respond to a disturbance call at Schenck’s home at the time and confiscated an undisclosed number of weapons “for safety purposes.” By court order a year later the guns were returned to Schenck.

In terms of next steps, the state Bureau of Criminal Investigation, the lead investigator, will continue to process the crime scene and interview the neighbors, with support from Yellow Springs officers. Further information will become available as the investigation unfolds, the deputies said.