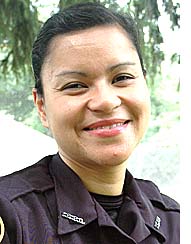 Growing up in São Bernardo, near São Paulo, Brazil, Luciana Lieff never would have considered law enforcement as a profession. The police she knew were underpaid military personnel working in a system infused with corruption. In Yellow Springs, however, policing seemed to be a completely different animal, one she felt she could tame to fit her desire to connect with people and help them whenever possible.

Lieff is one of the newest officers to join the local police force, along with officers Jon Matheny, who came to the department in May, and Josh Knapp who joined in November. The new hires bring the department to a current staff of eight full-time officers, the number the Village has indicated within the past year that it needs for safe and continuous patrol of Yellow Springs. With an additional staff of about six part-time officers, Police Chief Anthony Pettiford said this week that the decision to hire additional officers will depend on the Village budget.

Lieff came to the U.S. as a college student to get fluent in English. She was studying industrial informatics at the time and wanted an advantage to get a good job. Her four siblings were still living at home, and she didn’t want to be an extra burden, she said. She went first to Maryland on a work visa as an au pére, and then she met a pilot, who was just buying a home in Yellow Springs. They married and moved here in 2001.

Policing was the profession that Lieff’s personality and job skills tests kept pointing to when she indicated she liked to work with people, help people and help out in her community. So when she signed up for classes at Clark State Community College in 2010, it was in the criminal justice field. She went on to Police Academy at Greene County Career Center, graduating last year. Yellow Springs is her first post as a police officer.

Lieff, who is currently in training with the other officers, says what she’s found on the job so far confirms her desire to be of service. Policing in Yellow Springs is different from the aggressive, macho profile that often appears on television and pervades larger city departments like São Paulo, whose officers are so busy with violent crimes that they don’t have time to respond to calls about minor disputes and mediations.

“Here you can help people. You see problems and work with the community to find solutions. That’s the kind of policing that interests me,” she said. “The less proactive we are, the more reactive we have to be, and that leads to an aggressive kind of policing. I’d rather tell someone they left their garage door open at night so we don’t have to go there the next day to investigate a burglary.”

Lieff is also grateful to work and live in the same town where her two young children go to school. Now she doesn’t have to worry who will be educating them about scary things like burglaries and active shooters — she can do it herself.

The village is also a more diverse community than she imagined, and she has found many others in the region who have formed a sub-community of Portuguese speakers. Her native language, which is very similar to Spanish, also allows her to be of service to the small but present Spanish-speaking population in the area. 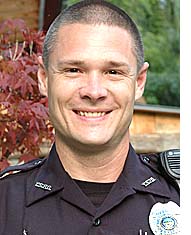 Police officer Josh Knapp served the City of Fairborn for nine years before deciding to drop back to a department that operates at a whole different speed. Fairborn was his first post after police academy, and he was busier than he thought he would be in the relatively small military community of 34,000 people.

“The first couple of years I was extremely shocked at the violent crimes that happened — there was a lot more drug-related crime than I expected,” he said.

The call volume was often more than the modestly funded department could handle, and so minor calls about suspicious persons or calls for assistance got displaced by more emergent situations such as burglaries, domestic violence and assaults. Though he loved his job, Knapp said he got “burnt out” at one place for so long and wanted to make a career shift.

Needless to say, serving in Yellow Springs since November has been an entirely different kind of policing, and one that has allowed Knapp to “focus more on the policing side” and follow up with the complaints and investigations he never had time for in Fairborn. He investigated three of the burglaries related to recently indicted suspects Oliver Simons and Bianca Stone, for example. And he has found more time to get actively involved with the community here, helping to educate people about ways to be safer and protect their property by locking windows and doors and reporting suspicious people to the police.

Knapp, 33, grew up on a livestock farm in Cedarville Township. Several of his family members were in the law enforcement field, and after attending Sinclair for two years, Knapp headed to the Ohio State Highway Patrol Academy. He currently lives outside Cedarville with his family, including two school-age children.

Even though he works nights, Knapp has already gotten to know most of the business owners in town and has felt the strong bond that villagers have with each other, he said. He has also found that villagers here are mostly kind and courteous to police and, contrary to previous experience, welcome police presence and see it as a “comfort” rather than a threat. That view has enabled Knapp to practice his role as a source of support in the community.

“As an officer I just try to be as positive an influence in the community, and be as respectful as possible and as helpful as I can,” he said. “There are more opportunities to help someone for whatever they need.” 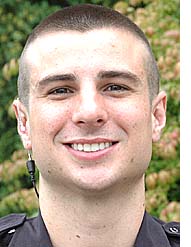 Though he has only just begun his first policing post this spring, Jon Matheny has found it a slight adjustment moving from his former position as a jailer at Fairborn city jail. Going from a place where most of the inmates have lost at least some of their civil rights, to a village where residents know their rights quite well and demand free exercise of all of them, has been eye-opening, Matheny said this week. But it’s a change which the 23-year-old officer is happy to make.

“There are a lot fewer citizens here and a lot more opportunities to do proactive things,” he said. “It’s a different type of policing.”

Matheny joined the department in April and is nearing the end of his field training period. He likes the village, and finds it an accepting place that attracts lots of weekend tourists. Having worked in a grocery store for four years as a teenager in Jamestown, he is used to the small-town feel and knowing everyone by name, he said. Because of that, he finds it easy to spot people who aren’t from town and makes an effort to introduce himself to them.

Matheny’s experience in Fairborn was very eye-opening, he said, seeing people under the influence of drugs and alcohol and sometimes at rock bottom. But an internship in the probation field allowed him to see that sometimes people can make the wrong decision and end up spinning out of control, and they just need a little help to get back on track.

“Sometimes the only difference between us and them is one bad decision,” he said.

Matheny grew up in Jamestown, graduating from Greeneview High School and attended Sinclair and Wright State before signing up for the criminal justice program at the Greene County Career Center, where he and Lieff matriculated in the same class. He lives in Huber Heights with his ailing father and still works part time at the jail.