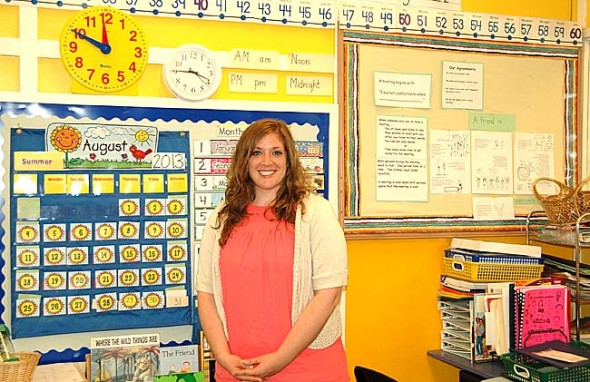 After spending much of the summer preparing for the school year in an empty classroom, new Antioch School teacher Christine Lipari-Althaus is ready for the buzzing joyful energy that her students bring to the space.

“I love the wonderful energy that comes around schools,” she said during a recent interview. “I’m looking forward to spending time in the school with kids in it.”

A resident of Yellow Springs, Lipari-Althaus had been working in a Reggio-inspired early childhood education program in Troy when she saw a classified in the Yellow Springs News advertising the position of head teacher for Antioch’s Younger Group classroom.

“It was amazing that they had an opening,” says Lipari-Althaus, since staff turnover at the school is generally very low. “I’ve always thought that Antioch School was a wonderful place and I liked how they were interested in working with children so that the students had a lot of input in their time and direction in the school. I thought we would be a good fit.”

Chris Powell, head teacher for the Older Group and a member of the hiring committee for the position, agrees.

“We were looking for a teacher experienced not just in teaching but in being able to observe children,” says Powell. “Someone with a deep understanding of the child development process and when we observed Christine in the classroom, we saw that she had that. She was able to really look at each child and what they brought to the table and how they interpreted each lesson plan.”

From babysitting to her teacher training experience, Lipari-Althaus has always enjoyed working with children and known it was a good fit for her professionally. However, finding the right kind of educational setting for her philosophy and educational approach has taken some time.

“When I first started teaching, I was teaching first grade in a public school. It was a great school but I felt limited by the standards and expectations put on the school from the outside,” she says. “I don’t believe that every school has to be the same. Different groups of students have different ways of education that serve them best.”

Lipari-Althaus’s work in Troy employed the Reggio approach and better reflected her own pedagogical framework. Developed in the 1940s in Italy, the educational philosophy values having children be active participants in their own learning, seeing education as a collaboration between parents, children and teachers and creating an environment that encourages hands-on learning, according to Education.com.

Although Antioch School does not specifically use the Reggio method, the values are similar in many ways.

“Antioch is a very unique school and the philosophy is very much about having the children involved in making choices about the curriculum,” says Powell. “There’s an emphasis on problem solving and having students make their own goals and then feeling accomplishment when they achieve them”

Additionally, parents are very involved in the school and four out of the five teachers serve on the board, giving them more of a voice in the school’s policies and processes.

All of these aspects create an environment Lipari-Althaus is excited to work in and have made her transition to the school very natural.

“I like the freedom here,” she says. “I think there are a lot of wonderful things that come from children having the safe space to have many different experiences and be imaginative. I enjoy taking on projects with children that integrate all aspects of a subject and having the projects evolve to include all kind of thinking,” much of it determined by the students’ own interests and questions.

Currently, much of the students — and consequently Lipari-Althaus’s — focus is on getting to know each other and establishing a classroom culture. With nearly half the students new to the class, the first few weeks are being dedicated to learning about each others’ families, sharing aspects of their daily lives and becoming comfortable in the classroom. In this last respect, Lipari-Althaus has been particularly impressed with the kindness of the older students in her group.

“The second and third graders have been very kind [to the new and younger students]. They’ve been giving little tours and are setting a great example,” she says, and the older students have successfully transmitted the message that, “This is a safe place: People can help you if you need it, but we believe that you can do it.”

Much of what will happen the rest of the year remains to be determined, as Lipari-Althaus watches, learns what her students are interested in and designs projects and experiences around those interests.

“Children have a right to shape what they’re going to learn and be supported in that,” she says. “If you are listening to children, they’ll show you what they’re working out and thinking about.”

Powell agrees and it was this approach that convinced the committee that Lipari-Althaus was right for the job.

“You can have years of educational experience and the degrees,” says Powell. “But some people just have an innate sense of respect and appreciation of children. They ask: what direction is this child going in? How can I help this child fully encompass what’s involved in this idea? Christine has that.”