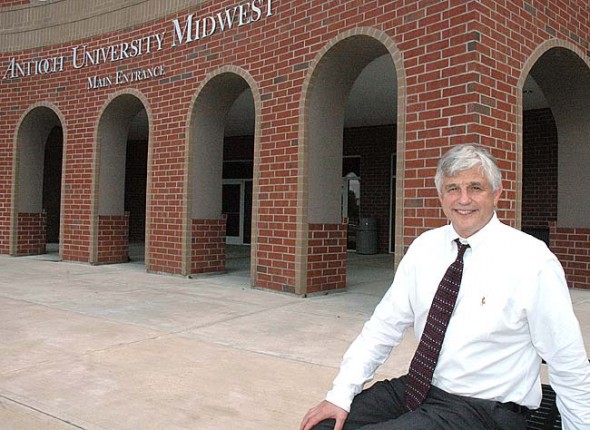 Howard Coleman of Seattle is the new president of Antioch University’s Board of Governors, replacing Art Zuckerman. (Photo by Diane Chiddister)

It’s been a good summer for Antioch University, which has recently received national recognition for fiscal stability along with an opportunity to take a leadership role in a national conference on educational innovation, funded by the Bill and Melinda Gates Foundation.

“It’s exciting to be acknowledged by a national foundation as a leader in this field,” AU Chancellor Felice Nudelman said in a recent interview.

The conference, the Breakthrough Models Academy, took place in July in Cambridge, Mass. According to the event’s Web site, the event was for, “higher education professionals who seek to catalyze change through the use of information technologies and innovative new approaches.”

AU has been an early adaptor of MOOCS, or massive open online courses. It was the first university in the country to offer college credit for MOOCs, after signing a contract with Coursera, a company that offers courses taught by professors in top universities. Since January 2013 AU Los Angeles has offered two courses taught by University of Pennsylvania professors, one on modern poetry and the other on Greek and Roman mythology. The courses are being offered with the goal of both broadening curriculum and offering high quality teaching at low cost, Nudelman said.

The July event was sponsored by Educause, funded by the Gates Foundation, and AU was invited to take part as a “coach” to “help develop the next cohort,” Nudelman said. “It’s really big to be invited into such a group.”

The recognition for fiscal health came in July, when the Chronicle of Higher Education published results of the U.S. Department of Education’s annual “financial responsibility” test for 2011. Antioch University received a perfect score of 3.0 on the test.

The university is also seeing a turnover in leadership, as this summer AU Board of Governors Vice President Howard Coleman took over as that body’s president, replacing Art Zuckerman, who presided over the board’s closing of Antioch College. Nudelman took over the chancellor job just a year ago, replacing Toni Murdock.

A 1975 Antioch College graduate, Coleman sees himself as an advocate for the values of social justice and environmental sustainability held by both the college and the university.

“It’s a kind of a new beginning” for the university, Coleman said in a recent interview, regarding the change of leadership.

“At the point the college was closed, this institution was in trouble,” she said. “You don’t make a decision like that unless you have no choice.”

The Department of Education fiscal responsibility test is based on a variety of criteria, including university audits, net worth, and the relationship between the university’s assets and liabilities, according to Nudelman. All 1,920 institutions of higher education that received federal financial aid in 2011 were evaluated, and 153 flunked the test for that year.

According to Nudelman, in the most recent fiscal year the university brought in $70 million in net revenue, and now has more than $22 million in reserves, along with a $7 million endowment.
“We’re doing better than we have for years,” Nudelman said.

However, she declined to give specific figures for the university’s financial situation.
While letting go of the college helped the university find fiscal stability, AU also benefitted from several AU campuses that recently enjoyed growth, according to Nudelman, who cited AU Seattle and AU Los Angeles as particularly successful. AU Los Angeles has grown so much that it recently built new facilities.

Things are also beginning to look up for AU Midwest, which according to Nudelman is starting to emerge from several years of financial turmoil.

The school’s fiscal problems were linked to declining enrollment due to the school’s focus on teacher training as its curricular centerpiece, Nudelman said. While that focus worked well during years when state funding for education was robust, it hurt the university in recent years, after Ohio cut funding for schools. After former Midwest President Michael Fishbein was put on special assignment in winter 2012, Ellen Hall was brought in to lead the struggling institution.

As Midwest struggled with enrollment decline, leaders completed a market analysis to track Miami Valley market trends and workforce data, in order to meet local needs, according to Nudelman.
“We asked ourselves, ‘what does this region really need?” she said. “If we’re the steward of a place, we need to know that.”

And since spring 2013, student enrollment figures have begun looking up, Nudelman said, stating that the school met its budget needs in spring and summer 2013.

“Spring was the point when we first saw stability, and this summer we saw the trend continue,” she said.

However, Nudelman declined to give enrollment numbers.

AU Midwest seems to be finding its way out of financial turmoil, she said.

“It’s a story the community should be proud of,” Nudelman said. “Given the state’s lack of focus on education, Midwest still saw stability.”

New leaders
Recently, the News interviewed new AU Board President Coleman when he visited Yellow Springs for the AU Ph.D. program in Leadership and Change graduation.

What most excites Coleman about Antioch University is its commitment to help students who are traditionally shut out of higher education, he said. That commitment can be seen at the graduation ceremonies at various AU campuses, he said, where many students are the first in their families to go to college.

“The university has an enormous commitment to provide a broad access to higher education,” he said.
According to Nudelman, AU has used a variety of strategies to help minority students and others gain access to a college education. For instance, on each of its five campuses, AU has reached out to local community colleges to develop ongoing relationships, and to ease the path of those seeking to go on to a four-year university. In the Miami Valley, AU launched a partnership with Clark State University to allow its students ease in furthering their education at AU, and is collaborating with Greene-Soin to allow its employees access to classes.

“It’s a social justice issue,” she said, of broadening access to higher education. “We have a responsibility.”

Along with the university’s commitment to welcoming nontraditional students, Coleman appreciates its commitment to environmental sustainability. These values are ones held in common with Antioch College, and he would like to see the university and college collaborate in the future.

Coleman, an attorney, joined the board seven years ago, after volunteering to head the university’s investment committee. Under his leadership, the university has seen a fiscal turnaround.

He also brings to the university a commitment to “trying to be inclusive, communicative and collaborative.”