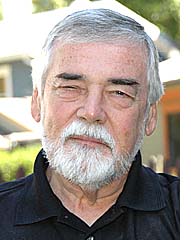 While it’s not yet official, former Village Manager Kent Bristol will likely soon be the Village’s interim manager. He will take over from Manager Laura Curliss, who is leaving the position Sept. 28.
Village Council made the announcement that Bristol is up for the interim job at its Sept. 3 meeting.
“Council has been in discussions with Kent Bristol and we’re happy with the discussions,” Council member Gerry Simms said at the meeting.

Following the meeting, Council members Karen Wintrow and Lori Askeland both stated that they believe Bristol will be a good fit for the job, due to his knowledge of the village and of the manager’s position.

“In a week or two we went from a state of uncertainty to feeling relaxed,” Wintrow said. “I think he’ll be perfect for the interim position.”

Council hopes to move ahead soon, so that Bristol can overlap with Curliss before she leaves. Curliss, who has been on the job a little more than a year, reached a severance agreement with Council that was announced at Council’s Aug. 19 meeting.

This week’s Council meeting was Curliss’ last, and she thanked Council along with villagers who offered support in recent weeks.

“It’s been a pleasure to serve you,” she said.

On Wednesday, Council President Judith Hempfling said that Council will likely move ahead at its Sept. 16 meeting to approve Bristol.

In an interview Wednesday, Bristol, 72, said he is interested in the interim job because, “I think I can do it.” Having left the job 19 years ago, Bristol acknowledged that he’s “not up to date” with current issues nor familiar with the current Village staff.

“But I do know the village, and I think my style is compatible with Council,” he said.

That style is one of not having his own agenda, he said, but rather viewing his job as the manager in a council-manager government as carrying out the wishes of Council, and of the community.
And after working in local government for 43 years, most often as a city manager, Bristol has some thoughts about what kind of managers work best in Yellow Springs. In his career, the managers Bristol has met are most often intelligent and capable, he said, but sometimes have a “humility deficit” and a take-charge attitude. That sort of manager hasn’t worked well in the village, he said.

“It takes someone who really likes us as a town and wants to be here, or someone who is willing to put their biases on hold and adapt,” he said.

“If Council is willing, I could help them with the selection process so we can find someone who will stay,” he said.

When he was manager, Bristol was especially proud of his relationship with the Village staff, who he initially found as smart and capable but lacking in confidence. With the help of a consultant, he worked to help empower the staff, and felt that the effort benefited both the staff and the village.

“I would like to help build that sort of climate again,” he said.

Bristol left his position in 1994 because, after 15 years, he began to feel “stale” on the job, something he’d observed in others who served as managers over long periods of time. He didn’t want to leave his job then, he said, but wanted a change, so he requested a three-month sabbatical doing something that would benefit both him and the village. But local leaders felt that amount of time was too long, so Bristol left to take a job in Elkhorn, Wisc. He stayed at that job only a year and a half, then returned to the area to live in Yellow Springs again, working 10 years as the director of the Miami Valley Communication Council before his retirement in 2005.

Bristol and his wife, Nancy Noonan, have lived in their Walnut Street home for many years, and Bristol has lived in town since 1979, with the exception of the year and a half in Wisconsin. He’s a big booster of Yellow Springs.

“It’s a special place,” he said of the village. “I love the people here, the political consciousness.”

Bristol anticipates that, if he gets the interim position, he’d be on the job from five to eight months, since that’s how long it takes to hire a new manager. Initially, he’ll spend his time familiarizing himself with the current staff and pressing issues, he said. And after that, he will be happy to return to his previous life.

See next week’s News for other items of Sept. 3 Council business.