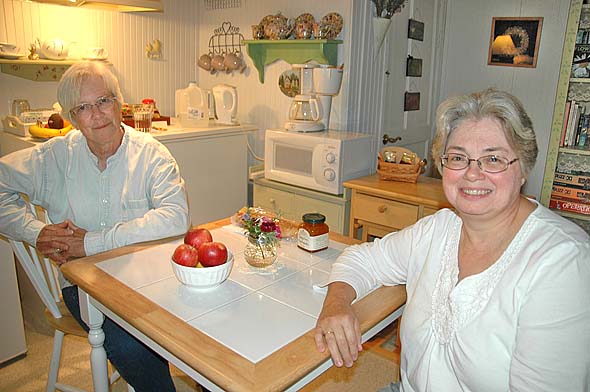 Sharon Benedict, left, and Lisa Quesne are selling their B&B, Herbs and Lace, after having spent several years remodeling the former abandoned cottage in Clifton. They are holding an open house at the business, 8 Clinton Street in Clifton, this Sunday, Sept. 22, from 2 to 4 p.m. (Photo by Diane Chiddister)

Clifton bed & breakfast up for sale

Twelve years ago, Sharon Benedict and Lisa Quesne came upon a deal they couldn’t resist — a home for sale in Clifton complete with an abandoned cottage in the backyard. The cottage, more than 100 years old, had been Johnson’s Feed and Grain in the 1890s, Mrs. Stiles’ cow barn in the 1930s and a home for Antioch College students in the 1960s and 70s. But it had sat empty since then, with no indoor plumbing or running water.

The two women were undeterred.

“We saw the potential,” Quesne said in a recent interview.

After several years of renovation, the couple opened the cottage as a gift shop, but in a few years the bottom fell out of that market when the recession hit. So in 2008, they repurposed the home as a bed and breakfast. Now they’re selling their successful B&B business, Herbs & Lace, along with the home they live in in front and extensive gardens in the backyard. The home and B&B will be open to the public this Sunday, Sept. 22, from 2–4 p.m. at 8 Clinton St. in Clifton (across from the Clifton Post Office). The realtor is Minerva Bieri of Sibcy Cline Realtors

Quesne and Benedict, who are selling their home and business because they want to downsize, are hoping that after all their hard work, someone comes along who wants to make use of the newly renovated cottage, although they know it may not remain a B&B (although all of the furnishings and decorative china will remain in the B&B if the buyer wants them).

Running a B&B in the tiny village of Clifton has been surprisingly rewarding, according to Benedict, who works full time at the Greene County Library in Xenia.

“It’s a delight,” she said. “You get to meet so many wonderful people from all over the world, and many become friends.”

The B&B guest who traveled furthest came from Korea, and others have visited from Spain and Scotland. Their B&B has been booked every weekend in 2013 but three, the women said, with most guests coming to visit family in the area, Cedarville University, or events in Yellow Springs.

“There’s so much going on in Yellow Springs,” Benedict said, stating that people come from Columbus or Cincinnati for the street fairs, yoga workshops, art events or to hike the Glen or the Gorge. Sometimes people come to Herbs & Lace because they can’t find a place to stay in Yellow Springs, and sometimes they come because they want the quiet peacefulness of Clifton, population 150.

Neither woman had experience renovating an old house before they took on the abandoned structure, but they pitched in to help the two men (“Sam and Fred”) who did the work. The effort involved first gutting the interior to change the eight small rooms into two large ones, replacing windows, and adding insulation along with indoor plumbing.

A native of England, Quesne had the vision for the B&B’s decor: china and lace are abundant in the quaint cottage, with teapots and decorative plates throughout. There’s an open room downstairs with a bed, living room area and tiny kitchen, and another bedroom and crafts area upstairs. The cottage can hold up to five people.

Along with running their business (Quesne is a social worker who works full time for the Greene County Council on Aging) the women are avid gardeners, and their backyard is a lush green space complete with apple and cherry trees, a greenhouse and an English herb garden. While they have no plans to give up gardening in their new home, they do seek a smaller space to pursue their love for growing things.

“The gardens have got away from us,” Quesne said of their large backyard.

They don’t yet have a new home, although have seen some possibilities in Xenia. They’d love to live in Yellow Springs, but couldn’t find anything they could afford, according to Benedict, who hopes to retire soon and return to her interest in painting (she has an MFA in fine arts).

But first they need to find new owners for both their home and their B&B, which has provided them years of not only income but pleasure. Quesne dreams of a young couple with a stay-at-home mom (or dad) who want a second income, but she’s open to whomever has an interest.

“Having brought it back from the dead, it feels when we leave we want to pass it on to someone who can give it a new life,” she said.

For more information, go online to ­herbsandlace.com, or contact Bieri at 430-0843.