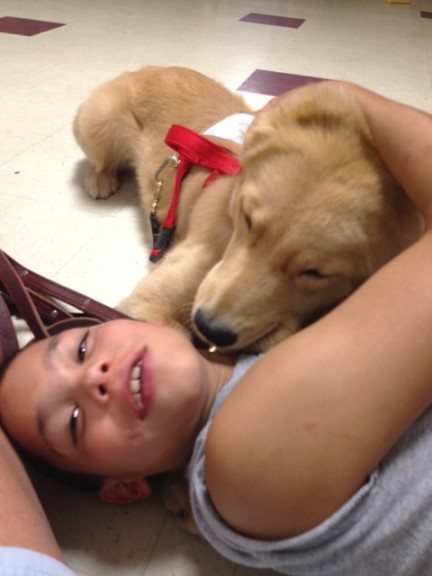 Jonah Kintner plays with Clank at home in the village.

Jonah Kintner, a Mills Lawn elementary student, has a service dog named Clank who helps him with everyday life skills. Jonah wants Clank to be able to come to school with him to help him feel calmer, safer, and better able to concentrate like his peers. But according to Jonah’s mom Judy Kintner last week, since the family first asked the school in June for permission to bring Clank to school, the district’s response has been negative. However, while Kintner didn’t receive support for her request at last Thursday’s school board meeting, the situation changed on Monday during a meeting between Kintner, Superintendent Mario Basora, Mills Lawn Principal Matt Housh, and Karen Shirk, the executive director of 4 Paws for Ability, a nonprofit agency that provides service dogs to disabled children.

“We have agreed to the parameters of an agreement and just need to put it in writing,” Kintner said on Monday. The agreement stipulates that Clank would begin accompanying Jonah to school next Monday, Sept. 23, for a trial period that will last until Christmas vacation, at which time the situation will be re-evaluated.

In an email Tuesday Board President Benji Maruyama wrote, “the board is glad to hear of the agreement between the superintendent and Judy. The board encouraged Mario to work toward an agreement.” He also stated that the issue is “not black and white.”

Last Thursday’s school board meeting followed a public demonstration of support for service animals in the school, and at the meeting Kintner explained to the board the reasons for her request. However, at the start of the meeting, Maruyama stated that the board would hear the request but would not respond, due to pending litigation regarding the matter. In addition, after the meeting, District Superintendent Mario Basora said that the district is also not advised to speak on matters involving student privacy issues.

According to Basora on Friday, the district’s attorney had advised board members not to speak to the topic due to Kintner having filed a due process request with the Ohio Department of Education, a process the school district considers similar to a lawsuit.

According to Kintner, when she first began pursuing the search for a service dog for Jonah, the district encouraged her to approach it through his Individualized Education Program, or IEP. Jonah has an array of disabilities that affect his speech, his concentration, his ability to read, write and calculate numbers, the way he senses the physical world around him, and the way he interacts with other people. He has attended Mills Lawn since kindergarten and has always received “excellent” support from the school’s very professional and dedicated IEP team. And the yoga balls, heavy vests, fidgets (small toys that provide tactile input for better concentration), and even human interaction with his teachers have helped him a great deal. But none of the interventions give him what a service dog does, Kintner said.

Clank is available to give Jonah the sensory feedback his brain needs 24 hours a day, she said. Jonah can pet and tangle with Clank, and Clank lets him know when he has gone too far — the dog is trained to do so without the judgment or anger that a peer or sometimes a frustrated adult might have. And the more time the two spend together, the stronger their bond, and the greater effect the feedback loop has on Jonah, Kintner said.

In addition, Jonah has a high level of anxiety, especially during daily transitions, such as on the way to and from school. Clank would be a constant that would bridge those changes and possibly make Jonah feel safer, calmer, Kintner said.

“I want him to have an interactive sensory diet — something that moves with him and gives him a greater amount of personal responsibility,” she said. “He’s almost 10 years old, and I want him to keep moving forward, identifying his needs and accessing support without further stigmatizing him…and it’s his ability to choose it.”

So when Jonah finally got his service dog last month, a few weeks before school began, according to Kintner, the district’s IEP team evaluated Jonah and deemed the dog unnecessary at school due to the adequacy of the IEP services he was already receiving. After many attempts to discuss the issue with school officials, Kintner filed a request for due process with the Ohio Department of Education. She said this week that if all parties sign the agreement to allow Clank in the school with Jonah, she will drop the request.

Kintner said that while she disagreed with the district on their original stance on the service dog, she believes his teachers and administrators were acting in what they perceived to be his best interests.

“I truly believe that his IEP team has never come to the table without putting his needs first,” she said this week.

Other school board business will be reported in next week’s News.