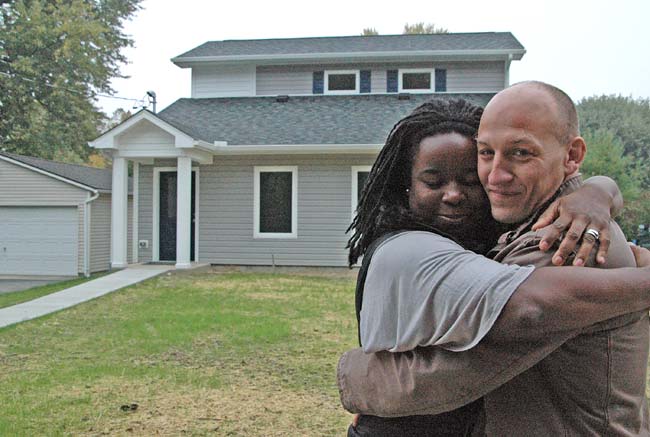 Brett and Isis Henderson will soon close on a house on West Davis Street built by local affordable housing group Home, Inc. The Hendersons hope to raise a family in the three-bedroom house, which was built to use about half the energy of a conventional home. (Photo by Megan Bachman)

When Brett and Isis Henderson moved to Yellow Springs from Los Angeles three years ago, they fell in love with the community, but not its expensive housing market. After a career in the film industry, Isis, 37, was going to nursing school, while Brett, 38, was starting out in the emerging solar energy field. With their modest income, the only homes they could find were in poor shape. Beavercreek beckoned while they temporarily rented here.

The Hendersons are now ecstatic to be closing on a new three-bedroom, two-bath energy-efficient home on West Davis Street for just $114,500. The 1,255-square foot two-story is projected to use less than half the energy of a conventional house. Not only does it fit the Hendersons’ goals for sustainable living at a price they can afford, it will give them the space to begin a family here.

Local affordable housing developer Home, Inc. was behind the project, once again keeping the final cost to home buyers low through a blend of private donations, in-kind labor, sweat equity and a land trust ownership model that gives homeowners a more modest return-on-investment. It is the 17th permanently affordable house Home Inc. has built in the community since 2001.

The Hendersons are thrilled with the energy-efficiency features — Brett is a solar project developer at Miamisburg Solar Power and Light — and are also more than happy to upgrade from their small rental on Elm Street and to stay in a community they have grown to love.

“I enjoy how personal and warm everyone is,” Isis said of Yellow Springs. “You don’t feel like a number like in a huge city and you can be yourself here.”

But the Hendersons are not the only ones making out with a great deal. According to Home, Inc. Executive Director Emily Seibel, the entire local community benefits when Home, Inc. sells another house. That’s because the community land trust continues to work with its clients to prevent foreclosure and default and helps stabilize the community by keeping homes affordable for lower-income residents.

“We’re developing a community asset held in perpetuity while helping people move up from renting, earn equity and stay in the community for a little longer,” Seibel said. “We’re developing this housing stock not part of the speculative housing market.”

For the Henderson’s to afford their new home, Home, Inc. calculated that it needed to fundraise $60,000, about one-third of its total development costs. All money was raised from private sources — no public money or tax dollars were used to subsidize this project — Seibel emphasized. Funding came from 11 sources inside and outside the community, including Yellow Springs Community Foundation, Huntington National Bank, the Federal Home Loan Bank of Cincinnati, Antioch University Midwest, Bike and Build Inc., the national Housing Assistance Council, Morgan Family Foundation, Ohio Community Development Finance Fund, Vectren Foundation, Wells Fargo Foundation and YSI Incorporated (a Xylem Brand).

Seibel is most proud of the projected energy savings of the new home. It received an Energy Star Certification and Home Energy Rating System (HERS) score of 57 for its air tightness, how well its insulation works and the efficiency of its appliances. According to the U.S. Department of Energy, a typical resale home scores 130 on the HERS index while a standard new home is rated at 100. A net-zero energy home would have a score of 0. The Hendersons plan to add a five-kilowatt solar photovoltaic array to their roof, which should cover all their electric needs.

The energy-efficiency features, which include passive solar design, 4×6-foot smart framing, high-efficiency windows, air tight construction, a heat recovery ventilator, the reduction of thermal bridging and an additional layer of rigid board insulation around and under the house, added about $5,000 onto the cost of the home, but will save its residents much more in utility bills. The projected cost savings to heat and cool the home is $900 per year, according to Seibel.

Both the Columbus-based architect and Beavercreek-based builder were passionate about energy efficiency. Architect Meera Parthasarathy said the passive solar design, in which the house is oriented to maximize solar gain in the winter, was an inexpensive but significant factor in the home’s ultimate energy savings. Another was its relatively small size, Parthasarathy said. The average new home in America is more than twice as big, at 2,505 square feet.

“I believe that less is more in the sense that you don’t need a lot more space than what you absolutely need,” Parthasarathy said. “I try to see how I can maximize the square footage to their needs so it provides two benefits — less volume to heat and cool and a lower budget.”

Builder Gary Heeb said that energy efficiency doesn’t always have to cost much more up front. In the project he used value engineering to shave materials costs and chose less expensive brands of insulation and windows that had the same performance. Heeb praised Home, Inc. for understanding that home energy costs are important to keeping homes affordable.

“I applaud Home, Inc. for their vision to see this,” Heeb said. “They want to make it energy-efficient and sustainable for the buyers to live in for over 30 years.”

The Home, Inc. house next door on West Davis Street, a four-bedroom 1,377-square foot ranch that Parthasarathy designed for the Campbell family, was also built to be energy efficient (it uses 46 percent of the energy of a conventional home) but doesn’t go as far as the Hendersons’ home. Still, the Campbell home’s green features are already paying off.

“I for sure see a difference in my gas cost,” Carrie Campbell wrote in an email this week. “I have not yet had a bill over $50/month. We have not had to turn our heat up past 68 degrees. The Village utility bill is somewhat lower as well.”

Parthasarathy is now adapting the designs of the West Davis Street homes to be used at Home, Inc.’s next development of four houses on Cemetery Street on Village-owned land. Home, Inc. has already raised nearly $120,000 for that project, with a goal to raise at least twice that much. Another property at the corner of Dayton and King streets will soon be ready for construction after a home there was demolished with funding through the Ohio Attorney General’s Office. About 40 families are currently on Home, Inc’s waiting list.

Seibel plans to make energy efficiency a focus of all of Home, Inc.’s future projects.

“It just makes so much sense for a community land trust interested in affordable housing for perpetuity to be pushing the envelope in energy-efficiency features,” Seibel said. “[Energy-efficiency] represents a community value, and we are of, and by, Yellow Springs.”