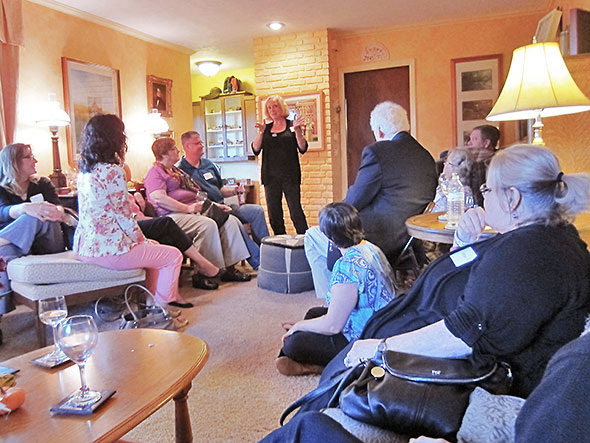 BLOG-A Witness to Conflict and Grace 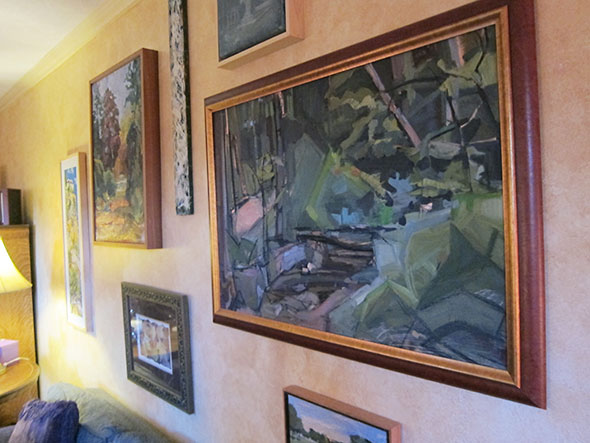 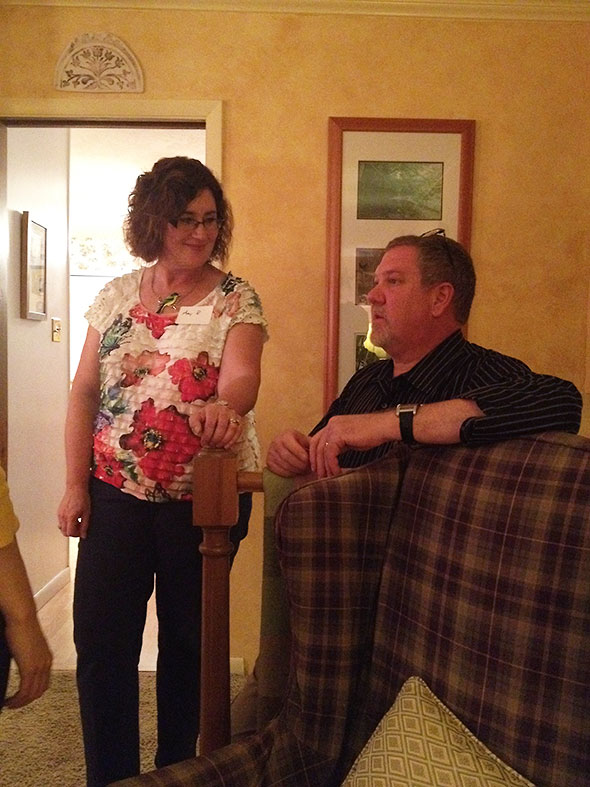 The event was hosted by Amy and Ron Rollins in their home—itself a showcase to local paintings and sculpture. A board member of the writers’ workshop, Ron Rollins is the assistant editor of the Dayton Daily News and a painter of abstract expressionism. In his role as a painter, he has participated in Artist Connection—a series of inspirational exchanges among artists assembled at the 48 High Street Gallery of the Dayton Society of Painters and Sculptors. As we settled into the living room, Ron Rollins voiced his family’s thrill at hosting a similar gathering. Here, instead of visual artists, our intimate group of twenty was composed of local writers. We came to talk of fiction.

The room where we congregated is a long gallery in both shape and function. Walls with the texture and color of an ancient museum hold a whirling arrangement of paintings and cloistered nooks of small sculpted pieces. Set off on the north wall is a stain glass of a Madonna seen as if through a small window…her eyes downcast, mournful, and sad. On the south wall is a series of wax reliefs produced by The Art Wax Werx of Cincinati. These pieces—about the size the palm of my hand but bigger—were molded from casts of architectural bosses. Originally the ornamental center of a cross, they depict biblical stories, brutal historical scenes, and natural beauty carved into multiple interlocking layers. 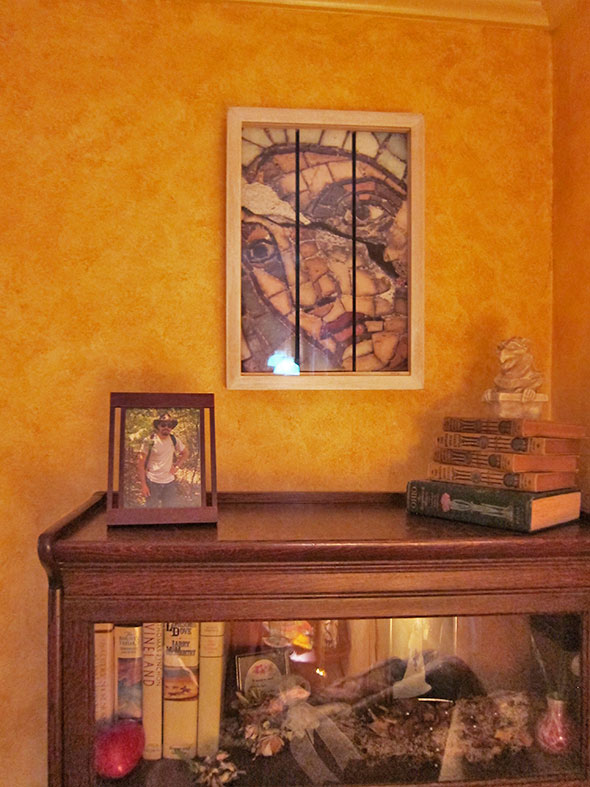 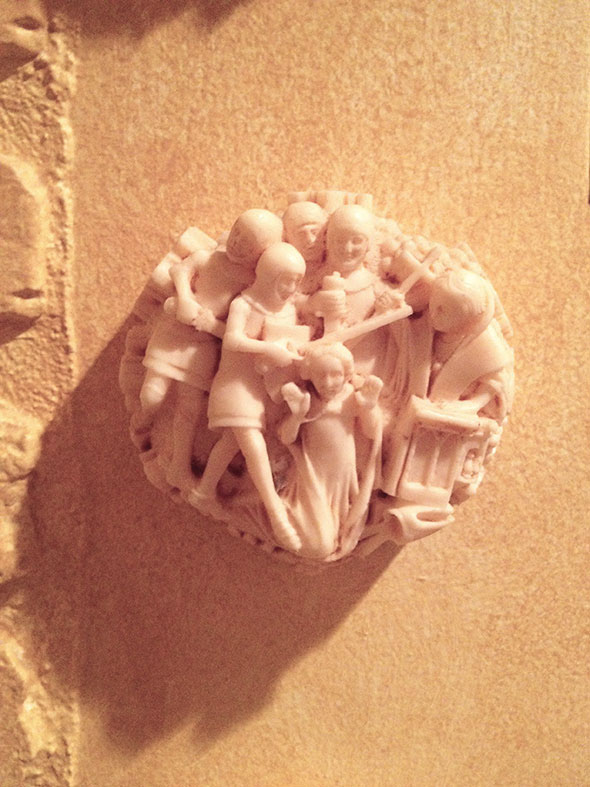 After allowing us time to take in the scene and a glass of wine from the kitchen, Sharon Short—the director of Antioch Writers’ Workshop—introduced our hosts and guest speaker New York Times’ best-selling author Martha Moody. Ron Rollins welcomed us to his home and described the event’s background. Listening to him as he pointed out the paintings of others and his own on the walls surrounding us, I had a vision of Mr Rollins when he recommended the DSPS’s Artist Connection model to the writers’ workshop board. In this vision, I distinctly hear the response, “Great idea, Ron. You host first!” I don’t think he’ll regret putting himself forward as the event was received well by a rapt and appreciative audience. 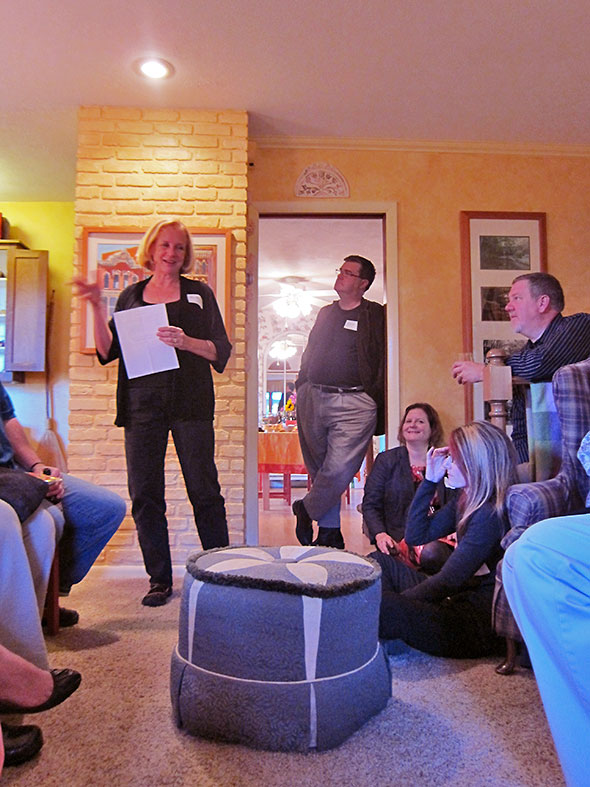 After Sharon Short’s introduction…it’s tempting to say “Short” introduction but she gave Ms Moody her due…our guest speaker took command. Martha Moody gave a captivating account of her milestone experiences as physician and traveler abroad. She credited those experiences as the underlying basis that gives the depth and resonance to her writing. Her account told of the many circumstances in which she learned to listen, resolve, and assure with clarity and enfolding confidence. Guiding people in the grips of uncompromising circumstances made her full witness to formidable displays of poise and resilience often from unforeseen quarters. First as a physician and then later as a fiction writer, sharp observation proved her great strength.

Taking questions from her audience, Ms Moody told us of her work method. Slow steady writing—four hundred words a day—accomplishes the work in manageable bits. The daily recording sessions keep her vigilant retuning her focus to the interesting turns of life. She recalled her inspiration for the 2011 novel Sharp and Dangerous Virtues. The idea for the dystopian novel—completed many years before the recent wave of zombies—formed as she watched Ohio farmers sheathed in metal gadgetry toiling in a desolate looking field. Half way through writing the book, she came to point in the plot where several characters would meet their untimely death. Not wanting to play favorites, she turned to the students of a class she was teaching and together they picked names out of a hat. All of the characters rescued from the hat survived the coming onslaught; the stories of those left in the hat came to a sudden, irrevocable end. 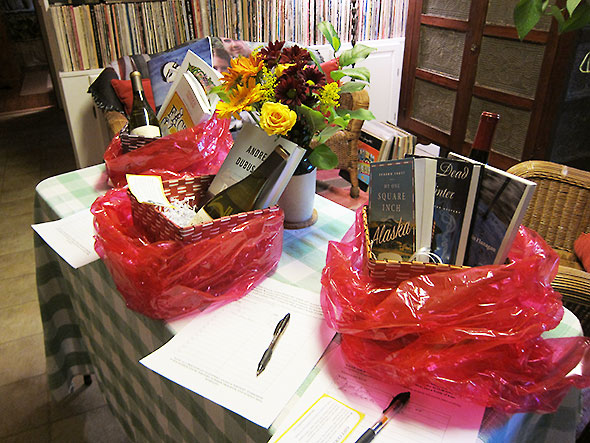 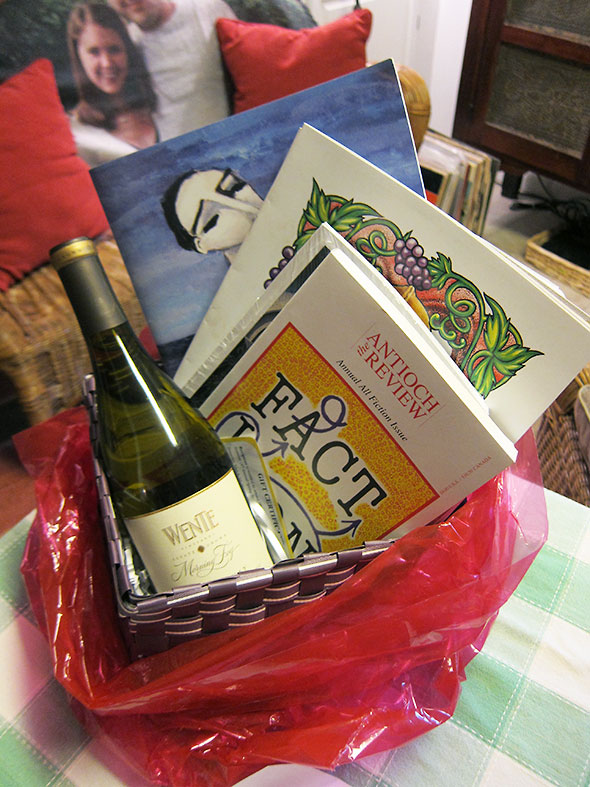 After her talk, we engaged in smaller groups reflecting on the elements stirred within and about the house. On a lower level, a silent auction was underway to raise funds for the Young Writers’ Scholarships that the workshop offers for its annual spring meeting. Baskets sweetened by bottles of wine featured a selection of local publications and local authors; the local public radio station WYSO donated a tote bag for auction containing a hoodie, musics CDs, and a thumb drive sporting the logo of news magazine This American Life. I placed a bid and returned upstairs. In the kitchen, open bottles of wine could be found alongside plates of well-prepared food: flat bread with homemade pesto, crackers with smoked salmon and cream, snappy raw vegetables, rounds of cheese, and fresh cut melon. I fixed a plate with samples and filled a glass with a deep red wine before returning to the group for a different kind of sustenance. 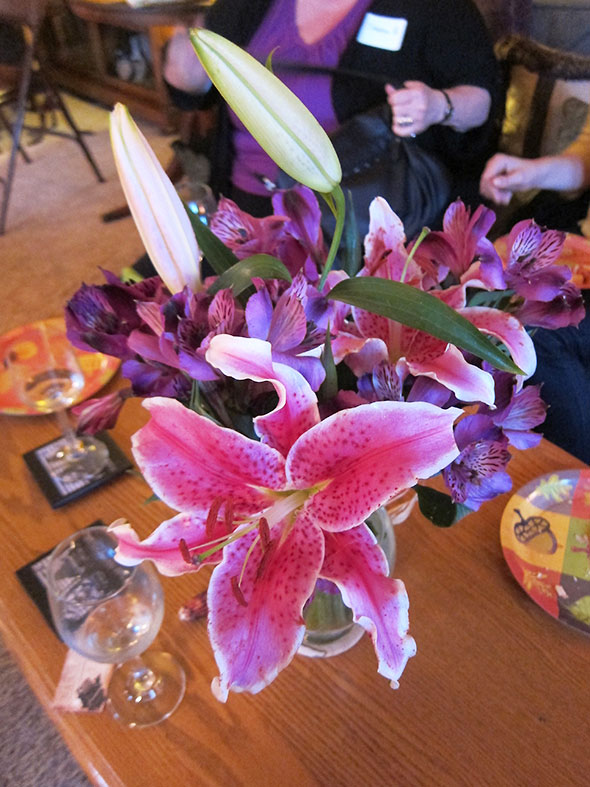 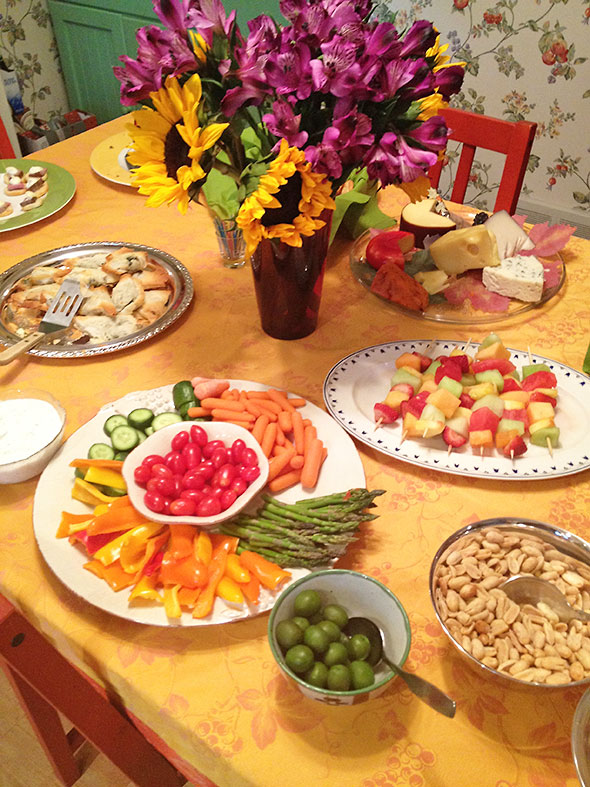 The Dayton Society of Painters and Sculptors have shared with the Writers’ Workshop a wonderful model of building connections among artists…here in an intimate setting. 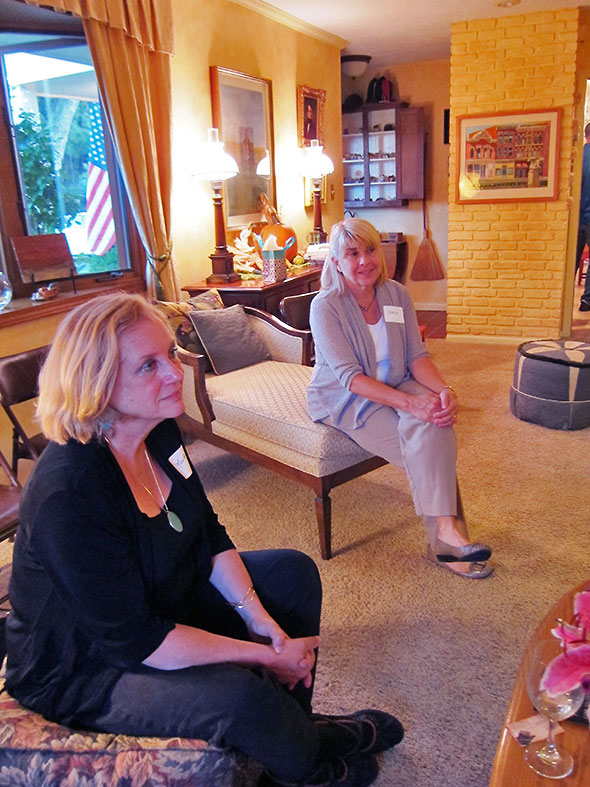 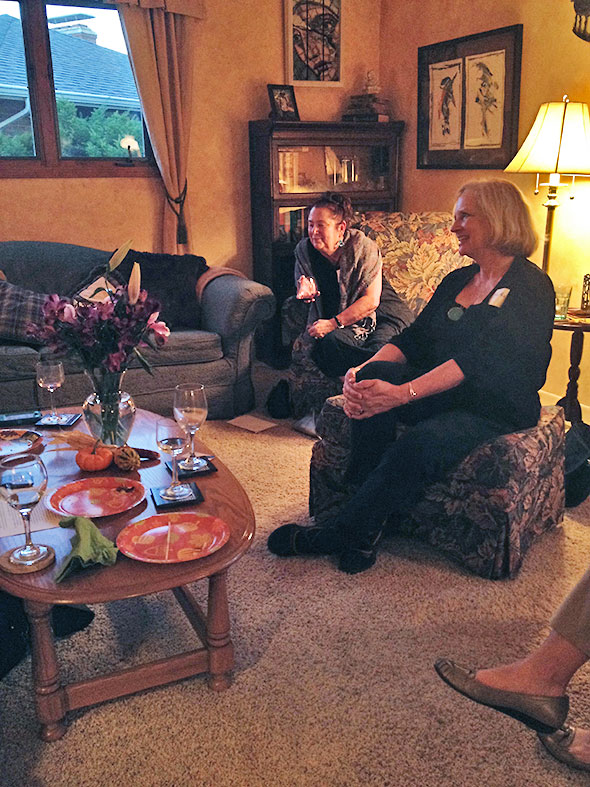 I returned to the living room and curled up near the feet of our guest speaker. Sitting next to a vibrant spray of lilies and alstroemeria, I soaked up the final minutes of the salon…listening with an apprentice ear to a room aromatized with the wise words of a generous master.