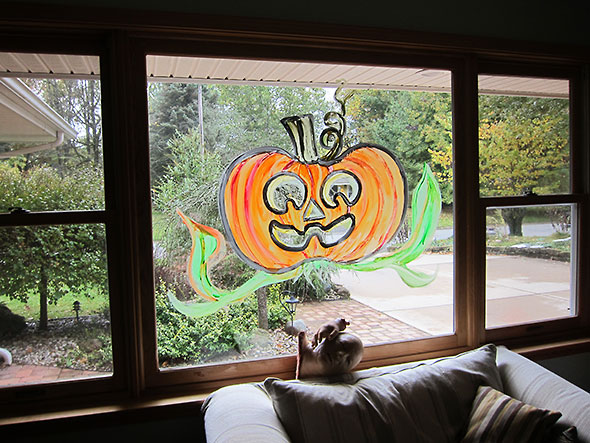 When I was young, the house that my parents owned had a big picture window. We’d look out that window in the autumn and witness the glory of the changing leaves on the rolling forested hills of the Susquehanna Valley. By the time I was 10, we had established an annual tradition of painting the window for the holidays. Originally the work of my parents, the children of the family soon demanded their part. We took over the window for Halloween and, in 1978, created a scary pumpkin with wicked yellow eyes and a malevolent grin. 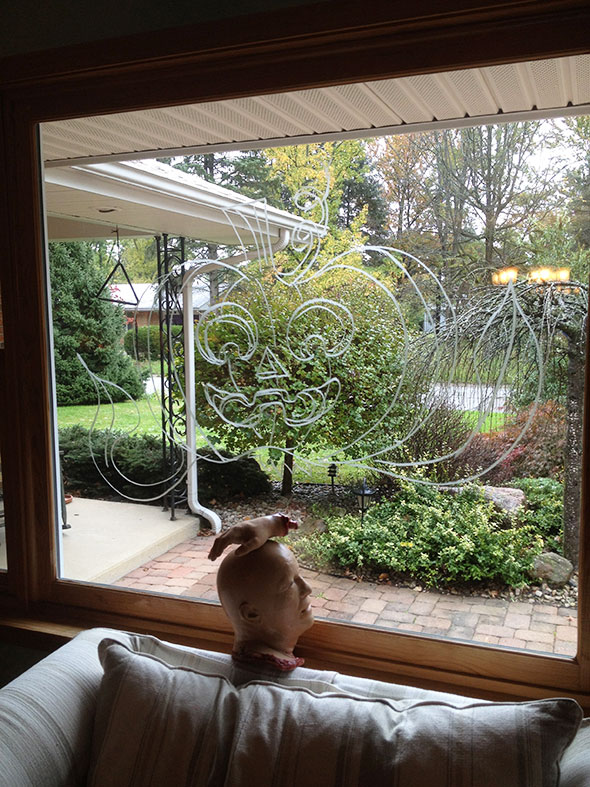 When my husband and I searched for a home in Yellow Springs, we had a short but exacting wish list: for me, a gas stove and a basement; for Jeremy, his and her sinks in the bathroom and a garage. In our house tours, our four month old daughter expressed her own decided preference: ceiling fans. By benevolent fate, we found a home that met our criteria precisely. Among the bonus features was the front window. it charmed me that it was so like the picture window I grew up gazing through.

I often thought about reinvigorating the childhood tradition and, early on, bought a set of acrylic paint, a metal palate, and two new paint brushes from the art supply store and town treasure Unfinished Creations, 243 Xenia Ave. For years, though, I failed to follow through and no seasonal mural materialized on the window’s wide clean surface. On a crisp autumn day this week, however, my little sister posted a picture of her as a nine year old posing with that 1978 pumpkin. I took her post as a friendly nudge. Having vague memories of the process, I sketched out a notional form and grabbed a sweet-scented soap bar from the guest bathroom. In the front window, I soaped out a sketch of a bulbous wide eyed character with a thick crowning stem and climbing vine. Filling the pane, I envisioned children coming up our driveway and their eyes growing big as they lock eyeballs with the jack-o-lantern. 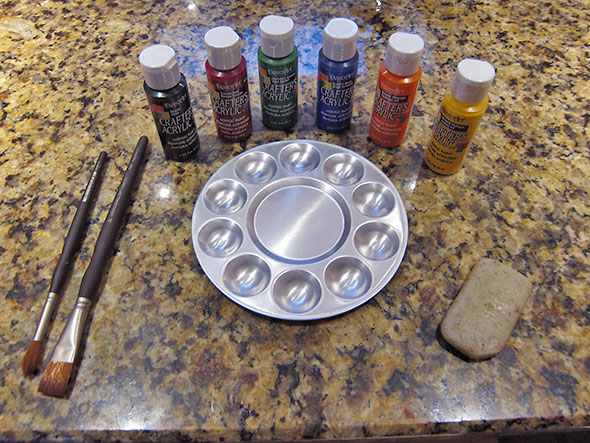 Next, I got out my colors. Black, red, green, blue, orange, and yellow. Perfect Halloween colors all. With the realization that I wouldn’t need to fuss mixing colors, I also felt this first attempt clicking neatly into place like destiny. 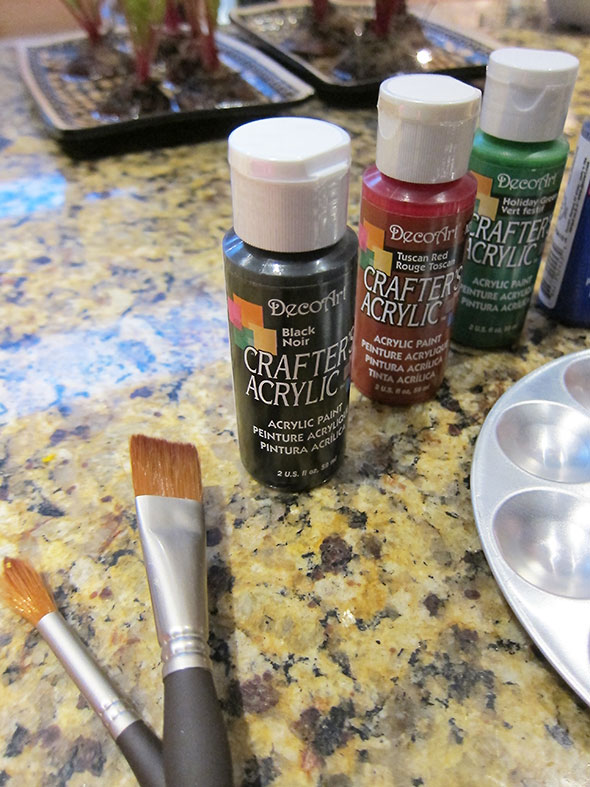 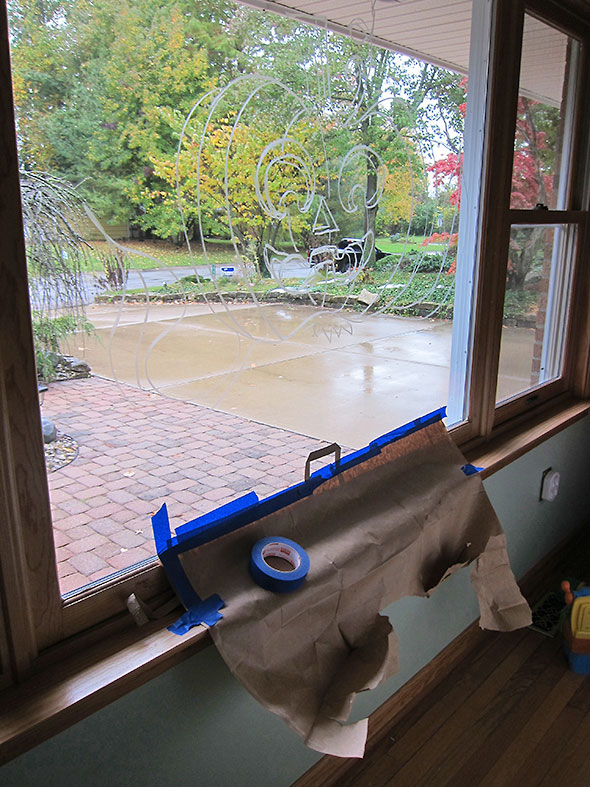 Now it was time to test my courage. The acrylic paint label read permanent. Remembering the ease of paint removal from glass—green slime was particularly helpful—I restrained a gulp and poured a puddle of black paint into the center round of the palate.

I picked up my paint brush. Then put it down directly. A vision of my husband’s horror at discovering paint splattered on the sill and floor had stormed in and demanded my immediate attention. A slashed opened paper bag and a reel of blue painters tape swept the vision into a far corner and, protection in place, I resumed with my work. 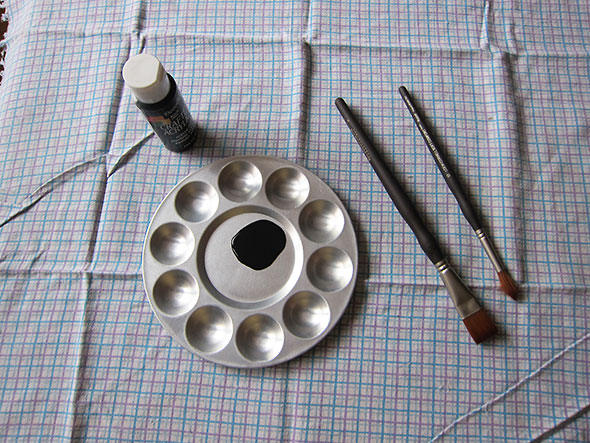 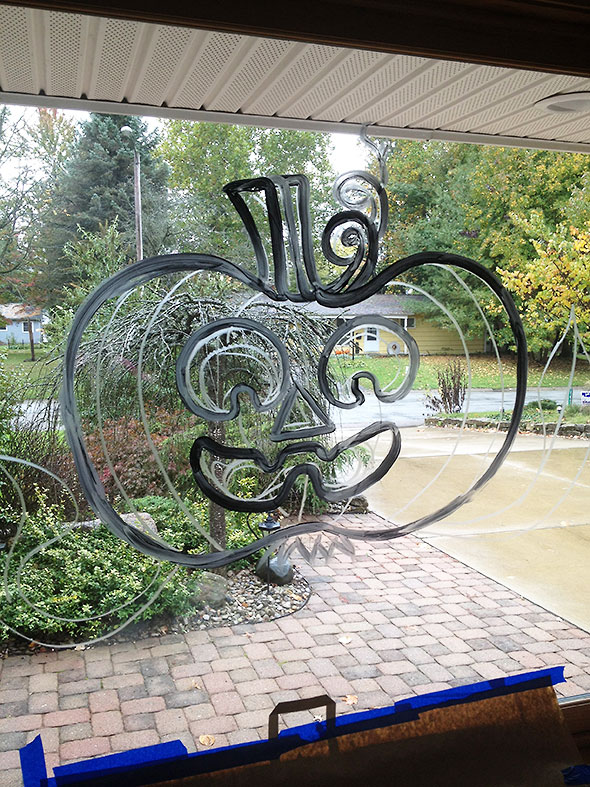 Using the smaller brush and a firm sweeping stroke, I followed the basic outline of the soap film. The eyes drew wide with surprise, the stem tall and corded. Using a lighter hand, I traced the seams of the pumpkin gourd with the last of the black pool of paint.

Outline complete, I paused to assess. As originally drawn, I realized the pumpkin looked toward the door instead of the driveway. Happily, I could fix this mistake in the next step. Pouring red, yellow, and a generous portion of orange, I filled in the pumpkin. I touched up the seams with thin lines of red, rimmed the eyes and mouth in yellow and a thin film of green, and then with the larger paintbrush painted the orange skin of the pumpkin in long downward strokes.

I quickly learned to avoid going over paint already laid down. The water based paint would essentially wash off if I attempted to paint over an existing coat. Fortunately, a single layer of color proved vibrant, and I worked quickly to blend the yellows, greens, and oranges of the vines and leaves before the paint dried. 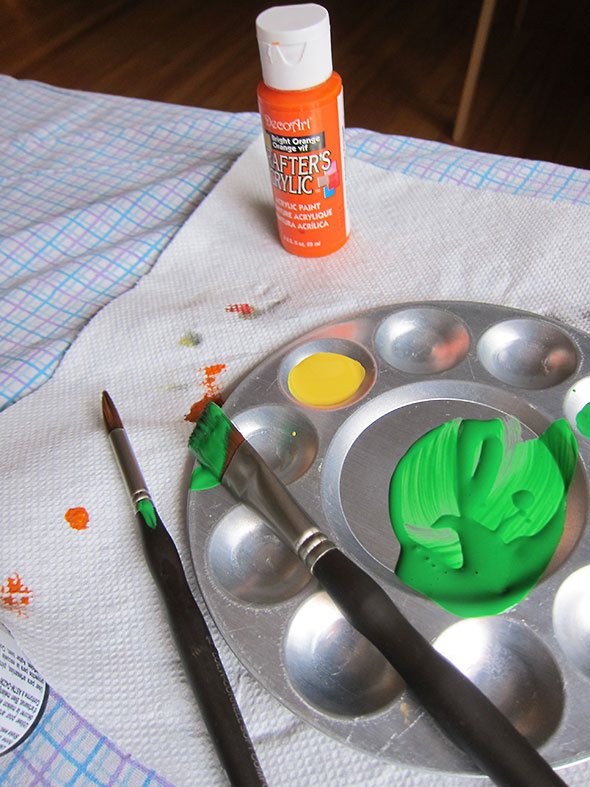 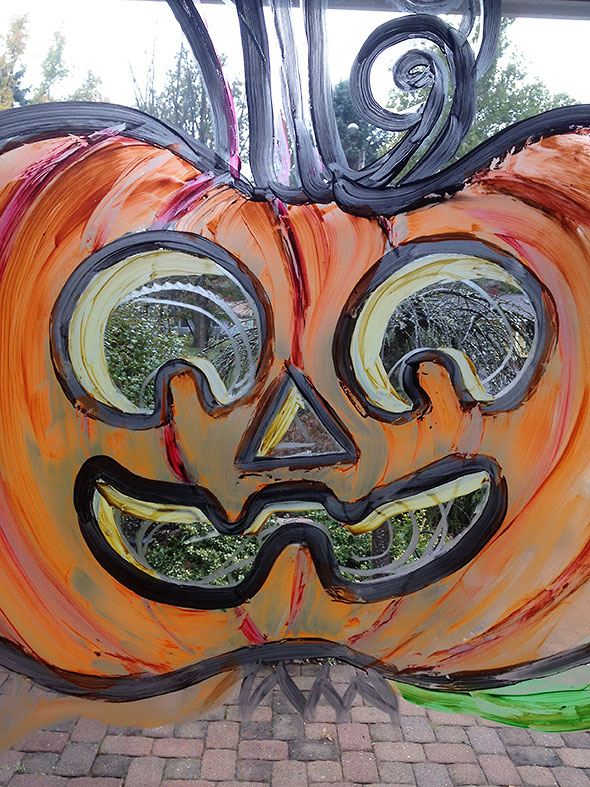 Standing back, I was frankly surprised at how well the mural turned out. Fighting to keep myself from fussing over it, I was closing up the paint tubes when a big orange school bus pulled up to the house to drop off my three year old son. His timing was perfect, his reaction precious. As we walked from the curb to the house, his eyes locked with our newcomer and his mouth dropped slightly in surprise. His eyes grew big and then twinkled. He chuckled, “That’s scary!” I took his comment—unsolicited and unaffected—as a great compliment. 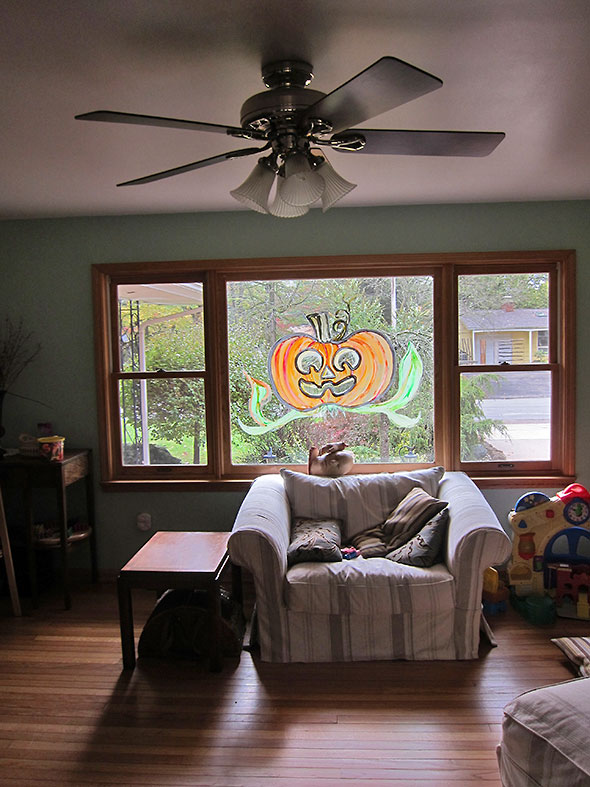 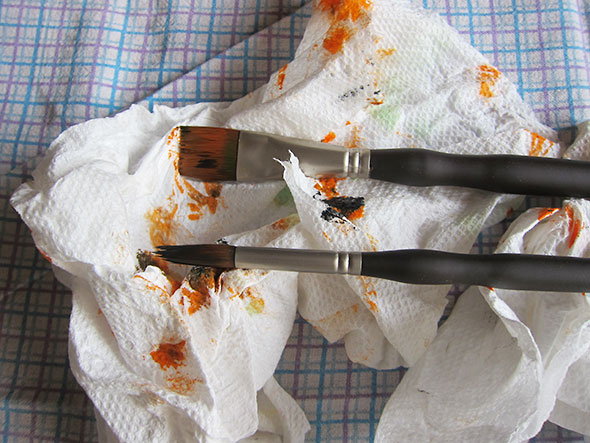 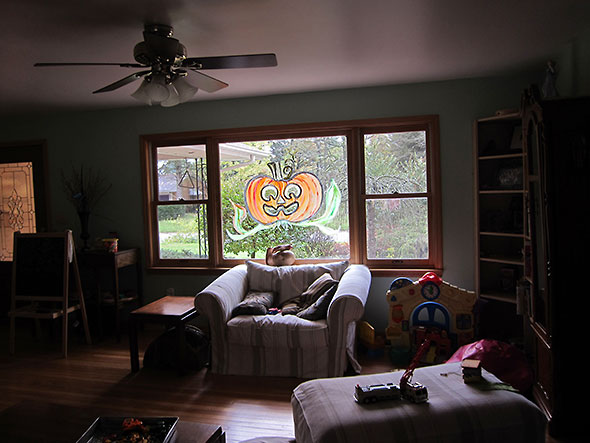 As I walked up the drive toward the mural myself, I felt we two were Linus Van Pelt, Charlie Brown’s good friend and confidant, and Sally Brown sharing that moment where, after many hours and even years of waiting, they see a figure rise from the pumpkin patch and shout out, “It’s the Great Pumpkin.” 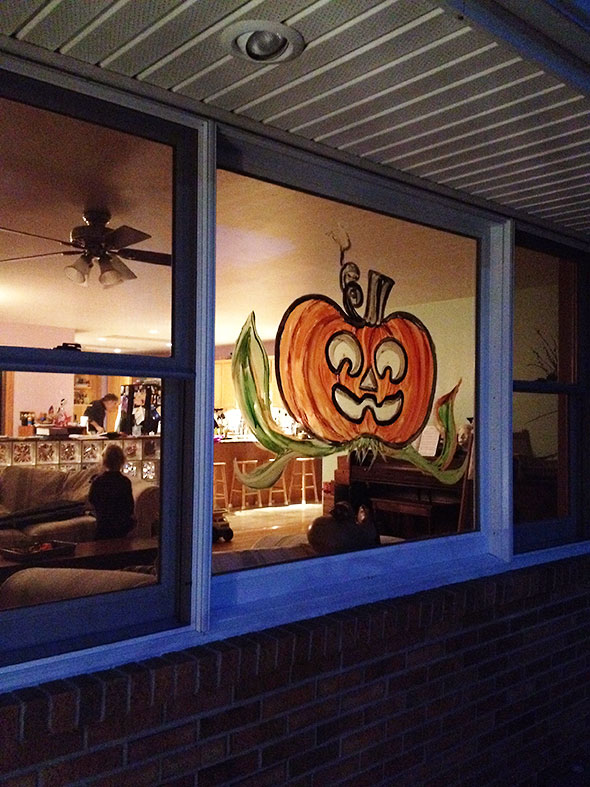 From spark-struck inspiration to whimsical instantiation, the mural went up quickly. Its muse was so strong and true that it felt like a great honor had been bestowed. “Here is sincerity as far as the eye can see.” Linus said as he surveyed his flourishing pumpkin patch. For me, I know the sincere pleasure of a vibrant childhood memory from the distant past to the direct fore.

Later that evening, my husband got the joy of seeing my daughter’s reaction. By his account, her reaction was much like mine as a young child; impressed as she was, she immediately recommended embellishments. “We should paint the eyes yellow, so that they glow!”

Knowing we had best leave well enough alone and not risk the current layers of paint, I did not remind her of the sparkly paint we purchased from Unfinished Creation this summer. Instead, I turned her on to a side project. The sliding doors opposite the picture window also offered a good working surface and one clear of cloth furniture. A ghost I suggested and she ran with the idea. 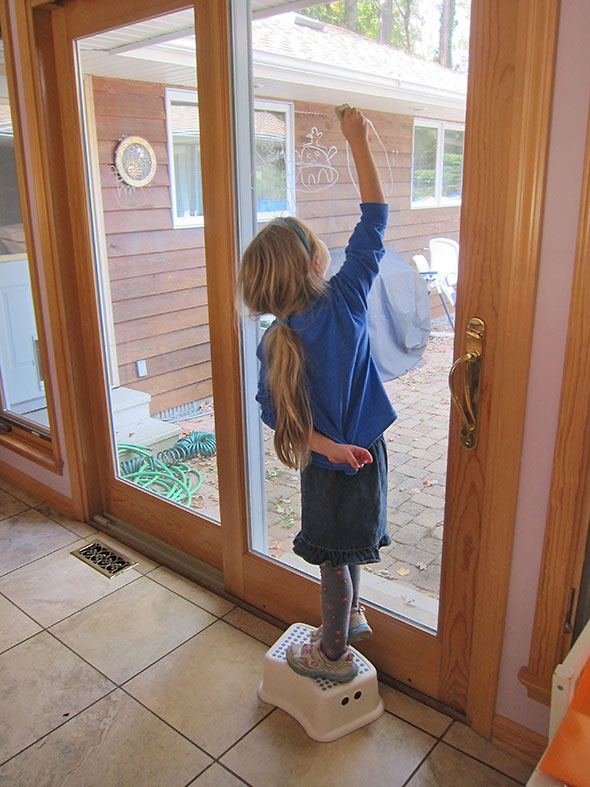 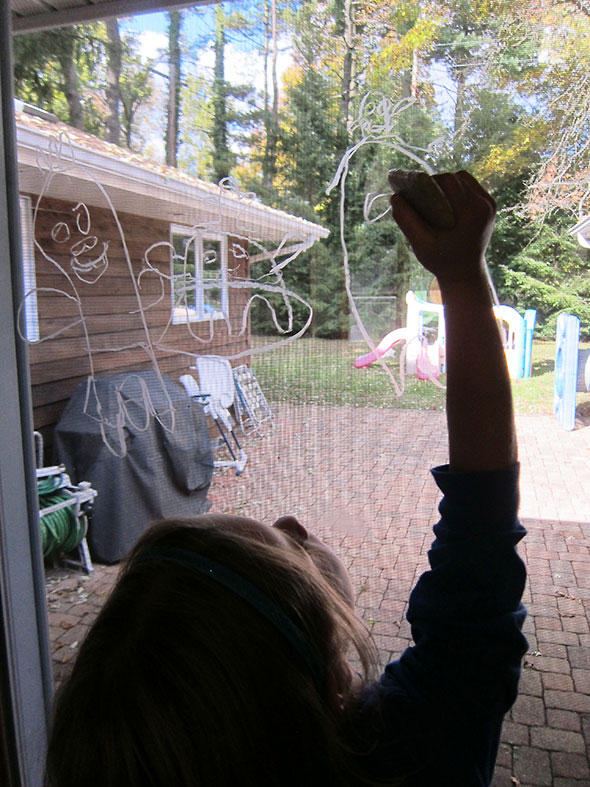 Soon a royal family of ghost embellished the doors. A family of six including two twin babies smiling in their matching cradles. The forms await our return to Unfinished Creations to acquire a batch of white paint…the one Halloween color I didn’t get. 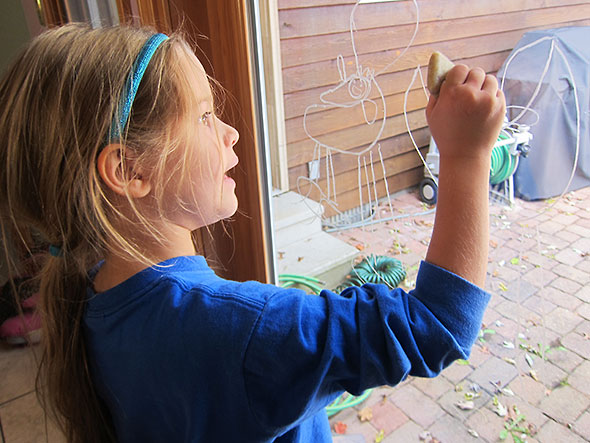 I never know what of my childhood treasures my children will hold dear. Here, I believe we both have rediscovered the joy of soaping windows and bringing a shadowy visage to glowing, eye-popping life.

2 Responses to “BLOG-It’s the Great Pumpkin”