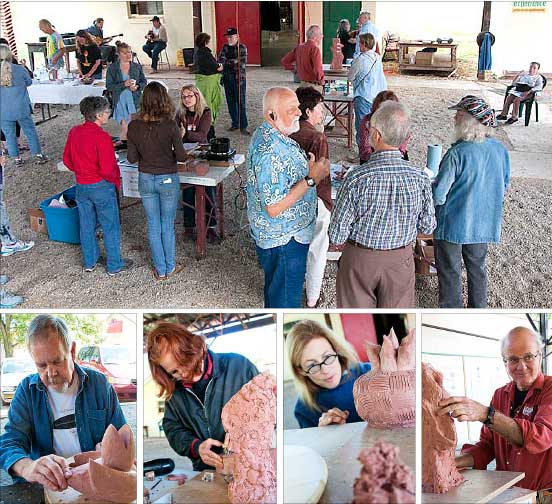 The village’s first National Bronze Sculpture Symposium, which has been taking place the past week and a half, concludes this Saturday evening at 7 p.m. with an outside bronze pour at the outdoor Antioch College foundry, adjacent to the Antioch Amphitheatre. Organizers say the symposium’s events have been well attended. Shown are, above, last week’s opening reception, and below, the four sculptors at work. From left are John Weidman of New Hampshire; D’jean Jawrunner of New Mexico: Susan Byrnes of Cincinnati; and Brian Maughn of Yellow Springs. (submitted photos by Dennie Eagleson)

The first National Bronze Sculpture Symposium will conclude in a dramatic glow Saturday night, as pieces created during the two-week event are finished in a bronze pour at sunset. The outdoor pour will take place at 7 p.m. at the Antioch College Outdoor Foundry, next to the amphitheater. The Yellow Springs Dance and Soul Fire Tribe will also perform, along with the Borenya Drummers.
The event promises to be memorable, according to symposium project manager Joanne Caputo.
“Seeing metal in its liquid form — it’s not something we usually see, especially bronze,” Caputo said.

What villagers will see is the molten metal aglow in a huge graphite crucible, which will be manipulated by several people in protective clothing. The molten metal will be poured into the empty spaces inside the ceramic shells of sculptures created during the symposium, spaces previously occupied by wax that will have melted away — hence the name of the method, “lost wax.” This ancient method for creating bronze sculptures, which first appeared in the third millenium B.C., hasn’t changed much since its birth several centuries ago, according to the Bronze Symposium web site, http://www.yellow-springs-experience.org/bronze-sculpture-symposium/.

To prepare the community for the bronze pour, Foundry Chief Bernie Carreno will present demonstrations of the process outdoors on Wednesday and Thursday evenings at 7:30 p.m. at the foundry space. Carreno will then move inside Friday evening to describe the lost wax process, as well as his own work, at 7:30 p.m. at 113 McGregor Hall at the college.

The events conclude a two-week symposium that seems to have captured the enthusiasm of the community, according to Caputo.

“There’s always some question about how people will respond the first year of an event, but we’re very pleased at the attendance of both day and evening events,” she said. “And we’re hearing a lot of buzz about the pour.”

Also impressed with community participation was Ohio artist Susan Byrnes, one of four sculptors invited to take part in the event. Villagers are invited to observe the sculptors at work in the foundry space during regular working hours through Friday, and many have already done so, according to Byrnes.

“People really care here,” Byrnes said. “People clearly care about the arts and the way they enrich the community. And there’s a real sense of community here, which is lovely to experience.”
The village of Yellow Springs was one reason that Byrnes, who lives in Cincinnati, applied to take part in the symposium, she said. And she was also attracted by an event in which the sculptors know where their finished pieces will be placed in the village. As soon as she discovered her work will end up in front of Mills Lawn School, Byrnes came to the village to talk with the school’s principal, Matt Housh. She wanted to find out the values and concerns of the children, Byrnes said, so she could create a sculpture that would be relevant to them.

“I like to make pieces that resonate with the community,” she said.

Discovering that the school is working to create an “inclusion” culture, and also that former kindergarten teacher Becky Brunsman taught all of her children to sing, “Red Red Robin,” Byrnes came up with the image of a nest of baby birds. During the symposium, she created three small sculptures modeled on the nests of robins, orioles and swallows, with the heads of baby birds poking out.

Byrnes said she hopes the nest image reflects the children’s sense of belonging.

“I’m hoping the students feel they’re a part of a larger community,” she said.

D’jean Jawrunner of New Mexico, another of the invited sculptors, was also drawn to the event’s unique aspects, including knowing the final location of her finished work, which has inspired her creative process.

“The call to artists was exciting,” she said.

Jawrunner’s pieces will be displayed on the brick wall outside the Spirited Goat Coffee House, and she has visited the spot repeatedly to get a sense of its character. She hopes her sculptures reflect some of the energy that she has found in the people there, she said.

“I saw people moving a lot, having a good time,” she said.

Jawrunner is also pleased that the finished sculptures will be easily accessible to the public, and she invites people to touch and interact with them. And she’s appreciative that, instead of being asked to create one larger piece, the artists create three small ones.

“Having three small ones is nice, because they’ll continue to speak to each other.”

The other two sculptors, John Weidman of New Hampshire and Brian Maughn of Yellow Springs, were also busy finishing their pieces this week. For Maughn, the requirement that the small sculptures be abstract was “freeing,” after years of commissioned representational work. Being a part of the event allowed him to return to his artistic roots, when he did focus on abstract images, he said.
And for Weidman, who hosts his own symposiums as the director of the Andres Institute of Art, the Yellow Springs symposium is a chance to be an artist again, rather than the host of an event.
“I was thrilled when they selected me,” he said. Weidman was also pleased to be able to reconnect with local sculptor Jon Hudson, who has been an invited artist at several Andres Institute symposiums.

As well as being pleased with the community support for the event, organizers are happy with the educational components of the Bronze Symposium, Caputo said. A grant from the Ohio Arts Council has allowed art students at Yellow Springs High School to do their own aluminum pour next week, and the sculptors have visited Mills Lawn and the Antioch School to work with students. On Wednesday, the artists visited Project Jericho in Springfield, a nonprofit that uses the arts in an intervention program for juveniles in the detention system.