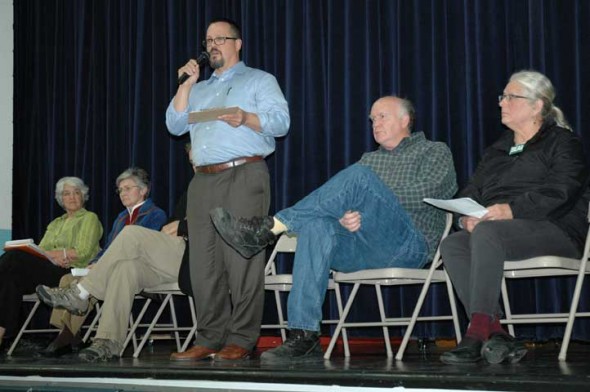 Evan Scott was one of six school board candidates who participated in the first of two election forums sponsored by the James A. McKee Group.

About 100 villagers filled the Mills Lawn gym Wednesday night for the first Candidate’s Night, sponsored by the James McKee Group. Six candidates for the Yellow Springs school board and seven for the Miami Township Trustees spoke about their reasons for seeking office and answered questions.

The second Candidate’s Night will take place tomorrow, Oct. 24, at 6:30 p.m., when candidates for Village Council will speak.

Several school board candidates emphasized what they considered the appropriate role of board members versus the role of the school administration. According to incumbent Aida Merhemic, the Yellow Springs district has a “great administrative team,” and the board’s role, besides fiscal oversight and holding the administrative team accountable, is to support the administrators, along with to “create an environment to keep them here and to grow the district.”

The board and administrators should work as a team, “and when they communicate effectively, a dynamic situation is created,” she said.

According to candidate Steven Conn, a professor of history at Ohio State, the role of the board is “to govern, not to manage.” The board should work with administrators to develop goals and objectives, and then “leave how they get implemented to the administrators.”

“The reason I’m running is that I’m excited about the direction the schools are heading,” he said, referring to the district’s new emphasis on project-based learning, or PBL, and its 2020 plan, an “ambitious, challenging set of goals we set for ourselves.” Conn was a member of the group that developed the plan..

The current board is spending too much time trying to manage and not enough time looking at the big picture, according to candidate Evan Scott, a strategic planning consultant. According to his analysis of board meeting discussions, the board spent about 40 percent of its time focusing on the district budget and little time on strategic planning.

Incumbent Angela Wright identified as the three main issues facing the board, “building a cohesive board, improving decision-making and community engagement.” School board members have the responsibility to ask questions, she said, and improved data collection is needed to make better decisions. Wright also emphasized the need for a collegial working relationship between the board and administrators.

“A positive team culture promotes a unity of purpose,” she said.

Candidate Allen Hunt, a professor of physics and geology at Wright State University, identified his interest in improving students’ readiness in math as his reason for running. At Wright State, entering freshmen tend to understand math on a 6th-grade level, he said, a deficit that makes much teaching difficult. Hunt says that he is excited about PBL’s ability to strengthen math education.

School board candidate Ara Beal was not able to attend the forum, but Kate Anderson read a statement in her place.

For a more detailed story and a report on the Miami Township trustees forum, see the Oct. 31 edition of the YS News. 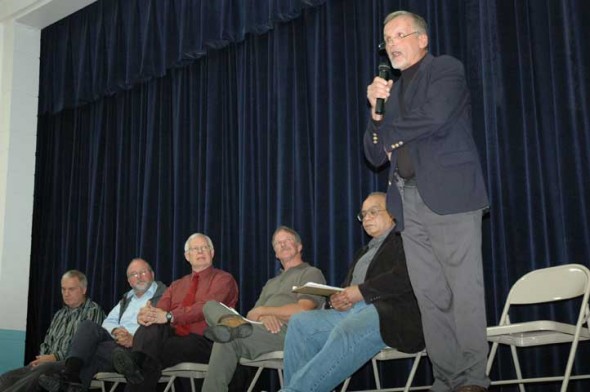 John Struewing spoke during the first part of the evening reserved for the Miami Township candidates.