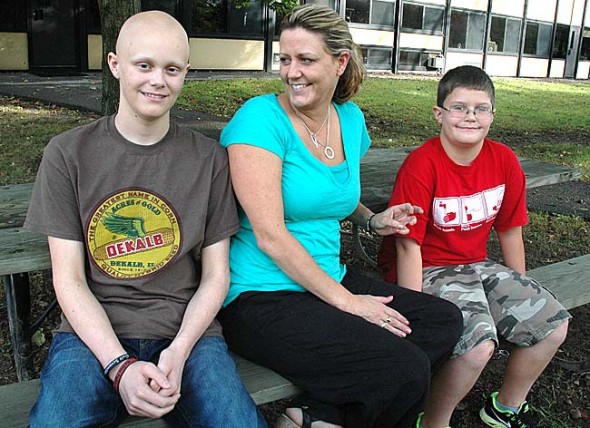 Chase Barclay, left, with his mother, Mills Lawn Elementary School fifth-grade teacher Dionne, and younger brother, Tucker. Chase, a 15-year-old Yellow Springs High School sophomore, was diagnosed with a rare form of lung cancer in April. Over the last six months the community has supported him and his family by fundraising, printing T-shirts and sending prayers. (Photo by Megan Bachman)

In the six months since her 15-year-old son, Chase, was diagnosed with a rare form of lung cancer, Dionne Barclay has felt the full range of emotions one would expect —panic, disbelief, misery, guilt. But as Chase, now a Yellow Springs High School sophomore, emerges from an intense summer of surgery and chemotherapy treatments with hopes of beating the disease, the emotion that Barclay now feels most strongly is gratitude.

The support from Yellow Springs community was unsolicited, constant and invaluable, according to Barclay, a fifth-grade teacher at Mills Lawn Elementary School in a recent interview. Local friends and family members raised money for out-of-pocket medical expenses by selling water at Street Fair, organizing golf scrambles and 5K runs and printing T-shirts and bracelets with a message that, to Barclay, says it all— “Team Chase: No One Fights Alone.”

“I’m just completely touched by the way people have gone out of their way to say something or do something for Chase,” Barclay said. “That’s what gets me through.”

“You do feel like — it’s cancer, it’s bad, it’s scary — but there are amazing things that happen along the way,” Barclay added. “There are people who step up and say ‘What can we do?’ Those things you take for granted. I’m so thankful I’ve been in this community.”

The Barclays live on a farm in Clark County, while Chase and brother Tucker, a sixth grader, attend Yellow Springs Schools through open enrollment.

In April Chase started complaining that he was unable to keep up with his teammates on the YSHS baseball team. After he couldn’t shake a cough for a week, Barclay took him to Urgent Care, where he was diagnosed with bronchitis and given a course of antibiotics. Then three weeks later he coughed up a small, dark red mass. The family rushed to the emergency room at Dayton Children’s Hospital, where a chest scan revealed a five-inch long tumor in his left lung that turned out to be cancerous.

Soon after Chase was diagnosed with an extremely rare lung cancer known as pleuropulmonary blastoma, or PPB. There are only 35 to 40 cases of the disease diagnosed in the world each year, most affecting children from the newborn period through age 12, according to the international PPB registry website. Chase, who is only the 543rd person in the world to be diagnosed with PPB since it was identified in the mid-1980s, is also far older than most children with PPB.

“It’s a very rare presentation of a very rare cancer,” Barclay said.
The causes of PPB are unknown, but since it occurs in very young children, genetic rather than environmental causes are suspected, Barclay said.

During a five-and-a-half hour surgery in April, Chase’s left lung was removed, while he also underwent chemotherapy treatment before and after surgery that zapped his energy and his appetite. Chase dropped 15 pounds and missed several weeks of school.

Still, on April 30 Chase was able to sit on the bench with his YSHS baseball teammates as they won for the first time in three years — their only victory all season — a 10–0 triumph that Coach Ben Cooper said was inspired by Chase’s presence.

With the help of his teachers at YSHS, Chase finished his freshman year. He was able to complete some assignments online and his teachers helped him catch up on the material when he returned with just three weeks left in the school year. Though he was frequently sick, and tired, Chase completed his schoolwork.

“That’s the beauty of a small school,” Barclay said of the support he received.

Meanwhile, at Mills Lawn, Barclay was stressed to miss the entire week of Ohio Achievement Assessments, which took place when Chase was getting his initial diagnosis, but she was relieved that Mills Lawn School Counselor John Gudgel was there to keep her students calm. “My students did amazingly well on the tests,” she said.

Sylvia and Laura Ellison were the first villagers to step up to raise money for the family. Though the Barclays have good health insurance through Yellow Springs Schools, out-of-pocket expenses like co-pays were mounting. The Ellisons organized to sell water at Street Fair in June with the motto: Chase Your Thirst Away, and also sold “Team Chase” T-shirts.

In early August, Dionne’s sister-in-law organized a 5K run in town, with help from Nan Meekin and YSHS grad Paloma Wiggins. They aimed for 300 runners, but 500 showed up that day, paying a $20 entry fee that went towards Chase’s medical expenses.

“Those are the thing things that really make me cry,” Barclay recalls of the 5K. “I literally showed up on that day. I did nothing to organize it.”

Barclay did have bracelets made with the motto “Team Chase: No One Fights Alone,” a saying which she said rings true for her.

“I’ve heard a lot of people say, ‘I don’t know how you’re doing it.’ How we’re doing it is because people say, ‘We love you, we’re thinking about you,’” Barclay said. “What I’ve wanted from the beginning is thoughts and prayers, that’s what I have appreciated the most. I’ve had a few of those moments where you really do feel like you’re not alone.”
Other gifts began flooding in, like meals and gift cards for steak dinners, which Chase was intent on eating weekly after his appetite returned.
On the last day of school, YSHS student Anndee Pettiford organized fellow students to wear a new “Team Chase” T-shirt she printed, which resembled a jersey in Bulldog blue and white with Chase’s baseball number, 45, on the back.
In the summer, YSHS baseball coach Ben Cooper arranged for Cincinnati Reds professional baseball player Chris Heisey to call Chase. On the phone, Heisey asked Chase who is his favorite Reds player, and Chase responded honestly that it was Joey Votto. Later, Chase got a package in the mail with Reds wristbands emblazoned with his number, and two signed baseballs — one from Heisey and one from Votto.

“I worry, ‘Are people ever going to know how much we appreciate everything?’” Barclay said of the outpouring of support their family received. “I’m trying to write everything down, so at some point I can write thank you notes.”

As of September, Chase’s successful surgery, response to chemotherapy and the lack of detectable cancer cells are reasons to be optimistic, Barclay said. He continues to undergo chemotherapy treatments once every three weeks and has been attending school with few absences. His strength, graciousness and sense of humor in the face of the disease continue to amaze his family, Barclay added.

And even with one lung, once Chase recovers his stamina, he should be able to play baseball for the Bulldogs come spring.

For updates on Chase’s progress, or to make a donation to the Barclay family, visit: http://www.caringbridge.org/visit/chasebarclay