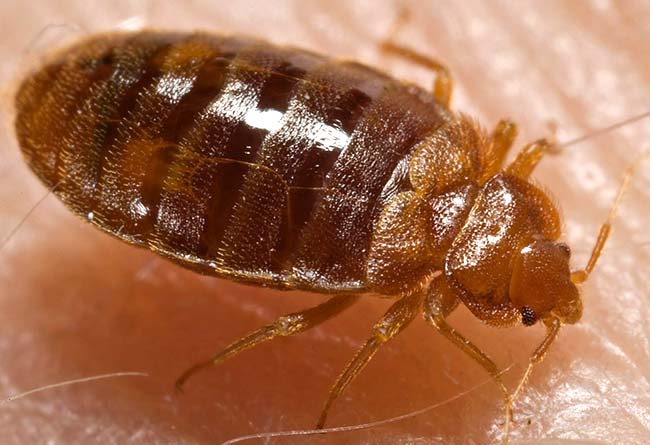 A photograph of a mature bedbug. The adult is approximately the size of an apple seed. (Photo from the Centers for Disease Control)

Doing battle with the bedbugs

Think of it: blood-sucking parasites lurking between your bed sheets, feeding on you in the night without your knowing, then slinking away to hide and multiply while you wake up with itchy bites and welts. It’s the stuff of horror films, but this Halloween season the reality of bedbugs is hitting home — local homes, that is.

“There’s no shortage of bedbugs here,” according to Brian Magee of bedbug exterminators Eco-Therm, which receives 60 to 70 requests every day to treat bedbug infestations in Miami Valley homes.

About three to four calls come in each month for Yellow Springs, on par with the region, added Magee, while bedbug treatment products available locally at Downing’s Do-It-Best hardware store are frequently sold out, according to employees. One outbreak locally is taking place at the Lawson Place public housing complex.

“Everyone is fair game to get bedbugs — they don’t discriminate,” Magee said of bedbugs in Yellow Springs.

The bedbug crisis is worsening in a region of Ohio already known as a bedbug hub. According to the latest report from Terminix, Cincinnati is the most bedbug-infested city in the nation, while Columbus is one of the fastest-growing cities for bedbugs. Dayton was 11th in bedbugs in a recent Orkin ranking.

According to information from the National Center for Healthy Housing and the Centers for Disease Control, bedbugs can travel through wall voids, water pipes, wiring and ductwork in multifamily buildings. They are accidentally brought into homes on clothing, backpacks, overnight bags, books, used furniture and other items. And they come from hotels, doctor’s offices, movie theaters, public transportation and other sites.

The wingless bugs grow from translucent nymphs the size of a pinhead to reddish-brown flat and elliptical insects about one-eighth inch to one-quarter inch in length, appearing similar to a flattened apple seed, according to a report from Beyond Pesticides.

While not a public health hazard because they do not transmit disease, bedbug bites can cause allergic reactions like swelling and welts in about 30 to 40 percent of people, Magee said. Others may not know for months that they have bedbugs, since they feed in the early morning hours and inject a numbing agent to keep the blood flowing. Bedbugs can cause psychological issues too, including anxiety, paranoia and insomnia and even, in severe cases, anemia.

For those with a bedbug infestation, sleeping can be a nightmare, while treating it is exhaustive, time-consuming and expensive. Even worse is letting an infestation get out-of-hand, as a few bugs brought into the home can multiply to hundreds within 10 days and around 3 million bugs within a year, according to Magee. Three million bugs can consume 10 quarts of blood in one night, he added.

Magee urges swift action when bedbugs are first seen, as the cost to eradicate them goes up rapidly as the bugs breed and multiply. And homeowners shouldn’t overreact by throwing away furniture, as most items harboring the creatures can be saved with heat-based treatments that raise a room’s temperature to 120 degrees, killing the bugs wherever they hide.

“If you have 10 bugs, we can come in with dry and wet sprays and you can cure it for $150,” Magee said. “The problem with the bedbugs we see is they have them two to six months before they realize they have a problem.”
A typical treatment for a home with a bedbug infestation runs between $500 and $1,500, Magee said, while he has treated apartment buildings for upwards of $25,000.

Bedbugs infest Lawson Place
Tracking down bedbug victims can be as difficult as locating the elusive bugs — which can hide in everything from a mattress seam to a book on the nightstand. But one documented bedbug infestation is now occurring at the Lawson Place public housing units, where tenants and building owners are frustrated with one another as the problem grows.

Bedbugs are gaining a foothold in several Lawson Place apartments, according to Barbara Brookshire, who runs a homemaker program out of the Yellow Springs Senior Center that serves some Lawson Place residents. One reason is because the response from Greene Metropolitan Housing Authority, or Greene Met, which owns and manages the properties, has been slow and insufficient, Brookshire said.

“I know that there are financial limitations for [Greene Met] and the client and I don’t want to point fingers at anyone. I just want more reaction quickly, I want them to get on it right away,” Brookshire said in a recent interview, who added that all Yellow Springs residents should be alarmed at the situation.

In one recent case, a bed-ridden resident was unable to escape the nightly onslaught of bedbugs, which were coming out of the walls and dropping from the ceiling, according to Brookshire. Greene Met took weeks to bring an exterminator to the apartment, Brookshire added.
“The person there is not mobile and is being eaten alive,” Brookshire said. “I had the feeling that I was in a horror film.”

A previous case of bedbugs in a nearby apartment that also went unaddressed for weeks by Greene Met may be the culprit in the new infestation, added Brookshire.

Greene Met Executive Director Brenda Smallwood said having bedbugs is a “terrible situation” for residents and that the housing agency takes the problem seriously. But Smallwood asserts that tenants aren’t reporting bedbugs when they first appear, making infestations more difficult, and costly, to eradicate, and allowing bedbugs to spread to neighboring apartments. Other tenants procrastinate on preparing their apartment for the exterminator.

“It’s very important as soon as they’re sighted that people contact us,” Smallwood said. “We try to be really proactive and jump on it, but we also need to get the tenant if they’re able to partner with us to do the steps that we need them to do so we can be successful.”

Before Greene Met will send in an exterminator, which uses freeze treatments and targeted sprays, residents must first complete a checklist that includes laundering all clothing, cleaning closets, removing sheets, blankets and mattress covers, and cleaning clutter. A treatment won’t be successful unless the units are prepared, and the housing authority simply can’t afford repeated treatments, Smallwood said.

If a resident needs help completing the preparations, Greene Met works with their family members, caregivers, or case workers with the Greene County Council on Aging, Smallwood said. But Brookshire believes that such preparations are an enormous undertaking that many of Lawson Place’s elderly and disabled residents may have difficulty completing, even with help.

Brookshire also believes the spread of bedbugs could be halted at Lawson Place if Greene Met inspected neighboring residences more often and educated residents throughout the complex. One resident, who lived next to a known infestation, didn’t learn that there was a bedbug problem next door until the exterminators arrived on scene several weeks later. The resident, who prefers to remain anonymous, had seen the bugs in her bath tub but misidentified them through an Internet forum. Since then she has sprung into action, buying treatment products at her own expense to keep the bugs from feeding on her, but has been suffering from stress and anxiety.

Smallwood said that Greene Met does inspect neighboring properties when an infestation is found, provides a packet of information when residents move in about bedbugs and how to spot them, performs move-in and annual inspections for bedbugs (and also checks when called out for repairs or other complaints). Greene Met also sells mattress encasements specifically designed to keep out bedbugs (or trap and kill those already there) for $80.

According to a report from the National Center for Healthy Housing, the best case scenario for dealing with bedbugs in apartments is when tenants report them promptly and management takes swift action.

“Bedbug infestations get out of hand when staff doesn’t know about them, does not take action, does not communicate preparation instructions to residents, or residents do not comply either because they can’t or won’t,” according to the report.

Prevention the best medicine
According to Magee, the bedbug problem is not going away soon — bedbugs will be with us the rest of our lives and some are even evolving a resistance to the most commonly-used chemical treatment. While bedbugs disappeared after World War II when strong but toxic pesticides like DDT were in use, they have come back with a vengeance in recent decades, Magee said. One reason is that federal regulations prevent the use of some formerly effective pesticides, Magee said.

But there is much that homeowners and tenants can do to prevent an infestation.

Magee advises that people vacuum their mattress and wash sheets often while they inspect for bedbugs, their fecal matter or their encasements and blood stains on mattress seams and elsewhere in the bedroom. Children should place items like backpacks in plastic totes when coming home from school. Clothes should be immediately laundered in hot water when returning from suspect places like hotels. People should also be careful when returning from hospitals and doctors offices, which seems to be the most common way that his clients tracked bedbugs into their homes, Magee said. Removing clutter is another key to prevention and successful treatments of bedbugs, he said.

“Bedbugs thrive and survive in cluttered homes,” Magee explained. “Homes that have big libraries, lots of artwork, lots of trinkets and decorative items — it offers them more opportunities for places to hide.”

Magee said bedbugs are easy to kill, but hard to find. The elusive parasite seems to drive people to extreme and irrational measures. Many people needlessly throw away all their furniture, and one recent client scrapped a $7,000 custom mattress. Meanwhile there is a stigma associated with an infestation, keeping those infested from warning friends and neighbors.

In the end, the worst effect of an infestation may be psychological, Magee said.

“Probably one of their main things that bedbugs do is play games with people’s heads,” Magee said. “They become very paranoid and every bug they see is a potential bedbug. But I guess that’s good if it is a bedbug.”

For photos, a video of a severe infestation and tips on prevention and remediation of bedbugs, visit ysnews.com.

2 Responses to “Doing battle with the bedbugs”