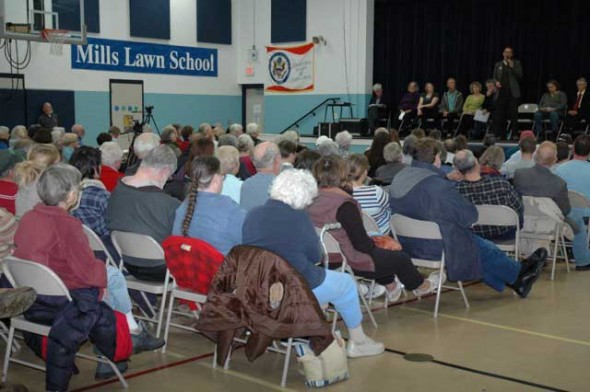 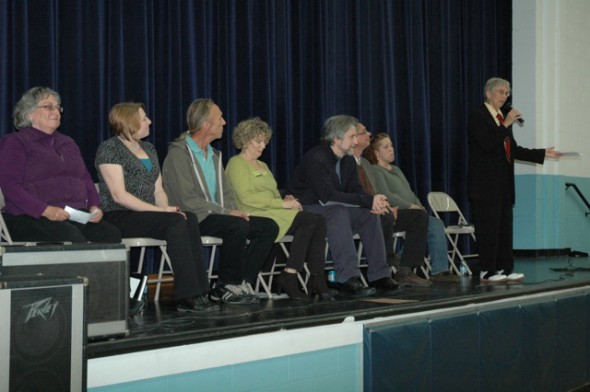 A panel of eight candidates running for three seats on Village Council gathered before a full house at Mills Lawn auditorium Thursday night to answer questions and talk about their ideas for the village. Each candidate gave a five-minute introduction to their platform, after which they answered questions submitted by audience members, about 200 strong. Current Mayor David Foubert, who is running unopposed, also spoke briefly. Bruce Heckman moderated the event.

Local business owner Patty Purdin focused on Yellow Springs as a “perfect village” whose qualities she felt moved to support through public office.

Local business owner Christine Monroe-Beard spent her time with the mic talking about growing local jobs and broadening the tax base by supporting business growth in the village. And she pushed the idea of the Center for Business and Education, or CBE, as a critical and necessary way for existing businesses to expand locally as well as to attract new businesses.

Monroe-Beard also favored “running the Village more like a business,” she said.

Incumbent Rick Walkey talked about the accomplishments Village Council had made during his four-year tenure, including crafting a new and improved Village zoning code, preparing the CBE for its next construction phase, and solidifying a permanent conservation easement for Glen Helen. He also spoke of future goals to hire a Village manager who understands the diversity of thought and participatory government in the village.

He hoped to keep Yellow Springs as a welcoming village to “families, entrepreneurs, artists, dreamers and bench sitters, alike,” he said.

Incumbent Karen Wintrow recognized the village’s rich history as a well-balanced working community with the people, jobs and philanthropy to be self-sustaining. She stressed the need to strengthen the economic base in order to continue that trajectory and still afford the Village’s increasing operating costs and stagnant revenues.

Dan Reyes said he wants to help the village rise to meet the intention and expectations of its citizens. His skills as an architect and college professor would help him to analyze infrastructure needs as well as dialogue with the community about future directions for the village.

Candidate Brian Housh, who has been active with YSopoly, YS Kids Playhouse, YS Arts Council and the Bronze Symposium, spoke about the potential for the village’s arts and creative community to attract both people and businesses to promote growth, jobs and engaged citizenship. The CBE and economic development is also a primary issue, he said.

Chrissy Cruz, a self employed baker who raised two children in the village, believes in “growth from within,” she said. She wants to support existing businesses and the needs of existing residents in a “build it and they will come” approach to governance and Yellow Springs’ future.

Marianne MacQueen, wearing her orange and red MacQueen plaid, spoke of her grandfather’s unique commitment to buying local and her family’s tradition of community service. Having worked with notable Antioch College President Arthur Morgan when she came to the village in the 1970s, MacQueen invoked his idea of “long-range pragmatism” and sustainability before its time. Personal and fiscal accountability and economic development were among her key goals as a candidate for Council.

More on this story will appear in next week’s print News.