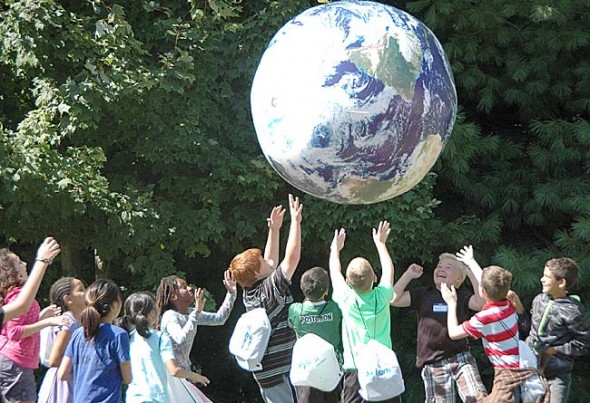 Mills Lawn Elementary School fifth and sixth graders took a field trip last week to YSI Inc. (a Xylem brand) to learn about local and global water issues as part of a collaboration with the water-monitoring equipment manufacturer. YSI/Xylem has also purchased water test kits for the school to commemorate World Water Monitoring Day. Here students in Dionne Barclay’s fifth-grade class work together to keep a giant model of the earth afloat, symbolizing the need for everyone to chip in to save the planet. (Photo by Megan Bachman)

On a recent field trip, the Mills Lawn Elementary School students weren’t the ones bouncing off the walls — they were doing the bouncing. The fifth and sixth graders who spent a day last week at YSI Inc. (a Xylem brand) learning about local and global water issues bounced a giant model of earth to symbolize the need for everyone to chip in to save the planet. It was one of many fun and educational events during the field trip, which commemorated World Water Monitoring Day.

Students also absorbed the concept of water scarcity as they tried not to spill a single precious drop during a relay race and empathized with the millions of people that must walk long distances to fetch water everyday by walking with brimming jugs of water around a prairie.

YSI/Xylem, a 65-year-old local company that develops and manufactures water-monitoring equipment, hosted 104 Mills Lawn students on its Brannum Lane campus on Tuesday, Sept. 17. In addition to playing water-related games, students heard talks from YSI employees, toured the manufacturing plant and offices and learned about local rivers and aquifers from University of Dayton students.

Aimed in part at the “young engineers out there,” the event was a mix of hard science and good fun, according to Anita Brown, executive assistant to YSI General Manager and Xylem Vice President of Analytics Ron Geis.

“The goal is to teach them about local water and how other people in the world deal with the scarcity of water,” Brown said. And for Yellow Springs Schools, the collaboration fits perfectly into the district’s new focus on Project-Based Learning, she added.

YSI was recently encouraged by Xylem’s head office in White Plains, N.Y. to do one educational outreach activity in the community each year. Working with youth is a way to drive home the message early, and often, that water quality is important, according to Geis.

“The key for me is supporting the younger generation,” Geis said. “[It’s] to help them understand the importance of water and to make sure water is pure in their towns.”

YSI/Xylem also purchased water test kits for the students to sample local water quality, with initial plans for them to test water in Glen Helen and at Ellis Pond, according to Brown. The results from those tests will then be compiled with data from around the world as part of the World Water Monitoring Challenge, an all-year-long international program that World Water Monitoring Day has become. Xylem is one of two sponsors of the program, which is aimed at empowering citizens to conduct basic monitoring of their local water bodies. In 2012, the World Water Monitoring Challenge donated almost 13,000 water test kits to people in 66 countries.

During the field trip, students learned how little of the earth’s water is available for human consumption — less than one percent, in fact — while running a relay race with a measuring spoon of water. In another exercise, students gathered around a 72-inch diameter inflatable model earth and listed off global environmental issues they are aware of, including acid rain, “smoke from factories,” fertilizers and global warming. They then worked together to keep the ball in the air, symbolizing the need for everyone to do their part to care for the earth, according to a YSI employee. Students also lugged jugs of water around an acre to see how it feels to have to carry water long distances while learning that every day 200-million-hours are spent by people in the world — mostly women — to carry water for their families.

“They face certain death without water, or the possibility of contracting a water-borne disease,” Brown said of much of the world’s population.

Inside the YSI/Xylem facility, students heard presentations from different departments. An IT employee shared the startling statistic that more people in the world now have a mobile phone than a toilet. At research & development students learned how to turn a $2 prototype of a water sensor into a product that the company can sell for $30,000 and saw a demonstration of a 3-D printer. Human Resources led the students in an exercise on how adults balance life, work and hobbies and stressed the role of teamwork for a business to succeed.

Students also learned about the history of local rivers, aquifers and dams in the University of Dayton’s Rivers Institute Rivermobile, a 53-foot mobile classroom with interactive, museum-quality exhibits. In one exhibit video, an animated cartoon version of Arthur Morgan teaches students about the region’s aquifer. Morgan, who died in 1975, settled in Yellow Springs after designing a flood control project for the Miami Valley a century ago. Last year Xylem gave an unspecified amount to help build the $300,000 Rivermobile and also donated water quality testing equipment to the project.

According to fifth grade teacher Dionne Barclay, the visit to YSI was one of the best field trips in her 22 years with the district. She was impressed with her students’ awareness of the 1913 Dayton flood and their detailed questions on how YSI’s sensors pick up information from the environment. There was something for every kid, she said.

“It was more than just science. They got to see so much, so they each latched onto something,” Barclay said. While the school has historically collaborated with village groups for arts projects, it has less frequently engaged in science collaborations, she added.

Sixth-grade teacher Vickie Hitchcock agreed that the field trip was exceptional because students learn best from hands-on activities. It was also an opportunity for her students to pepper YSI engineers with detailed questions on water monitoring equipment that she couldn’t answer. The collaboration began long before the field trip, added Hitchcock. As part of a unit on water, Hitchcock’s and Barclay’s classes have explored the affect of water pH levels on ivy growth and tested the pH levels of household products, all with equipment on loan from YSI/Xylem.

The collaboration came about as YSI/Xylem has been recently looking for ways to engage the local community since the YSI Foundation was shut down last year as a consequence of Xylem’s acquisition of YSI, according to Brown. Xylem has its own company foundation, Watermark, based in New York, but it is mainly focused on water issues in developing countries such as providing safe water and hygiene education, securing water in vulnerable areas, and delivering water in the aftermath of emergencies, according to the Watermark website.

Meanwhile, YSI is continuing to grow locally, according to Geis. In recent years the company has added more jobs in sales, marketing, operations, research and development, customer service and repair center to bring the total number of full-time employees to 189 (200 including temporary workers). In 2012, YSI saw double-digit growth for the second straight year. Revenues were $110 million in 2011, according to Geis in a 2012 interview.

Much of the growth locally is taking place in a product line called Waterlog from a company YSI acquired in 2009. Manufacturing and customer service for Waterlog were recently moved to Yellow Springs, according to Brown. The company is also now building a new electrical transformer to accommodate Waterlog’s production locally, with plans to “continue to grow and invest here,” Geis said.

In August the board of Xylem, the $3.8 billion global company that purchased YSI in 2011, met at YSI for a full board meeting. According to Geis, for a public board to meet at a manufacturing plant is extremely rare and the board’s feedback was positive. Board members even talked about “cloning” the YSI model, Geis said.

“They want to acquire companies like us because we’re highly profitable, we know where we want to go and we have motivated employees invested in the business,” Geis said.