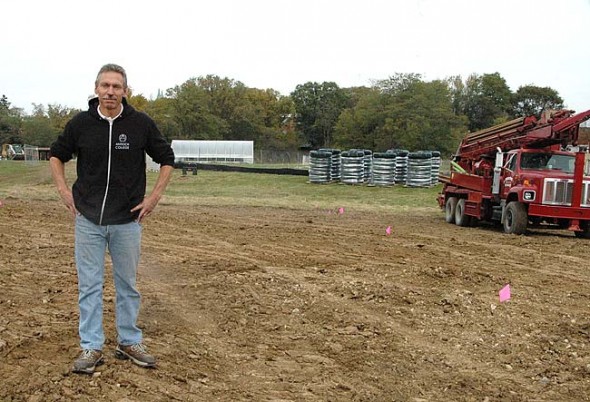 This week Antioch College facilities manager Reggie Stratton stood in a section of the Antioch farm where 150 geothermal wells will be drilled 300 feet underground over the next month. Flags note the locations of the wells. Antioch’s new $8.8 million central geothermal system will heat and cool campus buildings while saving $400,000 in annual energy costs. (Photo by Megan Bachman)

Antioch College will begin construction of its central geothermal system on Friday in what the college sees as a significant step to becoming carbon neutral.

The new $8.8 million closed-loop geothermal heating and cooling system will save Antioch $400,000 in annual energy costs, and, in conjunction with a planned solar photovoltaic array, would make Antioch the only college heated and cooled exclusively by geothermal and solar power, according to a college news release.

“The combination of the two [systems] are hugely important for us to reach this carbon neutrality,” Antioch Facilities Manager Reggie Stratton said this week. “We’re not there yet — it will take a few years — but both of those systems will take us a long way to getting there.”

During the first phase of construction, which will cost $4.7 million and be completed by next April, 150 geothermal wells will be installed 300 feet deep under about three acres of the Antioch College Farm, a 35-acre parcel on the southern edge of campus previously known as the golf course. The well field is just south of E. Herman Street on the western edge of the farm.

Well drilling begins on Nov. 1 and will take six to eight weeks to complete, according to Stratton. The college will drill from 7:30 a.m. to 4 p.m. on weekdays.
“Doing this work will be loud and messy,” according to Antioch College President Mark Roosevelt in a statement. “We will make every effort to contain both the noise and the mess … We respectfully ask our neighbors to bear with us for the next several weeks as we sink these wells.”

The first buildings heated and cooled by the geothermal system will be the Science Building, the renovated theater building and the new Wellness Center, projected to open in June. With a total capacity of 300 tons, the wells installed this year will allow South Hall and McGregor Hall to come online during the project’s second phase, which is contingent upon fundraising. A third phase, connecting Birch Hall, a new dormitory and additional buildings by 2017, would mean the installation of additional geothermal wells. The initial phase was financed through loans against the portion of the college’s $44-million endowment gained from a 2011 YSI, Inc. stock sale.

Construction has also begun on the central geothermal plant in the former maintenance building, located just south of the library, which will be refurbished with new windows, a new roof and stocked with the plant’s equipment, including heat pumps, chillers and heat exchangers.

A geothermal heating and cooling system works by using the constant 50 to 55 degree temperature of the earth to more efficiently heat or cool water. During the winter, the water flowing through the underground pipes absorbs the earth’s heat, while in the summer, the system is reversed and the water is cooled by the earth. After a heat exchanger extracts that energy, a heat pump or chiller delivers warm, or cold air into the buildings. Most of Antioch’s buildings now use gas-fired boilers and electric chillers, Stratton said.

Along with the geothermal well field and plant, the college hopes to erect a one-megawatt solar photovoltaic array on about five acres of the Antioch Farm next year through a power-purchasing agreement that has yet to be finalized.

“The reason that’s important is that the geothermal plant is all electric, so really the only way to offset that is by using solar,” Stratton explained.

Two smaller, stand-alone geothermal systems were installed at Antioch in recent years. During last year’s renovation of North Hall 30 vertical wells were buried underground in the “horseshoe” in front of Main Building to heat and cool that building. In 2011, 40 vertical wells were installed in the Corry Street parking lot of the Glen Helen Nature Preserve to heat and cool the Vernet Ecological Center and Trailside Museum.

According to Antioch Director of Communications Mark Blackmon, the college’s commitment to green energy focuses a national spotlight on Antioch and Yellow Springs and helps students learn about sustainability outside of the classroom.

“What we’re trying to say here at Antioch is we have to find new and better ways to live our lives because quite frankly the way most of us live is not sustainable,” Blackmon said. “And we can say it’s not just what you learn in the classroom, it’s how you interact with the world you live in.”

Impact on neighbors
An immediate neighbor of the project, Hilary Pierson, who lives at the end of E. Herman Street, supports Antioch’s intention to use green energy, but is concerned at the loss of a “treasured green space” and wished the college notified her sooner about the project, she said this week. Pierson said she was surprised last week to see bulldozers moving dirt to prepare the drill site, until receiving a letter from Antioch early this week explaining the college’s plans for geothermal, she said.
“I can support the college’s desire to be using alternative forms of energy, but at the same time the golf course has been a landmark of town for so long,” Pierson said. “I just want to feel like the village is aware that how the college is using the land is respectful of the neighbors and the community.”

In addition the college invited the project’s immediate neighbors of the farm to a private lunch meeting on Wednesday, Oct. 30.

Earlier this year, neighbors of the farm raised concerns when Antioch proposed a zoning change to allow more animals on its farm.

Blackmon said the college is taking steps to lessen the project’s impact on neighbors and that the disruption is only temporary. The college will complete drilling as quickly as possible, avoid drilling during evenings and weekends and replant grass in the area so that, come spring, the field will return to grass.

“We were very concerned that it wasn’t going to drag out forever, but digging 150 geothermal wells and sinking them is no small undertaking,” he said. “One of the beauties of this geothermal system is it’s all underground.”

The land atop the geothermal well field can be farmed but no buildings can be erected there once the wells are installed, Stratton added.

Stratton said that site engineering and test wells drilled on the site showed no problems, while the college received the necessary permits for the project, including Greene County building and health permits for the construction and plumbing work at the central geothermal plant and an Ohio Environmental Protection Agency storm water permit for runoff during construction.

No project approval or village permits were required for Antioch to install the geothermal system, according to Interim Village Manger Kent Bristol.

In addition, while some closed-loop geothermal systems circulate water that contains an anti-freeze agent like ethanol or ethylene glycol, Antioch’s system will only use water in order to avoid any environmental contamination, Stratton said.

Drilling will be completed by Crabtree Well Drilling & Pump of Springfield, which is a registered private water system contractor with the Ohio Department of Health. The project’s engineers were Schlagel Engineering of Springfield and the construction firm is Thomas Marker, of Bellefontaine.

No state permits are required for the installation of a closed-loop geothermal system, according to the Ohio Water Resources Council, though drillers must submit a well bore log to the Ohio Department of Natural Resources after drilling. In Ohio about 5,000 to 6,000 residential systems and more than 500 commercial systems are installed annually.

Buildings to come down
The college also announced this week that it will tear down two 1950s-era buildings on campus — Mills Hall and the Student Union. The Antioch Board of Trustees recently announced the move at the recommendation of its architectural firm, MacLachlan, Cornelius & Filoni, Inc., because the estimated cost to renovate the buildings is too high or the college doesn’t need the space.

Mills Hall, a former residence hall located off of President Street, will be razed in November after asbestos and other environmental hazards are removed from the structure. According to a college news release, Mills, built in 1959, has too much structural damage, would be difficult to convert to modern accessibility requirements and green building standards and doesn’t have a community or kitchen space.

“We expect that many alumni and friends will have a number of fond memories of these buildings,” according to Antioch President Mark Roosevelt in a statement. “However, as mindful as we are of our rich heritage, the new and better ways in which we are articulating the college experience at Antioch require us to make bold, informed decisions about our campus to make it both viable and sustainable in the 21st century.”

The Student Union, built in 1957 will also be torn down, though no date has been set for its demolition because of the high projected cost. In the mean time, the building’s interior will be altered to accommodate fire safety regulations. The damage caused by extensive mold and large roof leaks, along with high estimates for renovating the structure with new windows, roofing and HVAC systems and the lack of need for the space led to the decision to tear the building down, according to the news release.