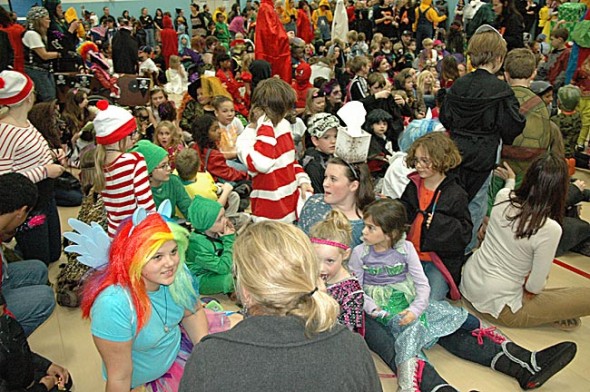 Bursts of color and activity filled the Mills Lawn School gymnasium as kids cavorted in costumes. (Photos by Matt Minde)

Even in light of Thursday’s postponement of the Village’s traditional Halloween evening Beggars Night, Mills Lawn students did not seem remotely dispirited. The school’s annual Halloween Parade did take place, albeit in the slightly more accommodating confines of the school gymnasium.

On parade were pirates and goblins, queens, princesses and firefly fairies, a whole host of robots and skeletons, plus some more unusual vestments, such as “a box of Kleenex” (see photo below). None too few were parents in costume, too; sometimes the only way to tell kids from their kin was by size.

The parade came to a head at the all-school assembly, where teachers and aides put on silly 1-minute skits, as with eight or so teachers rearranging themselves to spell out “Halloween” with letters on the front of their shirts. It took them a while.

To round out the celebration, kids returned to their classrooms, the younger ones guided by their “buddies” — kids from the fifth and sixth grade leading the way — where good food, movies and other fun games finished the day.

Many of the kids expressed enthusiasm that they will be able to don their costumes one more time at Beggars Night the following day.