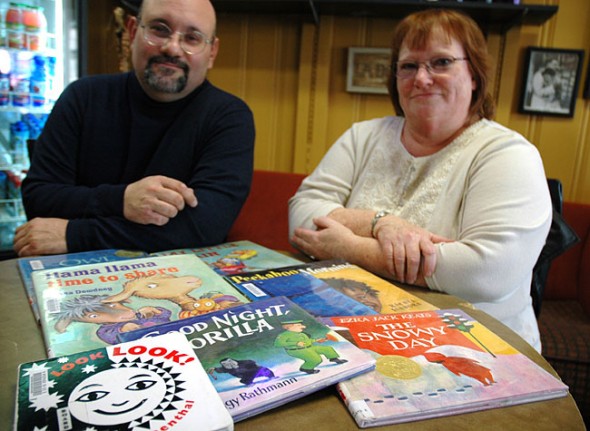 Greene County Library Director Karl Colón and Youth Services Coordinator Kay Webster helped to launch the Dolly Parton Imagination Library locally last month. All children under five can sign up to receive a free book mailed to their home each month as part of the program. Some of the books being sent are in the foreground. (Photo by Megan Bachman)

Books for kids, thanks to Dolly, Greene County Public Library

Every child under five in Greene County is now eligible to receive a free book in the mail once a month thanks to a partnership between country music legend Dolly Parton and the Greene County Public Library.

The Little Engine that Could, Goodnight Gorilla, Madeline and other classics are among the books that may be sent to enrolled children from birth to their fifth birthday for a total of up to 60 books they can keep. Parents can sign up online or at a library branch.

The Greene County Public Library Foundation raised $200,000 from local sources to launch Dolly Parton’s Imagination Library here last month. The rollout has been incredible; already 1,500 children have signed up, according to Karl Colón, the library’s director, which is more than 15 percent of the 9,000 eligible county children under five.

While children that young are not likely reading the books themselves, that age range is a “sweet spot” for the development of pre-literacy skills, which is why it’s so important they have access to books, Colón explained.

“Ideally we don’t want them coming into kindergarten a blank slate,” Colón said. “It’s easy for kids to acquire pre-literacy skills in that age range and after that range it gets a lot harder and takes more time and effort.”

Pre-literacy skills include learning how to identify letters, numbers and shapes, understanding the alphabet and sounds and basic print concepts like reading left to right, and being able to pay attention and react to stories.

Sending books directly to children’s homes is far more effective than trying to coax them into checking out library books, Colón said, which is why the library partnered with the Dolly Parton Imagination Library when it set out to tackle the local literacy problem. The entertainer and philanthropist started Imagination Library in 1995 in her native Sevier County, Tenn. because she wanted every preschool age child to have his or her own library. Parton now sends books each month to more than 650,000 children in 2,000 communities in the U.S. and three other countries, according to the program’s website.

Back in Greene County, 20 percent of Greene County children failed the third-grade reading test recently, a statistic that is “awful” considering that Greene County has the highest per capita education level in the state, Colón said. That spurred the local agency to action, and working with the Greene County Library Foundation they raised enough money to cover up to 8,000 children for the first year, with plans to raise enough for at least the next three to four years.

Colón, for one, isn’t too concerned that the free books will keep kids from visiting the library. Instead, he views the project as part of the Greene Public Library’s larger mission in the community.

“Their first 12 books might not come from us, but their next 500 will,” Colón said. “We’re not doing this to drive up circulation, we’re doing it because the public library is a public agency and we should be doing everything we can to promote literacy.”

Kay Webster, the library’s youth services coordinator, initially discovered the Dolly Parton Imagination Library and saw that it had proven successful in other communities. Recently, Middletown partnered with the Dolly Parton library to reach some 2,000 children there, and as a result saw a 14 percent increase in their Ohio Kindergarten readiness literacy test scores within four years, according to Webster.

By partnering with Parton, the amount that needs to be raised to cover a Greene County child for a year’s worth of free books is just $25. Imagination Library covers all administrative expenses and mailing, while local agencies are expected to raise the modest per child cost and promote the program locally. Imagination Library is already in about 30 locations in Ohio, but a countywide implementation of the program is more rare, Webster said. There are 137 children under five in Yellow Springs that are eligible for the program, according to the 2010 Census.

Several keys make the Dolly Parton project effective, Webster said. First, every child is sent a book, not just those in low-income or other demographic groupings. That’s important because income is not always a determining factor of whether or not there are books at home, Webster said. In fact, it is surprising how many families don’t have any children’s books, she said. And while Webster sees many parents with young children visiting the library, many check out videos, not books, for their children. Research supports the idea that book ownership leads to the development of pre-literacy skills, Colón added.

“When a two-year-old owns a book, they’ll hunt you down like a bounty hunter to get you to do something with it,” Colón said. “Having the book and owning it and being connected to it — that interaction alone during that developmental sweet spot leads to massive increase in pre-literacy skills.”

The book list rotates every few years so families with multiple children under age five don’t receive the same titles, while twins and triplets receive their own copies through the program, Webster said. The books are selected by an independent committee of educators, and this year the list includes Caldecott Medal winners such as The Snowy Day and Owl Moon. The last book, sent on the child’s fifth birthday, is Look Out Kindergarten, Here I Come!

Colón and Webster haven’t had to sell the project too hard, they said, because the benefits are obvious to everyone they speak to.

“The benefit to the community of having our kids entering school ready to read is huge,” Colón said. “Incomes are dividing along education lines and to think that we blew it because we didn’t get them books by the time they are four is gut-wrenching.”

While the library is devoting staff time to the project, financial support is coming from the Greene County Library Foundation, the United Way of Greater Dayton, Soin Medical Center, Greene Giving and other local partners.