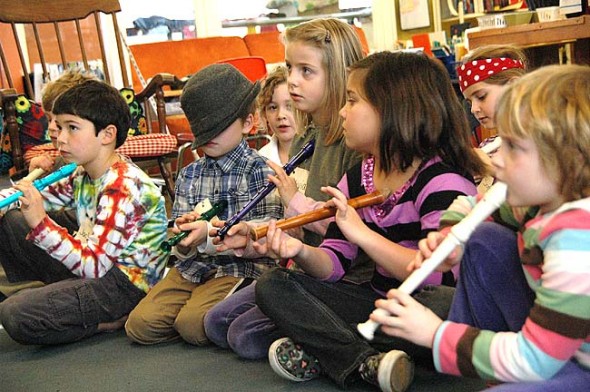 The Antioch School has always encouraged the musician in students interested in developing their skills and talents. And until last year the school’s fifth- and sixth-grade students had the opportunity to study an orchestra or band instrument at Mills Lawn. But this year the school formalized its music program by inviting artist-in-residence Dennis Farmer to start an introductory program during a year-long residency for all of the students from preschool through sixth grade.

On Thursday morning last week, Farmer led a lesson for cellist Zenya Miyazaki and violist Carson Cooper. Having studied for just a few months, the students worked hard to pluck through songs such as “Hot Cross Buns” and “Twinkle Twinkle Little Star” in preparation for their performance at the school’s annual holiday party on Friday, Dec. 13, at 6:30 p.m. One of their goals was not to look at their fingers as they played, which Farmer challenged them to achieve through a staring contest.

“But what about blinking?” Miyazaki asked with genuine concern. “Usually in a staring contest, you’re not allowed to blink.”

“Well, in this game you can kind of make up your own rules,” Farmer said patiently.

That same morning Farmer had a small wind ensemble, 20 first and second graders blaring recorders, and a group of kindergarteners and preschoolers singing “Do re mi” and practicing the difference between creSCENDO and DECREscendo. It was a full morning, and one Farmer values as a way to spread what he hopes will become for many of his students, a life-long love and appreciation of music.

“I really enjoy teaching and working with kids — that’s what it’s all about for me,” he said last week. “And for them, the rewards will last a lifetime.”

Farmer came to Yellow Springs public schools in 2005 as the Mills Lawn, McKinney and Yellow Springs High School band director. Then in 2010, budget cuts eliminated the orchestra director’s position, and Farmer took over the district’s entire music program for fifth through 12th grades. He initiated a jazz ensemble, an annual community/student band concert, and a music boosters program, before resigning this past summer.

Coincidentally, due to schedule changes last year, the Antioch School had to withdraw from the music program at Mills Lawn. Older Group teacher Chris Powell did what she could to offer guitar and recorder lessons. But the program was more informal, and the students had less opportunity to choose their instruments. So this year, the school chose to use part of the Emily Bailey Fund for the Arts for a structured residency with Farmer.

“This has really brought so much more music to the school — and all the kids in the Older Group are passionate and excited about doing it,” school manager M.J. Richlen said last week.

The fund is named after Emily Bailey, a former Antioch School student who died in 2000 at age 14.

“Um, I don’t really get that,” one student leveled. But Farmer is quick to assert that “I can’t” is not a part of the music vocabulary. And part of the reason he likes working with children is that they are less inclined to think in such a fatalistic manner. Because kids have less experience with failure, they are naturally more open to the possibilties, he said. And, according to Farmer, the possibilties with music are deep and varied. Music teaches not just about sound, but also about language, non-verbal communication, and fine motor skills, as well as experience with performance in front of an audience. And most importantly, music gives people a reason to get together, engage in group learning, and have fun at the same time.

“Getting together is the main thing — music is a social activity,” Farmer said.

The children feel they are doing something worthwhile. Both Cooper and Miyazaki said they really like playing music and find it quite easy. According to Cooper, “it’s been my dream to play all the songs I like,” including the theme of Dr. Seuss’s “The Grinch.” Similarly, Miyazaki was intent on learning to play the Pink Panther theme.

The rewards don’t come without hard work and practice. And when it gets a little difficult, Farmer is there to help motivate.

“If there’s a snow day, I can guarantee you two minutes of practice,” Miyazaki said.

They all smacked hands.

In the face of hard financial times, many public schools in the area have cut their music programs, including Yellow Springs schools, which reduced their elementary music teacher to a three-quarters position a few years ago. Feeder programs for the youngest of children often take the hardest hit, Farmer said. But some communities see the benefits of music education and have realized that music is part of the core curriculum, he said, and not just a pastime. The Antioch School is one such place, which Farmer feels fortunate to have found.

“Both the kids and the teachers have been very interested — that’s the culture here to be receptive to new things,” he said. “I’ve been amazed at the support and encouragement I’ve gotten. It sure has been nice for me.”