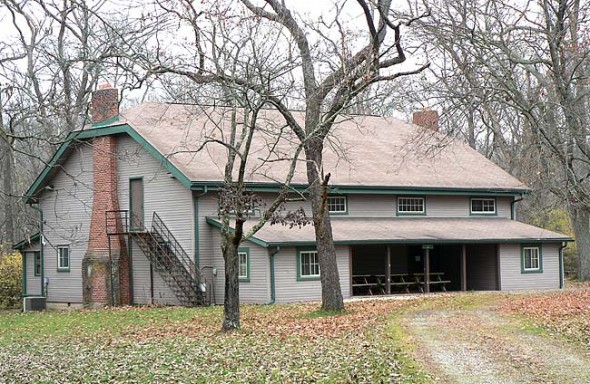 The 3,200-square-foot lodge and the surrounding Girl Scout’s Camp Greene, located off of Grinnell Road, could soon belong to the Glen. The Glen Helen Association has applied for grant funding with the Clean Ohio Fund to help purchase and permanently protect the 28-acre camp with a conservation easement. (Submitted photo)

It’s been nearly 50 years since Glen Helen has expanded its borders, but the preserve recently entered into an agreement that its leaders hope will result in the acquisition of 28 acres on the south side of the Little Miami River next spring. The Glen Helen Association is leading the charge to purchase the Girl Scout’s Camp Greene off of Grinnell Road with funding assistance from the Clean Ohio Fund. The move would transfer ownership of the property and put a conservation easement on it, protecting it in perpetuity along with the rest of the Glen.

“This is an opportunity to purchase a conservation easement on a property of ecological significance to Glen Helen,” said Nick Boutis, executive director of both the GHA and the Glen Helen Ecology Institute. “One of the most meaningful things the Glen can do is make sure that the land around it is protected and shares the same ethos.”

From the Glen’s perspective, Camp Greene is desirable for many reasons, including its location and its undeveloped state. The Girl Scouts purchased the wooded property located just east of Grinnell Road from the YWCA in 1955 and built a small, rustic camp, with one road, a few buildings and a cistern for running water. The property has been lightly used, as the Girl Scouts have many more developed camps in the region — one reason they decided to divest themselves of this one. But by virtue of its neglect, the property has remained an undisturbed habitat for many of the species of plants and animals that inhabit the Glen.

While the Girl Scouts of Western Ohio “rested” Camp Greene in 2009 and recently decided to sell the property due to low usage, according to spokesperson Ann MacDonald, the Scouts remain interested in occasionally using the camp and seeing the land used for public and educational purposes.

“The Glen is a really good match for us,” MacDonald said. “We’re invested in making sure [the camp] is available to the Girls Scouts and the public, and we’re really excited to be able to protect the property with a land trust.”

The camp is contiguous with the Glen and John Bryan State Park and would add to the 2,000-acre contiguous river corridor that’s been rated “exceptional” by the Ohio Department of Natural Resources for its cleanliness and biodiversity. The Glen side of that stretch of the river is also where local botanist Daniel Pierson located a group of rare native plant species that no longer exist anywhere else in the Glen. Since what one finds on one side of the river is likely to be found on the other side as well, Boutis said, protecting both sides of the waterway is important to maintaining that habitat.

“This would be an obvious example of protecting a resource and expanding a habitat in the region,” Boutis said.

The camp could also be useful to the Glen’s mission of environmental education. The high plateau includes a 3,200-square-foot lodge, a dorm with a few dozen bunks, and about seven wooden platforms designed for canvas tents. A steep slope leads to the lowland third of the property along the Little Miami River, which includes a series of trails and what was once called a sports field.

According to GHA member Bill Kent, “there isn’t another room like [the lodge] in Yellow Springs” that can be used to host large events. And the dorm and platforms could also expand the Outdoor Education Center’s ability to host multiple overnight groups throughout the year, Boutis said. The property does have electricity, but its water and sanitary system is fed by a cistern, which would tend to limit its use and potential for expansion.

But land conservation is the main goal for the property, which doesn’t have any long-term protection as a Girl Scout property. Camp Greene is one of three camps in the Western Ohio region the Girl Scouts decided to sell in 2011. One was purchased with the help of the TriMoraine Audubon Society and became part of the Bellefontaine parks system. The other, located in Indiana, was sold to a private buyer.

The Glen doesn’t yet have an estimate on the purchase price, which under Clean Ohio application rules must be appraised by someone registered with the Ohio Department of Transportation. Clean Ohio will fund up to 75 percent of the purchase cost, to which the GHA will need to add matching local funds. The Glen expects to have an estimate within the next few weeks and hopes to hear the grant results sometime in early spring, according to GHA President Dan Halm.

Village Council approved a resolution at their most recent meeting to support the acquisition, and the Glen is also seeking similar support from the Miami Township Trustees and the Greene County Commissioners.

GHA board member Sam Young, who lives across the street from a portion of the Glen, feels the value of preserving green space and the habitats that southwest Ohio’s native species need to thrive is important.

“The protection of green space around the Village, Miami Township and in Greene County is vital for protecting our water supply and preserving the ecology of the region in which our respective governments exist,” Young wrote in a recent memo to Village Council.