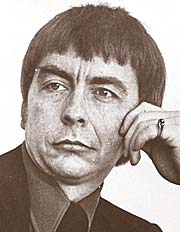 Glenn Robert Owen died peacefully and unexpectedly in his studio “sanctuary” on Tuesday, Dec 3. He had finished his last painting that previous Sunday.

Glenn was born on April 8, 1935 in Cincinnati. He studied art at both the University of Cincinnati and at the Art Academy, where he met his first wife, Luisa. He obtained a bachelor’s degree in education from Miami University in 1962. In the same year, he accepted a position teaching kindergarten through 12th-grade art in the Yellow Springs school district. He taught in Yellow Springs for 10 years, a period that he often reflected upon as his “golden age,” for the many important connections that he made with his students and colleagues. During this time, he also taught classes at Antioch and at Central State. Many of his Yellow Springs students fondly remember his aesthetics class, which was an hour before regular classtime and was “standing room only.”

In 1972, he moved to Lebanon, Ohio and taught at the northwest school district for another 10 years. He left teaching in 1982 to work as a printer in his father’s printing shop in Cincinnati, until 1999, when he retired and moved back to Yellow Springs.

Glenn was a prolific and passionate painter. To put his philosophy into his own words, Glenn believed that, “Art is the expression of the human spirit, the link between past and present, between cultures, between ‘I and Thou,’ between God and Man, art is communication through communion. It is that which gives me purpose, and reason to be.”

He is survived by his son, Erik and his daughter-in-law Deirdre, his grandchildren Marina and Oona, his two sisters Phyllis and Elaine, and his mother, Clara. Glenn touched the lives of countless individuals through his teaching and his friendship. He will be deeply missed.

There will be a retrospective of 60 years of his work on April 6 at the Glen House from 1–7 p.m.