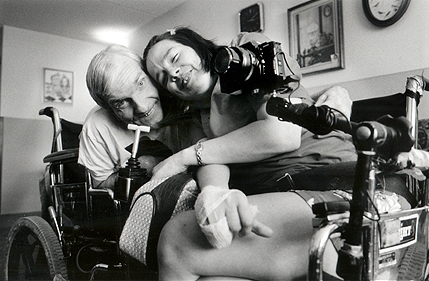 A group of villagers are offering a series of events this Saturday, Dec. 7, to highlight the perspectives of people with disabilities. A documentary, Shooting Beauty, will be shown at the Little Art at 2 and 4:30 p.m., with a panel discussion on the topic of inclusion at 3:30 p.m. at the theater. A potluck dinner at the First Presbyterian Church will follow at 6 p.m. The above couple, Cathy and Dana Culkin, are two of the film’s subjects. (Submitted photo by Courtney Bent)

When Debra Williamson and her 15-year-old son, Alex, recently put up flyers in downtown stores for an upcoming event, she was pleased that several people, saying hello, called out to Alex by name.

“I’m sure it made him feel good, to feel a part of the community,” Williamson said of her son, who has developmental disabilities.

And while in many ways Yellow Springs has proved a nurturing place to raise Alex, there is room for improvement. Toward that end, Williamson, a member at the Human Relations Commission, has organized a series of events that she hopes will increase villagers’ sensitivity and awareness of those who are challenged by mental or physical disabilities. The event takes place this Saturday, Dec. 7, shortly after the International Day of Persons with Disabilities, which was Dec. 3.

In Yellow Springs, the day will be marked with two showings of Shooting Beauty, an award-winning documentary that, according to a press statement, “tells the inspirational story of an aspiring fashion photographer, Courtney Bent, whose career takes an unexpected turn when she discovers a hidden world of beauty at a center for people with significant disabilities.” The film will be shown at 2 and 4:30 p.m. at the Little Art Theatre. A panel discussion on the topic of inclusion will take place at the theater at 3:30, and a potluck dinner will follow at 6 p.m. at the First Presbyterian Church, along with related activities and discussions. All of the events are free and open to the public.

“I hope this film strikes a chord with artists, those with disabilities and those with open hearts,” Williamson said.

The panel discussion will include Julie Williams of the Wright State School of Professional Psychology, who is a dwarf; local school nurse Michelle Brown; parents Sylvia Ellison and Trisha Gustafson; and J.K. Laurens, who has worked with veterans with post traumatic stress syndrome.

The event is co-sponsored by the Little Art, the Yellow Springs Human Relations Commission and the National Council of Community and Justice of Greater Dayton.

Williamson, who formerly lived in New York City and worked at the New York City Stock Exchange, moved to Yellow Springs almost seven years ago, to be closer to her parents, who live in Enon, and to find a supportive place in which to raise her son.

“It was important to me to be in a place with a strong sense of community around Alex,” she said.

Things have largely worked out well.

“Most people are very open to him, very accepting,” she said, stating she also appreciates the responsiveness of the special needs staff at the Yellow Springs public schools, where Alex is now in high school.

But there are still too many times in the village when people stare awkwardly at her son, or ask her, in his presense, what’s wrong with him.

“It’s hurtful, but coming from a place of ignorance or fear,” she said. “Some people see those with disabilities as not quite existing, not valuable.”

Williamson hopes that the Dec. 7 event, which she would like to make an annual happening, helps to broaden the understanding of those who don’t have firsthand experience of disability. And that group is constantly changing, as, unlike race or ethnicity, the experience of disability is fluid, with many becoming disabled as they age. Up to 15 percent of the population copes with a mental or physical disability, Williamson said.

“The reality is how much this is across the board,” she said.

For Gustafson, whose 10-year-old son, Owen, is wheelchair-bound due to muscular dystrophy, the event is an opportunity to create a “broader mindset” so that perhaps this small community can better embrace those who are different.

For instance, Owen cannot enter most downtown stores because they’re not accessible to those in wheelchairs, nor can he do anything at the Mills Lawn playground other than sit and watch other children play.

“Every aspect of his life has barriers,” Gustafson said in an interview this week.

While Williamson and Gustafson hope the Dec. 7 event increases awareness and sensitivity to those with disabilities, they also hope that that greater awareness can be followed by specific changes and creative thinking. For instance, according to Williamson, as Alex and his peers get older, they face a host of new barriers to living a full life, even in a small town. While Alex has friends at school, few reach out to him after school, so his age-appropriate desire to be a part of a group remains unfulfilled. And while he and others his age are getting vocational training at school, there appear to be few opportunities in town for disabled young adults to work.

“Couldn’t we have community groups that incorporate both those with and those without disabilities?” she said, emphasizing that she’s not looking for pity for her son, but rather acceptance of his differences.

“I think there are a lot of opportunities for highlighting everyone’s perspectives and strengths,” she said.

And there are many ways to design recreational areas that accomodate those with disabilities, according to Gustafson, who has been volunteering with Beavercreek Township to create a “universally designed recreational area” on Dayton-Xenia Road, which allows children and adults in wheelchairs and walkers to engage first-hand in experiences they usually miss, such as being in a tree house.

The new park, which is almost completed, is an example of the sort of creative thinking that municipalities need more of, Gustafson believes.

“There’s not a lot of thinking outside the box” to embrace both the able-bodied and the disabled, she believes, stating that for change to occur, “it comes down to individuals involved in decision-making” becoming more sensitized and aware.

Williamson hopes that the film and panel discussion on Saturday help people understand more deeply what it’s like to live with a disability, and therefore dispel some people’s fears and ignorance.

“Do we let disabilities be walls that keep people in or out?” she said. “Or do we try to reach out?”