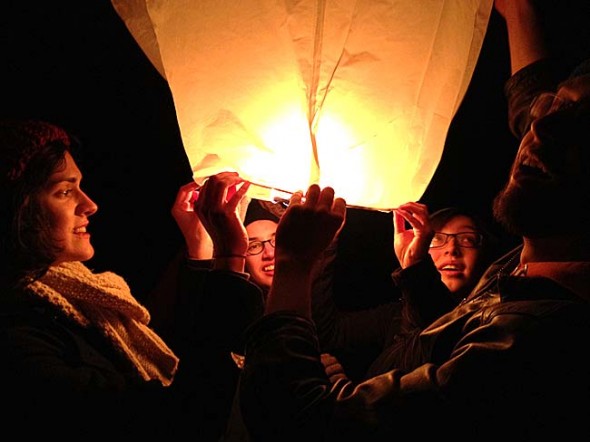 In March about 40 Antioch College students launched their “intentions”— inscriptions of their hopes and wishes on paper hot air balloons — before leaving for their first co-op term the following day. Pictured from left are Elaine Bell, Kijin Higashibaba, Cleo Van der Veen and Gabe Amrhein, about to release their balloon. (Photo by Matt Minde)

The college raised a record $19 million during its fiscal year 2012–13 for a total of $50 million since it became independent from Antioch University. The Morgan Family Foundation was one major source, pledging $2.875 million over three years. In the two previous years the college raised $13 million and $9 million, according to tax documents.

Brian Williams was named the new vice president of advancement in July and was tasked with helping the college reach a yet-to-be determined fundraising goal in the range of $75 million over the next few years, money Antioch would use for operations, campus improvements, student scholarships and faculty salaries. The college’s annual operating costs are about $12 million and are projected to grow to $15 in two years, according to Antioch President Mark Roosevelt in May, and its endowment is at $44 million.

Construction started over the summer on a new $7.2 million Health and Wellness Center located in the former Curl Gym. The 44,000 square foot facility will include a fully-equipped fitness center, racquetball courts, multi-purpose studio spaces, a regulation-size indoor swimming pool, basketball court, snack bar and locker rooms. It’s projected to open in June 2014 and be competitive in fees to area YMCAs.

A $1.2 million renovation to the theater building also began this year.

Five Antioch students were allowed to continue taking summer classes three days into the session after an agreement was worked out in July between students and administrators over overdue room and board fees, the first significant student protest at the revived college. The agreement followed a late-night meeting attended by 69 of the 96 students on campus, who rallied behind a handful of students burdened with mounting debts from fees — about $8,800 per term before need-based discounts.The agreement extended the deadline to arrange payment and included other to promote financial literacy among students.

The size of the Antioch student body doubled in October when 97 new students arrived on campus as the third incoming class since the college reopened in 2011. The first-year students said in interviews that the free tuition scholarship, the small town of Yellow Springs and the opportunity to help rebuild a college attracted them to Antioch.

Peer reviewers from the North Central Association Higher Learning Commission — who could recommend Antioch as a candidate for accreditation — visited campus over three days in November to see the college’s progress since reopening. After losing accreditation when it closed in 2008, Antioch College is now undertaking a multi-phase, multi-year process to become accredited. The Higher Learning Commission board is expected to decide on Antioch’s candidacy in June 2014.

On its way to becoming a carbon neutral campus, Antioch broke ground on a central geothermal heating and cooling plant in November. The $8.8 million closed-loop system is projected to save the college $400,000 in annual energy costs. During the project’s first phase, 150 geothermal wells were dug 300 feet deep under about three acres of the 35-acre parcel on the southern end of campus known as the “golf course.”

In April, Antioch University Midwest and Antioch College collaborated on an education conference, “Safe School Climate: Making the Invisible Visible” which explored topics like how technology affects students and creating safe, healthy schools. The event was significant as the first collaboration between Antioch College and Antioch University since the college gained its independence from the university in 2009.

After a two-year contract negotiation between Antioch University Midwest and its 13-member union staff, in April AUM gave the union a deadline to accept its best final offer. While the union accepted AUM’s offer by the deadline, the union planned to present their case to the National Labor Relations Board, members said in a later interview.

Antioch University hired Dr. Karen Schuster Webb as the new president of Antioch University Midwest in September. Dr. Webb was to serve as provost and vice president of academic affairs of the school starting in November and will formally assume the presidency on Jan. 1, 2014. In an interview, Webb said that AU Midwest’s mission of broadening access to education was one reason she wanted the job.

According to the AU press release, Webb has published widely in the fields of urban education and teaching, bilingual education and speaking and writing.

In June Antioch University named Iris Weisman, Ed.D., the vice chancellor for academic affairs, a position held by Dr. Laurien Alexandre, Ph.D. for the last seven years. Weisman has worked at Antioch University Midwest since 1998. Alexandre went on to become the full-time executive director of the Ph.D. in Leadership and Change program, which she helped design and implement in 1999.

In another leadership change, in the summer AU Board of Governors Vice President Howard Coleman of Seattle, took over as that body’s president, replacing Art Zuckerman, who presided over the board’s closing of Antioch College.

The recognition came after several years of instability at the university, sparked partly by the recession and partly by the financial burden of operating Antioch College, according to AU Chancellor Felice Nudelman in an interview.

According to Nudelman, in the most recent fiscal year the university brought in $70 million in net revenue, and now has more than $22 million in reserves, along with a $7 million endowment.

Antioch University took a leadership role in a national conference on educational innovation in July, which was funded by the Bill and Melinda Gates Foundation.

AU was invited to take part in the conference as a “coach,” as the university has been an early adaptor of MOOCS, or massive open online courses. AU was the first university in the country to offer college credit for MOOCs, after signing a contract with Coursera, a company that offers courses taught by professors in top universities.

After three years of hard work on a self evaluation, Antioch University received news in December that it is fully reaccredited with the Higher Learning Commission of the North Central Association of Colleges and Schools. While university leaders were confident that the accreditation that first Antioch College, and later the university, has maintained since 1927 would be renewed at the regular 10-year interval, they are glad the work is complete, Nudelman said.