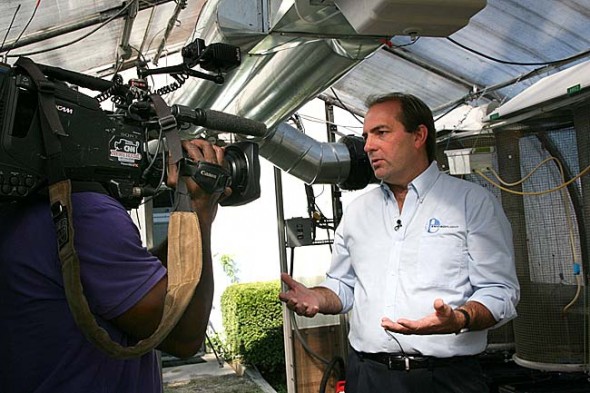 Glen Courtright, founder of EnviroFlight, and Antioch College leaders announced last weekend that Enviroflight will house its aquaculture research component at the college’s former art building, if the college is awarded $600,000 of state funding. Courtright is shown here last fall with a cameraman from CNN. (News Archive photo by Suzanne Szempruch)

Antioch College and the local sustainable animal feed business EnviroFlight are poised to collaborate in a way that leaders believe will benefit both entities.

“We believe this fits well with what you’re doing,” EnviroFlight founder Glen Court­right said to the Antioch College Board of Trustees at an open portion of the board’s meeting last Saturday at Herndon Gallery. “We want to collaborate to create a framework for affordable, sustainable socially responsible food production.”

Specifically, the college will offer EnviroFlight use of its former arts building, where the five-year-old animal feed company will conduct aquaculture research.

However, the collaboration is dependent on the college receiving a $600,000 state grant that will pay for refurbishing the building, according to College Vice President for Administration and Finance Andi Adkins. If the grant comes through, Enviro­Flight will use the building, and if the college doesn’t win the grant, EnviroFlight will seek another venue for its aquaculture research, Courtright said in an interview this week.

“We want to establish a sustainable nutrient research facility at Antioch College using EnviroFlight technology and processes,” he said to the trustees on Saturday.

The arrangement would involve EnviroFlight using the 24,000 square foot building for its aquaculture research, in return for which the college will receive, according to Courtright’s presentation, “global visibility,” opportunities for student co-ops, a user for the building and free fish to feed the students. The college would provide building maintenance, and the two entities will negotiate on the issue of rent in the future, Courtright said this week.

The college would also receive a cost-free opportunity to refurbish the building, a project estimated to cost about $450,000 to $550,000, which would be covered by the $600,000 grant from the Ohio Capital Appropriations bill. The college will apply for the grant, with help from EnviroFlight and the Greene County Economic Development office, in February, and should learn the outcome in about six months, according to Courtright.

However, the main part of the Enviro­Flight business, which includes the production of black soldier fly insect larvae, will remain at its current location at MillWorks, according to Courtright, who said the business, which currently employs 10 people, will soon need a larger facility in which to grow. In an interview this week, Courtright said he is exploring renting a larger space at the Creative Memories building, and his need to move fairly quickly precludes the option of building a new building.

Begun five years ago, EnviroFlight bills itself as a new technology to address the twin world problems of world hunger and sustainability. Specifically, the company uses waste products from breweries, ethanol production and pre-consumer food waste to feed black soldier fly larvae. The flies produce waste that is then turned into high-protein, low-fat food for fish and livestock, after which the larvae are cooked and dried to create a high-protein, high fat food for carniverous fish, according to the EnviroFlight Web site.

“We can create proteins and fats at a lower price than what’s on the market,” Courtright said to the Antioch College trustees on Saturday.

And while the company plans to keep its main operations at its current location at MillWorks for the short term, the high ceilings and extensive light of the atrium area of the former art building provide a perfect space to raise rainbow trout, which the company will use for research, and then give to the college.

“We have to do a lot of aquaculture research to prove that what we do is safe,” Courtright said.

The company did recently receive approval from the FDA “to market for human food use the edible tissues derived from experimental animals reared on insect meal and other ingredients that are acceptable for use in animal feed,” according to an email from Courtright this week.

In his presentation to the college trustees, Courtright said the company has been selected to join a global team of public and private organizations to develop sustainable tools for food and feed in Kenya. The project, funded by the Danish International Development Agency, or DANIDA, will involve bringing a Kenyan Ph.D. student to Yellow Springs to learn how to adapt the EnviroFlight process for Kenyan food needs, according to a company press release.

Courtright stated he wants to keep his company in Yellow Springs. “We want to keep things here,” he said. “It’s where the brain trust is.”

• Also at the board meeting, College Vice-President for Advancement Brian Williams, who heads the college fund-raising efforts, spoke of the financial challenges facing the college.

Specifically, the college’s $75 million capital campaign faces a significant shortfall due to a lack of very large gifts — those from $1 million to $15 million. College fund-raisers structured the campaign in the shape of a “pyramid” with a wide base of smaller donations at the bottom, but at the top a single gift of $15 million, one gift of $7.5 million, two gifts of $5 million, four of $2.5 million and eight of $1 million. And those more than $1 million gifts haven’t come in, according to Williams.

“We’re working hard to identify those people,” he said. “Those gifts take a while to mature.”

“The challenge is identifying and securing the donors at the top of the gift pyramid,” he said.

No rest for the gritty

At the college’s State of the College speech the preceeding afternoon, College President Mark Roosevelt also emphasized the college’s fundraising challenge. While last year Antioch raised $19 to $20 million, the highest amount ever raised in college history, the need remains huge, since the estimated cost of renovating the college’s long neglected campus turned out to be only one-third of the actual costs, according to Roosevelt.

“We had substantial growth with fundraising, but we need to be doing this every year,” he said.

The planned campus renovation does not include “bells and whistles,” Roosevelt said, only a “decent, clean, functional” campus for students.

But Roosevelt had significant good news, as well. Currently, the college has enrolled 184 students, and 63 are on co-op placements.

“Don’t underestimate how hard it is to reestablish co-op in this economy,” he said, giving credit to the school’s co-op department.

The college currently offers 65 courses, with an average of 10 students per class. And the Antioch retention rate is about 88 to 89 percent annually, comparable to that of other Great Lakes Colleges Association schools, he said. Roosevelt also said that he feels hopeful about last fall’s on-site visit by a Higher Learning Commission accreditation team, although the official HLC announcement as to whether the college meets the requirements for accreditation candidacy won’t be made until June. Town/gown collaboration is also going well, he said, with the wellness center expected to open in June, and a theater building renovation in progress.

Overall, Roosevelt emphasized, the college has overcome huge obstacles and has much to celebrate.

“No one could have predicted three and a half years ago that the college would be on such sound footing as we are,” he said.

But the challenges remain, including the need to keep hard-working staff, faculty and students from burning out, according to Roosevelt, who said the name of his speech was, “No rest for the gritty.”

“We’ve done an incredible amount of work, and have asked a great deal of faculty and staff. You can see some wear and tear,” Roosevelt said, stating that “We have to learn to produce human sustainability alongside economic and environmental sustainability.”