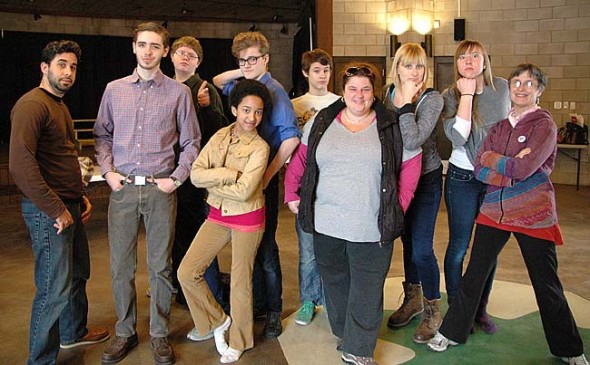 ‘Godzilla’ takes to the stage with a comic twist

A 500-foot fire-breathing monster rises from the sea and tromps around with no regard for human life.

That’s the gist of pretty much every Godzilla film, as well as the plot of an upcoming local production, according to the play’s writer and director, Corrie Van Ausdal. Only this time, GODZILLA! is a clever comedy with pop music, striking shadow play, live sound effects and a cast of five talented local teens.

GODZILLA!, an original musical parody, opens at the Glen Helen Auditorium on Friday, Feb. 8, at 7 p.m. and continues Feb. 9 at 3 p.m. and on the following weekend, Friday, Feb. 14, at 7 p.m. and Saturday, Feb. 15, with performances at 7 and 10 p.m. The show is funded in part by a YS Community Foundation grant and produced by Yellow Springs Kids Playhouse as part of its 20th anniversary season.

Since the giant radioactive reptilian monster debuted in the 1954 classic Japanese film that bears his name, Godzilla has appeared in 28 movies and has become a pop culture icon. Variously a symbol of nuclear weapons, war, technology, genetic engineering and industrial pollution, Godzilla has been reinterpreted by different cultures at different times, according to local Godzilla enthusiast Zane Reichert, who is also the play’s set designer. GODZILLA! stays true to the original story while updating it for today’s audiences, he said.

In her first local production since returning to her hometown in 2012, Van Ausdal addresses themes in GODZILLA! such as religion, politics, power structure and love — “human constructs that mean nothing to the beast,” she said. At the same time Van Ausdal made her show global in scope, humorous, fast-paced (the show lasts just one hour), and filled with familiar tunes, including Tom Lehrer’s satirical “Who’s Next?” about nuclear proliferation, the Rolling Stones’ “Sympathy for the Devil,” plus an original ballad written by actor Blaze Wright which “everyone will be singing,” Van Ausdal said.

And while Godzilla has been variously portrayed in film using everything from computer-generated effects and animatronic and stop-motion action to an actor dressed up in a latex costume, Van Ausdal’s version gets a more artistic and minimalist treatment with the use of shadow puppetry in the spirit of traditional Japanese theater, according to Reichert. The production is sure to pack a punch, with a surprise one-night only “celebrity” guest for each performance, room for improvisation, and “elemental” techiques, which is just the way Van Ausdal likes it.

“I like the kind of theater where it’s elemental, where I feel if everything else gets stripped away, the essence doesn’t get stripped off,” she said.

Because of scary themes, GODZILLA!, is deemed appropriate for audiences aged six and older.

Originally written for a cast of 75 teens at the 2013 Friends Music Camp, where Van Ausdal teaches, GODZILLA! was adapted for a cast of just five, which means multiple roles and constant wardrobe changes for the young actors. But it’s not something the talented group can’t handle. GODZILLA!’s cast includes two local campers from that production, Blaze Wright, 17, and Jeremiah Scott, 16, as well as Sumayah Chappelle, 11, Bear Wright, 15, and Duard Headley, 14.

Chappelle, who plays a “newslady,” president and radar operator, among other roles, said the audience will be amazed at what a small cast can do with Van Ausdal’s comedic and poignant material. And while the play is basically “about monsters,” it has deeper messages.

“It’s a comedy but it’s also sad,” Chappelle said. “Everyone is living their life, doing their own thing, when all of a sudden a prehistoric dinosaur foot steps on them.”

YSKP was excited to produce GODZILLA! as part of its mission to support emerging artists in Yellow Springs, according to YSKP artistic director John Fleming. It also fits within the YSKP canon of original shows.

“It’s a charming original production that features media and live music and in this way it fits in perfectly with our longtime aesthetic,” Fleming said.

Van Ausdal, 36, grew up doing theater in Yellow Springs before living as an actor and playwright in Kansas City, Mo., where she made a name for herself performing at the Late Night Theater and the Fishtank Theater, which she opened with a friend. The daughter of retired local physician Dr. Paul Van Ausdal and the local musician, playwright and storyteller Carolion, who died in 2009, Van Ausdal grew up so immersed in theater she arrived at college thinking everyone had theater experience, an attitude she attributes to her Yellow Springs upbringing.

“Yellow Springs kids all just do a lot of different things — you don’t have to just specialize,” Van Ausdal said. “So all my friends did music, theater, sports — it was really cool.”

Van Ausdal joined an improv troupe that traveled and performed regularly before moving to Kansas City to work as a serious actor while also running an undergarment store. Van Ausdal returned to the village with her husband, Matthew Collins, to raise their two young children here, a move that several other Yellow Springs High School Class of 1995 alumni have made in recent years. She works as a bookkeeper in Dayton while continuing to work on plays on the side, with hopes of starting a series of theatrical readings in people’s living rooms.

“It could be a lot of fun for adults who did theater when they were young but haven’t done anything in a while,” Van Ausdal said of the idea.