This is the first in a series of three articles examining the state of local businesses.

The Village may have suffered a slight downturn in income tax revenue during the four-year recession, but local businesses appear to be recovering and returning the Village to pre-2009 tax revenue levels, according to data from the Regional Income Tax Agency, or RITA. Activity in the fields of healthcare and research and production are especially prevalent in Yellow Springs’ economic landscape, and while some local businesses have left the village or declined, others are finding it possible to expand again and appear to be recovering their own losses. 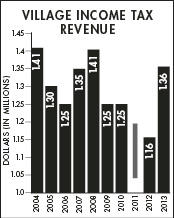 Data courtesy of RITA
The Village’s annual income tax revenue, provided by the Regional Income Tax Agency, dipped during the recession but showed signs of recovering this year.

Income taxes collected by the Village at a rate of 1.5 percent on both individuals and business profits are the single largest source of Village revenues, providing about 50 percent of the Village’s general fund. Over the past 10 years, the total tax revenue from both residents and businesses has fluctuated between a high of $1.41 million in 2004 and a low $1.16 million in 2012. This year’s tax revenue of $1.36 million is approaching the Village’s pre-recession income of $1.4 million.

With steady growth expected for two of the largest tax contributors, YSI Incorporated and Antioch College, the Village is aimed at returning to the $1.5 million in annual income taxes received before Vernay Laboratories, Inc., closed its main manufacturing facility in 2003, and Creative Memories relocated its scrapbooking operation in 2012.

While the forward momentum is a positive sign, according to Village Council President Karen Wintrow in an interview this week, the overall picture is that income taxes have been stagnant at best over the past decade. The Village has managed to maintain its current level of solvency due to the property tax villagers passed in 2006 and the village’s “decent diversity of jobs,” including all the schools and businesses such as Friends Care Community. But considering inflation, the Village will need to make significant gains to return to its former level of economic stability.

“If we don’t start adding jobs to have the income taxes help fund Village projects, then the only other resource is property taxes,” Wintrow said this week. Existing business “alone is not doing it at this point.”

According to a list of the top 25 tax contributors that RITA gives the Village each month, for the past five years YSI Incorporated, now a Xylem brand, has generated far and away more income and business profit taxes to the Village than any other organization. Antioch University has remained the next strongest contributor, followed this year by Antioch College, whose budget has grown each year since reopening in 2010. The education sector continues to top the list with Yellow Springs Exempted Village School District and the Greene County Educational Service Center falling in close behind.

YSI has been on a growth path since being purchased by Xylem in 2011. According to YSI President Ron Geis, the company acquired three new brands last year and intends to invest this year in research and development, marketing and manufacturing to accommodate an increase in volume of its “core product lines” and the Waterlog brand, according to Geis.

“The YSI (Yellow Springs) budget continues to grow year over year since the acquisition in 2011,” he wrote in an email last week.

Last year YSI paid about $122,000 in net profit taxes to the village. Though YSI did not pay any taxes on profits in 2012, last year’s gains were up significantly from the previous four years.

In income tax figures last year YSI’s 197 local employees paid over $157,000 to the village. Over the past two years the company has increased its personnel (about 10 percent of whom live in Yellow Springs) by about 30 people who work in sales, customer service, engineering, assembly and administration at the Brannum Lane facility. YSI also has immediate plans to add a second shift of three production workers to its force, according to Ritu Jian, the company’s human resources spokesperson.

On the education front, Antioch University and the public school district have remained relatively steady, while both Antioch College and the Greene County ESC have experienced an uptick in activity.

The university suffered a slight reduction in its workforce about three years ago at the Midwest campus, which hasn’t recovered, according to AU spokesperson Matt Cookson. Currently Midwest employs a total of 30 full-time faculty and union staff members, in addition to about 50 part-time adjunct faculty and 20 work study students. The university headquarters across the street which supports five branch campuses around the country has remained steady with 41 employees and a $73.5 million budget, Cookson said. Together, their employees paid $104,000 in income taxes to Village coffers last year, just slightly higher than the previous year.

Revenue from Antioch College, on the other hand, shows steady growth each year since it reopened. In its fourth year of operation with three classes of students on campus, the college paid $76,000 in income taxes in 2013. That represents a current 119 employees, including 26 faculty members and the staff at WYSO and Glen Helen. With an operating budget of $15 million, up from $13 million last year, the college’s path to growth includes plans to hire 10 more faculty and eight new staff members this year to accommodate a projected student body of about 250 by the fall, according to spokesperson Dan Doron. The college hopes to continue to grow by about 80–100 students per year to achieve a total enrollment between 350 and 380 students on campus by 2017. The increased student numbers will mean more staff, as well as new revenue that will come from transitioning the Horace Mann Fellowship tuition-free program into a need-based tuition program that “will still be accessible to the poorest qualified students,” Doron said.

The Yellow Springs schools have maintained a steady operation, losing just three or four positions during the recession for a total staff of 84 this year, according to District Assistant Treasurer Eva Anderson. The schools provided $72,000 to the Village in income taxes last year.

The Greene County ESC, which provides therapeutic and learning services to school districts, has seen significant change in its employee numbers since the recession began, according to Vice Principal Terry Strieter. The school went from a staff of 190 teachers, therapists and support staff four years ago to a reduced team of about 146, which has since recovered somewhat to about 156 employees this year. The school, whose income tax contribution comes from staff members who work in Yellow Springs only, paid $41,000 in income taxes to the Village last year.

In addition to the major educational institutions, Yellow Springs also supports Miami Valley Educational Computer Association, or MVECA, which provides IT support services and is housed at the ESC, and paid almost $9,000 in income taxes last year. In addition, Central State University’s 11 employees who live in Yellow Springs paid just over $7,000 in income taxes to the Village because Wilberforce does not have an income tax.

Electroshield is one business that has fully recovered its gross revenue of four years ago, when business went “way down,’” according to business manager Nick Eastman. Though Electroshield managed to keep all of its 17 sales, warehouse, purchasing and IT employees, the business suffered until last year, when increased orders prompted discussion about possibly hiring more people or looking for additional storage space in Yellow Springs. The business contributed $26,000 to the Village last year.

Friends Care Community cut about 25 staff members six years ago and due to the economy as well as dynamics of the industry itself, has remained at a reduced staff of 75 administrators, nurses, aides and facilities staff, according to Executive Director Karl Zalar. Those employees, who care for residents in the center’s 78 long-term care, assisted living and rehabilitation units, paid $34,000 in Village income taxes last year.

“The industry is being pushed to do more with less, so we’re consolidating positions,” he said. “We’re not growing from a staffing standpoint…[though] there might be an opportunity to increase through raises.”

Next week, the News will cover smaller businesses on the RITA list of top 25 income tax producers.