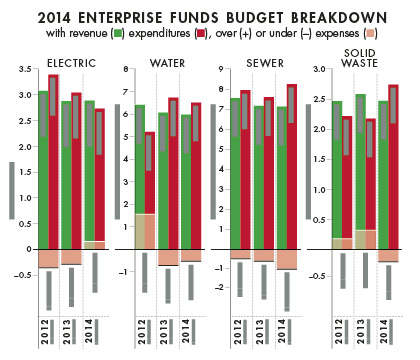 At their Feb. 3 meeting, Village Council members heard that, in the projected 2014 Village budget, most of the Village enterprise (or utility) funds — the water fund, sewer fund and solid waste funds — show deficit spending.

“Three out of four funds have seen declining revenues and flat or rising expenditures,” according to Village Finance Director Melissa Vanzant.

The discussion about enterprise funds was part of Council’s review of the 2014 Village budget that began in January. Council reviewed numbers for the Village general fund at a special 6 p.m. meeting before the Feb. 18 regular meeting, and will look at capital needs at a special meeting Feb. 24. Council will vote on the 2014 budget on March 3 and March 17. Vanzant, who recently replaced former Finance Director Sharon Potter, presented the budget figures.

Council in 2010 approved a sequenced five-year water rate hike, but the increase has proved insufficient. At the Feb. 3 meeting, Council President Karen Wintrow encouraged Council to increase rates before making a decision regarding water sourcing.

“We need to get something in place first,” she said of a rate hike.

The healthiest Village enterprise fund is the electric fund which, according to the projected 2014 budget, will end the year with $2,877,888 in revenues and $2,755,086 in expenses, for a balance of $122,802 over expenses. The fund also has a surplus balance of about $2 million. Last year’s electric fund showed a deficit of $267,323, but that number reflects a significant amount transferred from the fund to pay off bonds from the John Bryan Center debt and replace downtown streetlights, according to Council member Lori Askeland.

“When we look at the red in the electric fund, I’m not that concerned, because they mainly reflect strategic commitments we made,” she said.

Vanzant had not included each fund’s current balance in her report, and stated she will bring that information to the next 2014 budget review.

Deficit spending is a normal part of the cycle of a utility fund, according to Interim Manager Kent Bristol, who explained that municipalities set rates that are intended to cover expenses, and as costs increase over years, the budgets will show deficit spending in the years before rates are increased again.

“Deficit spending is not inappropriate for a few years,” he said.

In other Feb. 3 Council business:

Council member Brian Housh announced a change regarding the person villagers will work with from the consulting firm Management Partners, which will oversee the search. While initially Cecil Osborne was to be the main contact person, he is not able to continue and will be replaced by Douglas Plunkett.

Housh and Council member Gerry Simms, who are working together on the manager search, presented Council with the completed manager profile brochure that is being used to publicize the search. The brochure may be seen online at http://www.managementpartners.com/images/stories/pdf/yellowsprgs_jan31_4p.pdf.

Regarding the profile, villager Carole Cobbs expressed concern at what she perceived as the lack of diversity in the profile brochure photos.

• Council’s next meeting will be a special budget meeting on Monday, Feb. 24, at 7 p.m.in Council chambers.