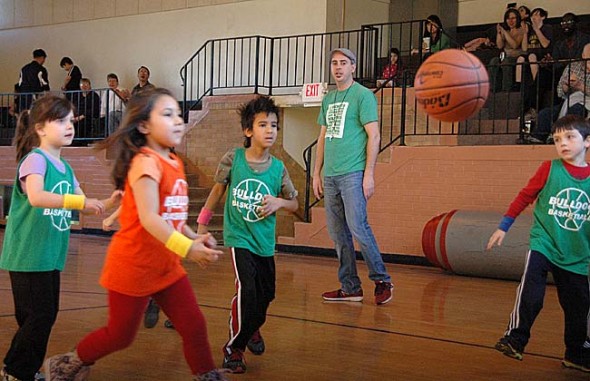 When thousands of dollars worth of basketball equipment went missing from the John Bryan Community Center last fall, the future of a longtime co-ed youth basketball league was in jeopardy.

Without basketballs, junior hoops and a scoreboard for the elementary school-aged children to use for the annual winter program, the game might have been over.

Then just in time to save the season, the Yellow Springs Police Department, the Human Relations Commission and a private donor chipped in $2,000 to replace the equipment and buy uniforms. At the same time, Mills Lawn Principal Matt Housh and a local parent, Callie Cary, stepped up to organize, parents volunteered to coach and high school students agreed to referee.

“It was a total volunteer effort,” Housh said this week.

The Yellow Springs Bulldog Youth Basketball League will end its season with an All-Star skills competition, awards ceremony and potluck breakfast from 9 to 11 a.m. Saturday, March 1, in the John Bryan Community Center gym.

Formerly known as the Junior Pro Recreation League and the Crickets, the winter intramural league is free for local first- through sixth-graders — both boys and girls. With four teams each in two age groups, some 80 to 90 local children participated this year.

Housh touted the program for helping its young players stay active during cold winter months and build life skills like teamwork, communication and “thinking on your feet.” But their growth as basketball players is astounding too, Housh said.

“The difference is huge from the first time we saw them grab a basketball to seeing them play defense and stay with their man — they learn tons,” Housh said.

For the younger age group, first through third grade, the teams don’t keep score and referees are lax on a few rules — double, triple and even quadruple-dribbling is allowed, and there’s a good deal of traveling, which Housh said is “so they can just learn the game and learn to love the game.”

Meanwhile, in the older age group, fourth through sixth grade, the competition can get intense. One game came down to a shot at the buzzer and a final score of 44–42, which is high scoring for that age group. Teams in both age groups have one practice each week and a game on Saturday.

Former Yellow Springs High School boys varsity basketball coach Brad Newsome organized the Junior Pro Recreation League in 2009 and modeled it after the youth basketball programs he participated in as a kid growing up in Yellow Springs in the late 1970s. During his time, Newsome saw the league’s benefits accrue not just to the players, but also to the basketball teams at the high school, who have to compete with neighboring districts that start training their youth early.

When Newsome stepped down as the YSHS coach last year, he passed the league onto Cary and Housh, who later discovered that the supply of equipment Newsome had built up over the years and, in Newsome’s words, “after much time and effort,” disappeared. It’s unknown whether the equipment was stolen, lost, or thrown away. Police Chief Anthony Pettiford said this week that the case remains unsolved.

When approached, the police department donated money from its forfeiture fund, and the Human Relations Commission, which is funded by the Village, gave money for the program to continue. The Village also donates the gym space at the John Bryan Community Center. While the league is not an official Village of Yellow Springs program, Housh hopes that someday the Village might consider running it.

This Saturday’s All-Star skills competition will include a three-point shooting contest, a layup challenge and a dribbling race, with prizes awarded to the winners. In addition, all league participants will get an award for their commitment. There is no league champion because there are no team records.

Even without winners and losers, from what he has seen, the league has meant a lot to local youth, Housh said.

“You can tell that the kids are engaged, they are taking it seriously and it’s important to them.”