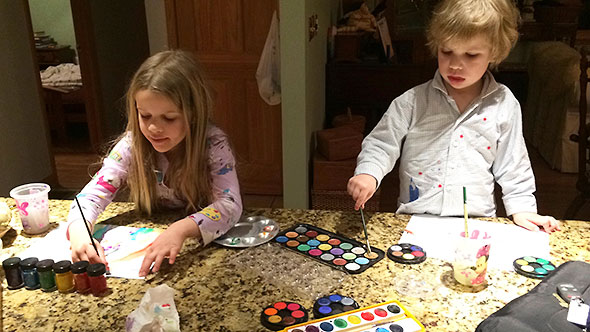 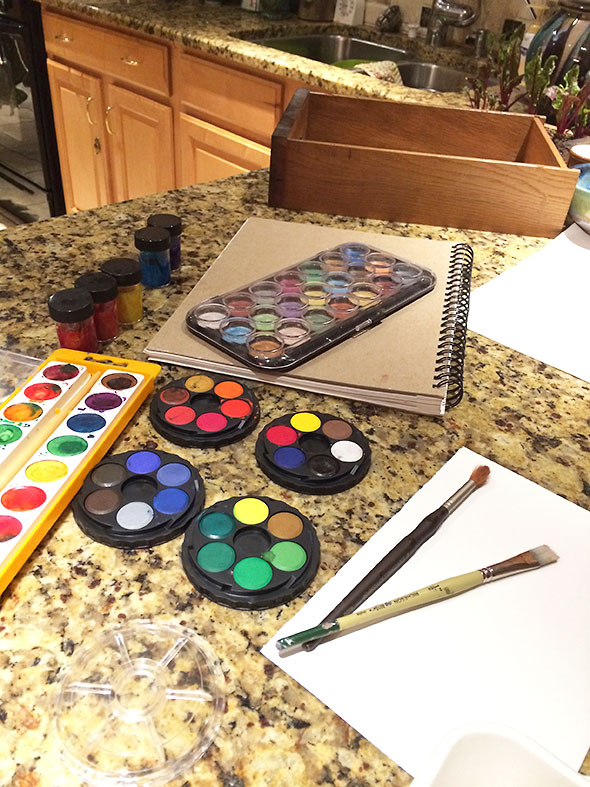 Monday I returned from my evening ballet class in time to take over the children’s bedtime ritual from my husband. He had things well in hand when I arrived. The house was dark and silent. The children were dressed in pajamas and tucked under covers. My husband was dressed for a game of indoor soccer. He was headed out for an evening match at the SportPlex in Fairborn. He passed me a dinner plate and, with a decided air of confidence in the state of home matters, quit the house for some much appreciated exercise.

No sooner had his car left the driveway then my daughter materialized from the children’s bedroom. Without preamble, she announced, “I want to paint a picture.” and withdrew a large drawing pad from among her coloring books. She pulled letter-sized sheet of paper from her drawing pad, extracting it carefully by folding it along the perforation as her father had previously instructed her and then working the tear from both edges to meet in the middle of the seam. She handed me my own half-sheet and looked at me expectantly. I hesitated, I did. After all, the time was 8:45 PM on a school night. Still, I said “Okay” and cleared my dinner plate as I was genuinely curious at her assertive interest. 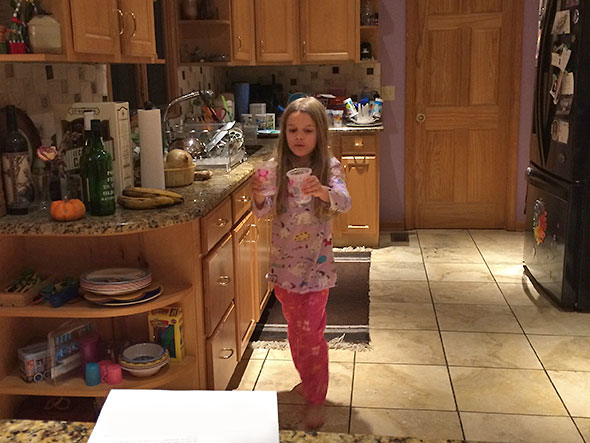 With authority, she set about the business. She climbed up on the kitchen counter at the sink and filled two cups with clear water. She set one cup before me and the other at her stool. Next, she offered me a choice of paint brushes and asked after the watercolor paints. I pointed her in the direction of her work desk, and she returned directly with its top right-hand drawer. 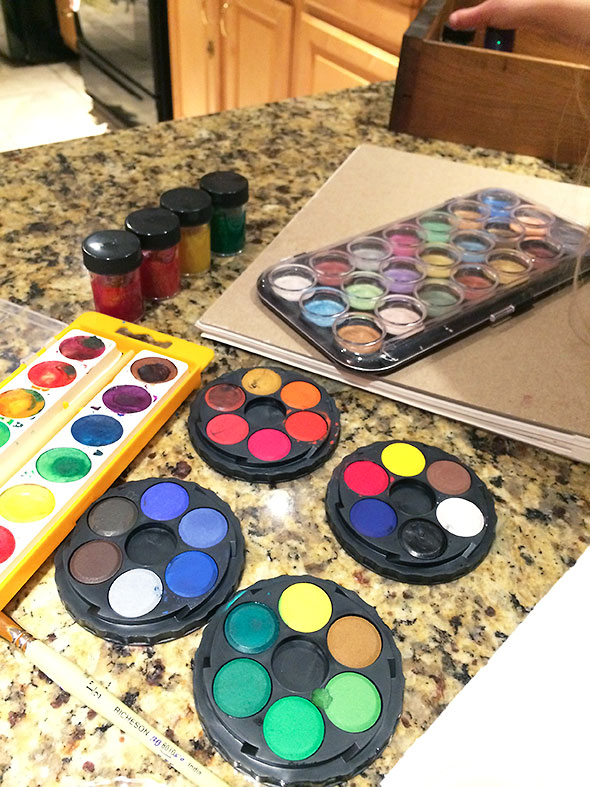 From the drawer she pulled treasure: a collection of four paint sets all from Unfinished Creations, 243 Xenia Ave. There was the classic Crayola watercolors set which held 16 ovals of paint each slightly tainted from their previous use. Two additional sets shimmered and sparkled: one tray bore 21 pearl-like circles; its glimmering hues made even the gray and beige shades enticing. The second glittery paints were individually-bottled goopy dyes. I eyed these bottles skeptically but my daughter lined them up in front of her in rainbow order—red, orange, yellow, green, blue, indigo, violet. Before me, she place the fourth and final set…a collection of brilliant matte paints stacked into a cylinder of nested trays. An ingenious set, each tray holds six colors and a central well for holding water.

With a final consultation on how much water to use, we began to paint. Holding our brushes like pencils, we each sketched out a landscape. Mine was a rolling meadow with silver-lined clouds overhead. Hers was a rainbow-formed archway under which two figures walked. She teases me into guessing their identity, offering clues, and daring me not to recognize my own image. As my hillside took shape, she pointed the location where she wanted to run and slid the pearly paint set closer that I might take her kind suggestion. 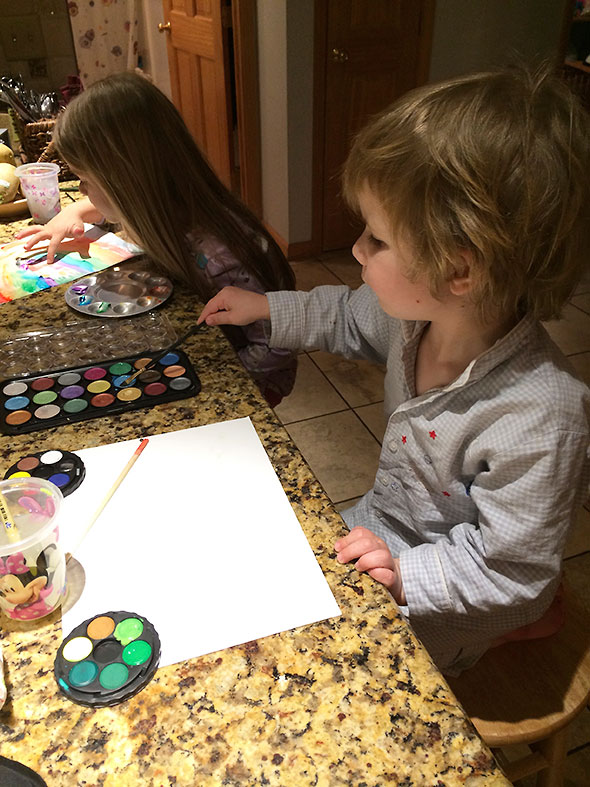 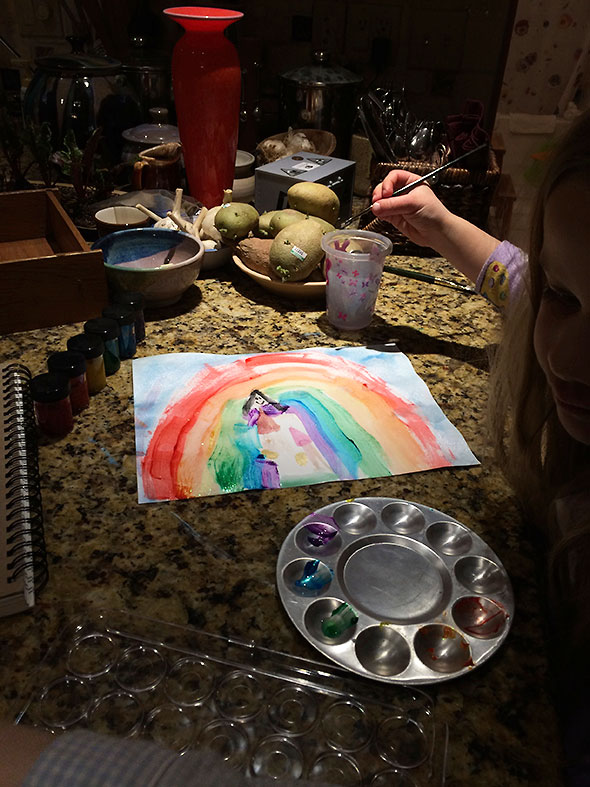 It was here that another joined us—my three-year-old padded into the room—perhaps awakened by our companionable chatter. The boy poked me in the hip indicating his wish to take his usual seat. I gave up the stool so he could climb up and join us. His interest in the paints seemed as keen as his sister’s so I promised him his own sheet of paper. Following my daughter’s directions, I removed a blank sheet from her sketch pad for him to use. 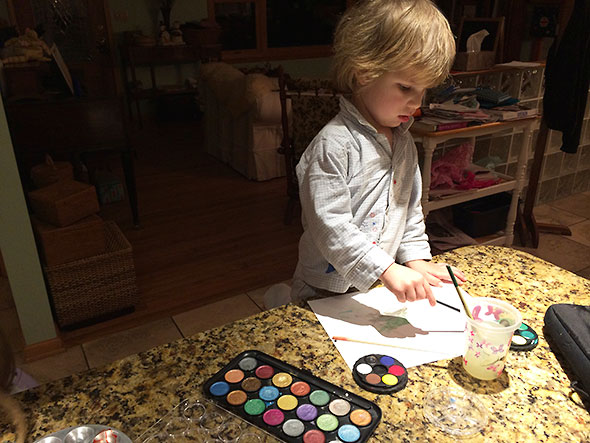 He picked up my paint brush and held it like a drumstick. For a moment, I thought he might merely beat out a rhythm but, no, he dipped the brush in a pearl gold paint and applied it to the page. Faintly at first and then with bolder strokes and colors, he worked on his picture side by side with his sister. I gave them rein. This spontaneous camaraderie was a moment of pure surprise, welcome and unexpected. Our son—a wiz at construction and recognizing numbers and letters—has resisted with his entire being two dimensional art like painting, drawing, and writing. Now, before me, was perhaps the first time that he initiated painting himself. 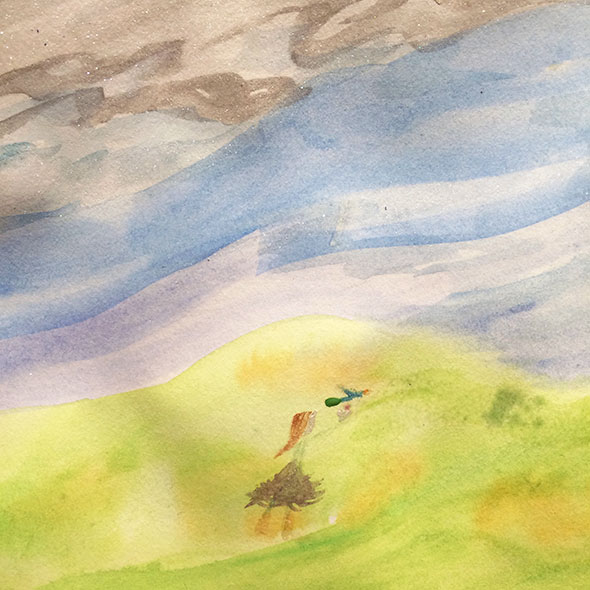 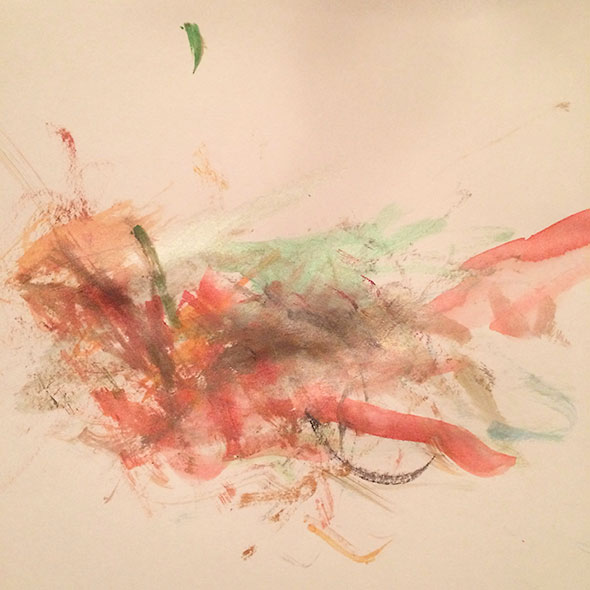 We managed to get to bed before their father returned, but I was still up and excited. Conveying the events to my husband, I told him how watching them together took me back to the the hours I’d spent with my older sister Heidi drawing shoulder to her shoulder in a sketchbook each of us on a page opposite the other. Drawing with big sister Heidi as my favorite pastime as a four-year-old, and the similarities in both my children’s ages, and the depth of their joined concentration did not escape me. The scene was a precious gift dropping out of the sky into my hands…past, present, and future joined in prescient dream…like the wind rising in an animated scene from a film by Hayao Miyazaki. Later that night with the children tucked into bed, I read an online thread among Yellow Springs families discussing proper bedtimes for children. I had the sense to feel shame at our indulgence, but the evening’s accomplishments were hard to regret.