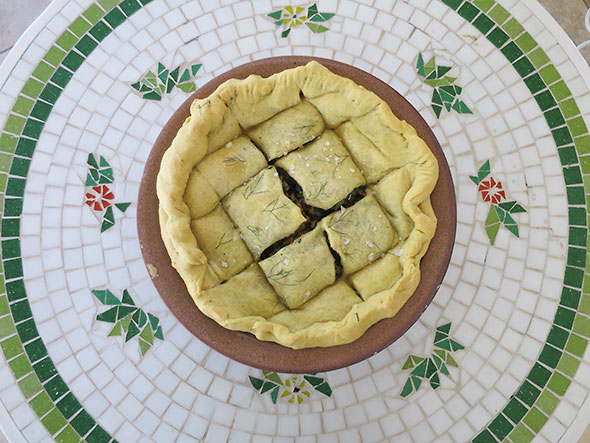 BLOG-Pie is for Pi Day

At our house, March 14th is known as Pi Day. Pi is an interesting number. It’s the constant that you get when you take the ratio of a circle’s circumference and its radius. The number is also a fine curiosity…a so-called irrational number…because its digits never fall into a predictable pattern no matter how far out its decimal places are expanded. 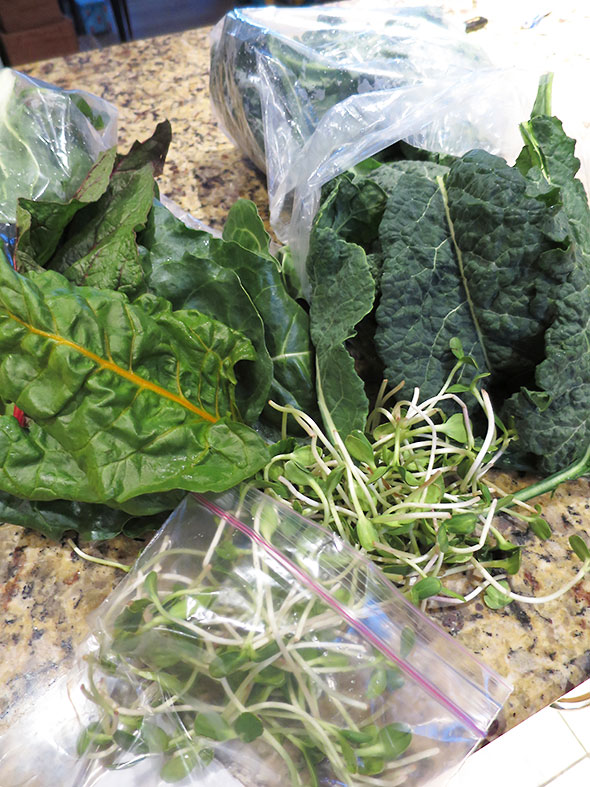 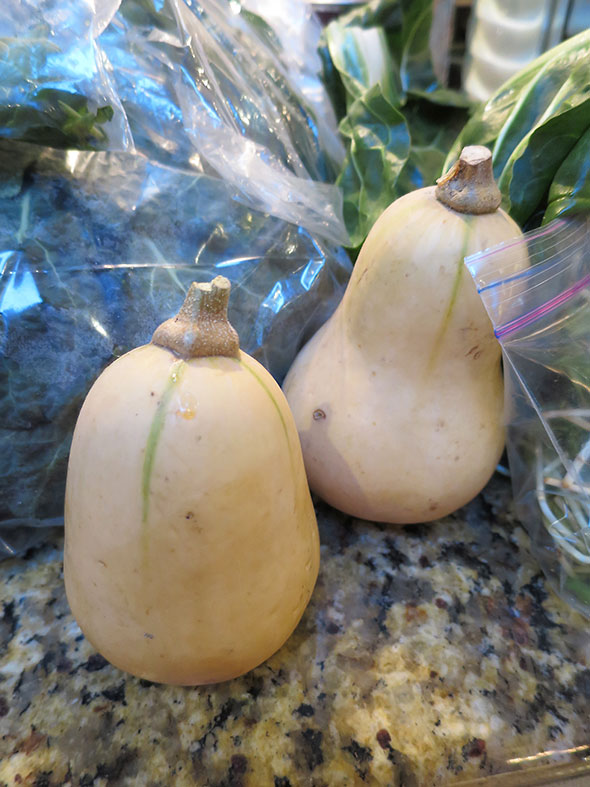 Circular, surprising, and essential, the numerical pi always makes us think of pie and we like to enjoy both sweet and savory varieties to celebrate the mathematical constant’s day. Since mid January of this year, I have been hoping to make savory pie. Real Food advocate Mark Bittman posted a video of Greek chef Diane Kochilas preparing a savory pie akin to the Greek specialty spanakopita. Greek food is one of my favorite cuisines, and Chef Kochilas’s recipe for homemade phyllo dough seemed within reach. That I might prepare such a delicacy was especially intriguing. My pantry was teasingly stocked with the necessary dry ingredient, Semolina Flour, which I use to make pastas and pizza dough. I didn’t have the pie recipe’s recommended shredded pumpkin, but I did have two small butternut squash that I could press into service. The ingredients that required some patience were the filling’s mixed greens as, due to our cold Ohio winter, local winter greens were hard to find. 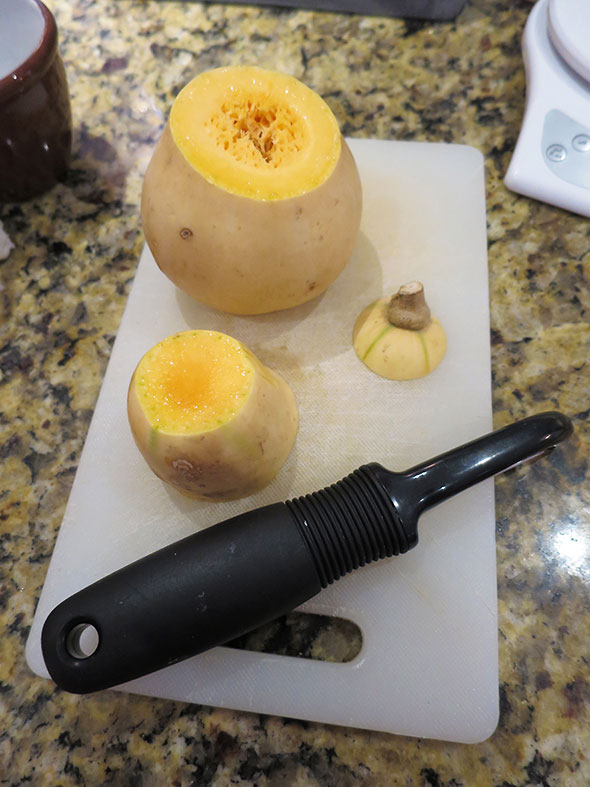 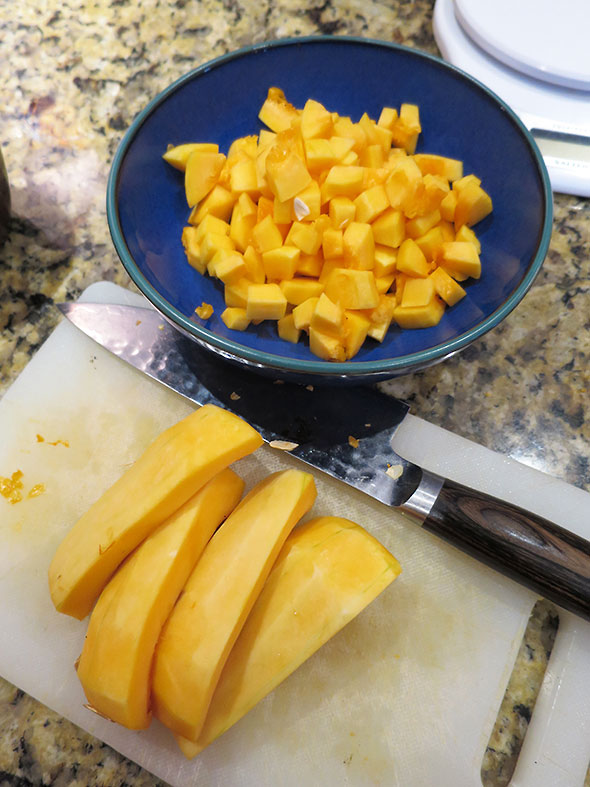 When Flying Mouse Farms announced this Thursday that they would be picking a fresh harvest of swiss chard and dinosaur kale on 3/14 at just before 2pm (marking 3/14, 1:59:26pm or 3.1415926…), I felt the time of experimentation must be at hand. 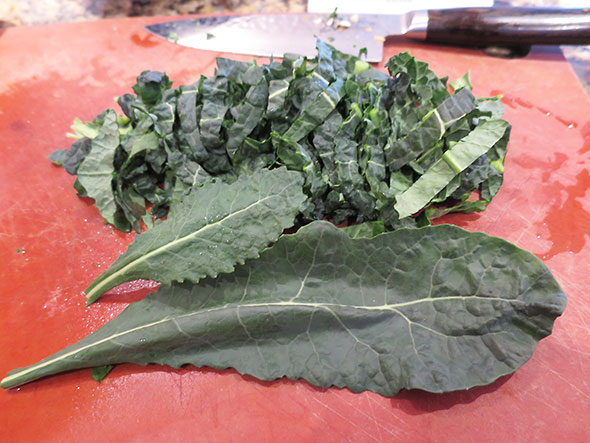 Chef Diane Kochilas’ phyllo recipe produces a dough much like pasta. The phyllo needs the same 10-12 minute kneading required of pasta as well as a 1-hour rest period between kneading and rolling out. 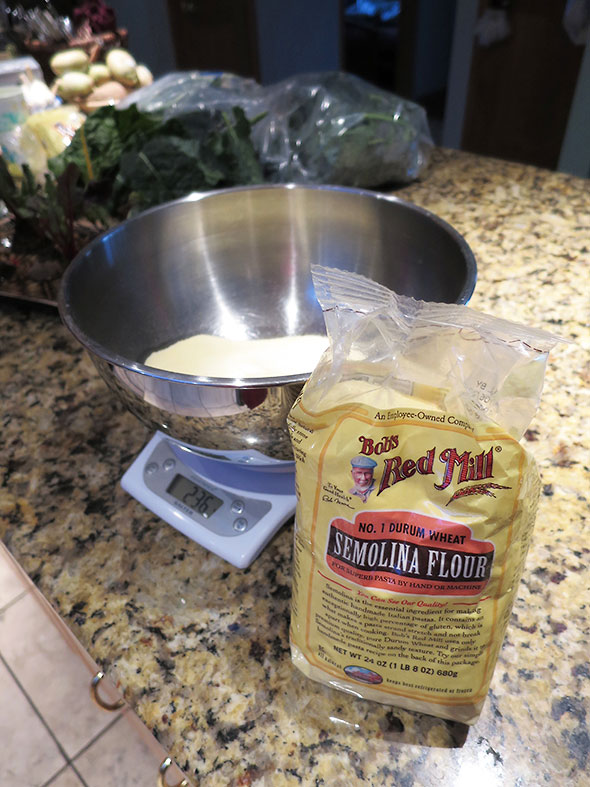 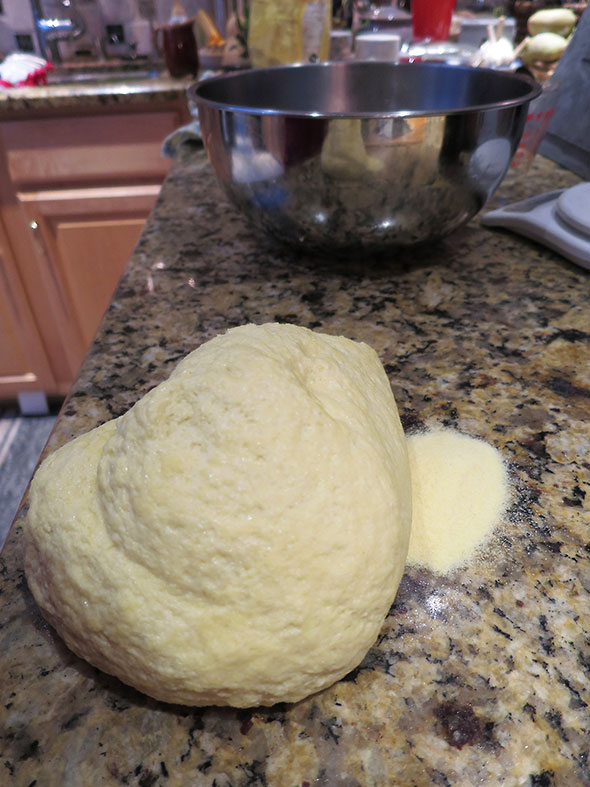 I found that the phyllo recipe produces a generous dough ball that probably best fits a small, lipped 9-inch x 13-inch sheet pan. I used a 9-inch diameter pie plate; and, by rolling out 200 gram dough balls to a translucent thinness and trimming off the excess, I had plenty of dough to layer eight sheets of phyllo—four sheets for the base crust, four for the top crust—twice as many as the savory pie recipe specified. As a result, the additional phyllo layers needed to cook longer, a full hour rather than the recommended 50 minutes. 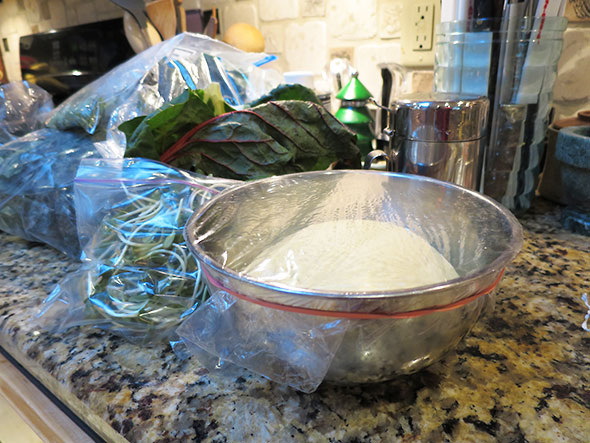 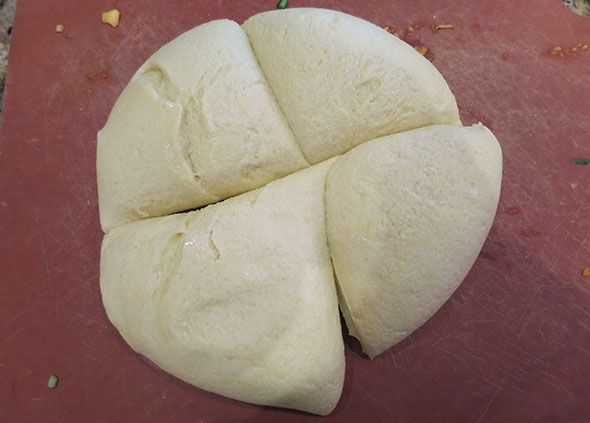 I realized early on that my pie pan would take a much smaller amount of greens than the recipe specifies, so I made only a half batch of filling using the local spinach, squash, kale, and swiss chard and adding fennel instead of dill to my collection of mint and parsley from Tom’s Market. This proved fortunately because I only heated one pan to wilt my vegetables on the stove before adding them to the pie filling. Next round I’ll know, if I want to make the full recipe, to have two large skillets fired up. 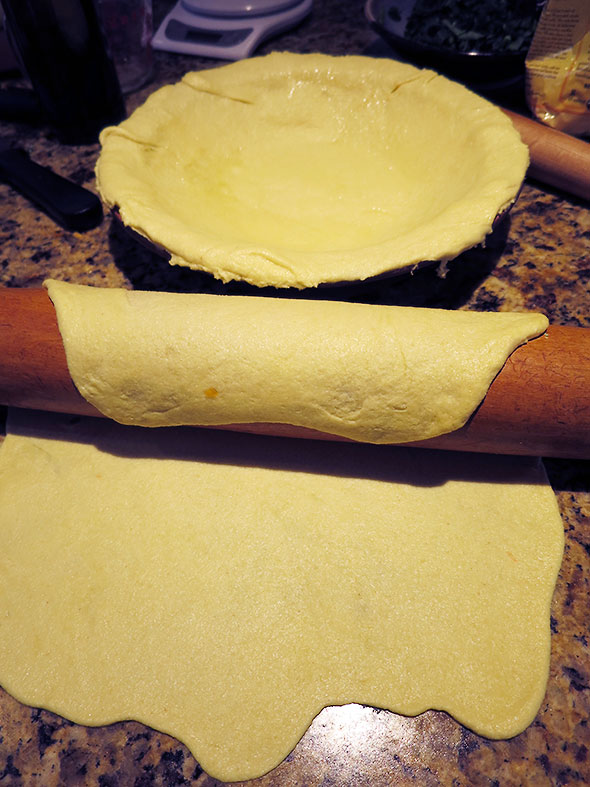 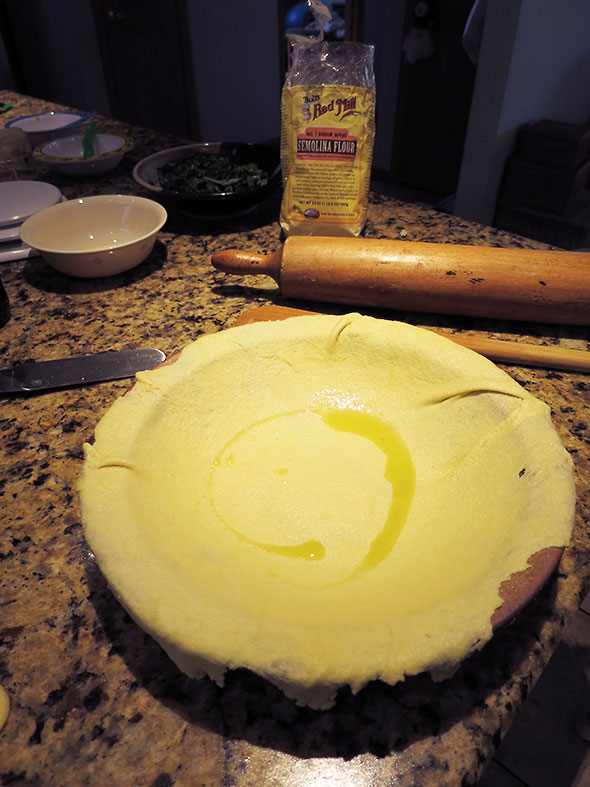 Once cooked, the homemade phyllo of the savory pie has more in common with pasta than flaky pastry. I—and more importantly my children—can live with that result, but I am also motivated to try varying the amount of semolina flour, the number of phyllo layers, and the thinness of the phyllo layers. I like that the dough has few ingredients, comes together quickly, is fairly easy to roll out, and has a lovely texture though—truth be told—one that is unexpected for “phyllo”. 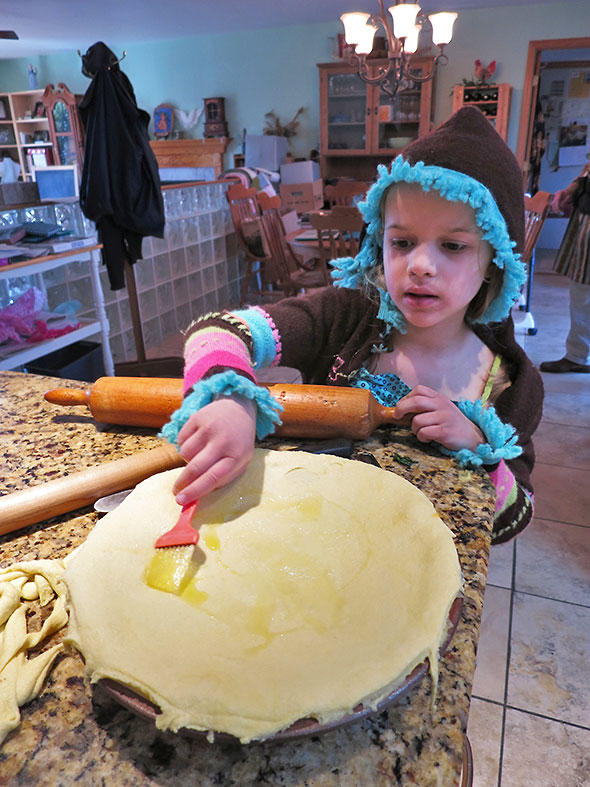 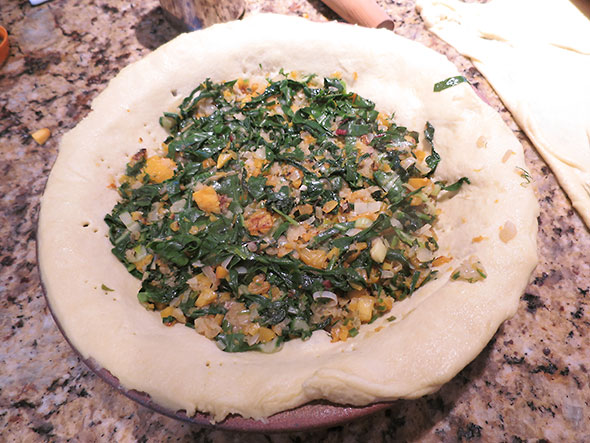 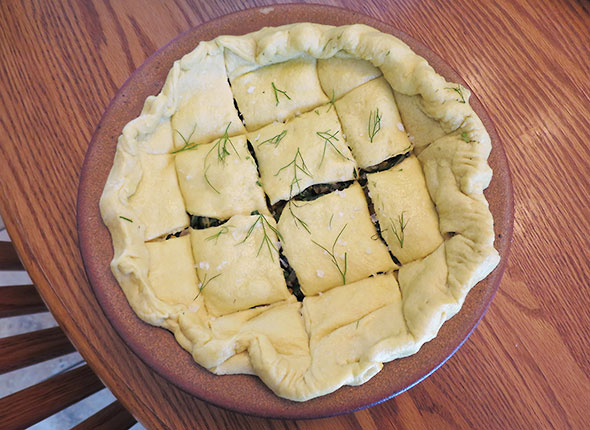 Watching my progress, my daughter was equally intrigued by the phyllo dough taking over the final preparation of the top crust from me at the end. This first experience teaches us that Chef Diane Kochilas’ hortopita recipe as written can fill two pie plates from Miami Valley Pottery. And, lucky me, I have two plates. Next time, we can make one to round out dinner and one for breakfast the next morning. Happy Pi Day, Yellow Springs.