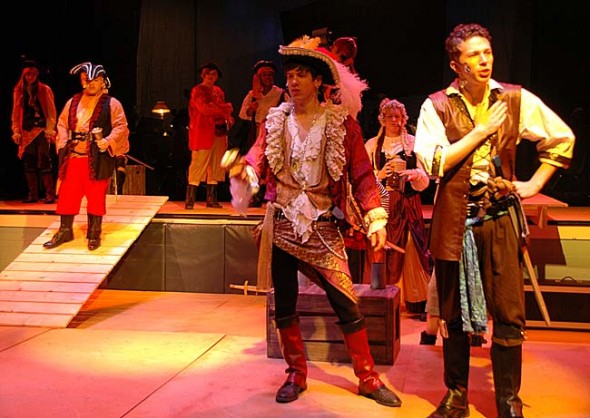 For a generation raised on the “Pirates of the Caribbean” action films, the Victorian-era comic opera “Pirates of Penzance” might seem out of date.
With operatic music, jokes that landed before the turn of the 20th century and more dance numbers than sword fights, “Pirates of Penzance” is a different kind of pirate production for these local teens. But a particularly talented group of young thespians in the Yellow Springs High School Drama Club is seizing the opportunity — and getting the jokes — according to the show’s director Cindy Lincoln.

“The kids have embraced it, and they wholeheartedly get the humor,” Lincoln said this week. And as the student actors nail the show’s comedic nuances, they are also modernizing some of its jokes themselves.

“We have interpolated the show with the latest political updates. … But I don’t want to give it away,” Lincoln teased.

Presented by the YSHS Theatre Arts Association, Gilbert and Sullivan’s “Pirates of Penzance” opens at the Mills Lawn Auditorium at 8 p.m. Friday, March 14, with other performances at 8 p.m. Saturday, March 15, and 2 p.m. Sunday, March 16, as well as the following weekend, March 21–23. Tickets cost $5 for students and seniors and $10 for adults — gold doubloons not accepted.

The traditional “Curtain Warmer” fundraiser with drinks and hors d’oeuvres is from 6 to 7:45 p.m. Saturday, March 15, at the Arthur Morgan House Bed & Breakfast. For reservations, contact Daniele Norman at daniele.norman@gmail.com or 767-8529.

One of the more popular collaborations of librettist W. S. Gilbert and composer Arthur Sullivan, “Pirates of Penzance” premiered in New York City in 1879. The show is most famous for its alliterative tune “I am the very model of a modern Major-General,” which has been referenced and parodied well into modern times.

Owing to its age, “Pirates of Penzance” is now in the public domain, which meant that money typically used for royalties could be spent jazzing up this year’s annual spring musical with a more professional lighting system, a thrust stage that puts the audience in the middle of the action and gorgeous costumes (think pirate bling, puffy sleeves and, for the female characters, loud voluminous dresses).

According to Lincoln, bringing the actors into the audience with the new thrust stage will help improve the sound in the elementary school gym, as will moving the pit orchestra to the rear of the stage. The new arrangement is an opportunity for her young actors to stretch, while it better highlights all of the show’s players, Lincoln said.

Another test for the teens has been the operatic musical style, which is why almost half of the rehearsals were dedicated to learning the songs, according to one actor. But it’s a challenge this cast has met, Lincoln said.

“The music [of Pirates] is beautiful, so I’m grateful we have the singers,” she said. “Actually, we could have done a Mozart opera with this bunch. They are legit singers and actually sound better doing opera than pop or Broadway.”

The production features more than 30 middle and high school actors and set technicians, a pit orchestra of students and adults directed by James Johnston and choreography by Valerie Blackwell-Truitt and Ali Thomas. Lincoln, a voice teacher and freelance director who lives in Yellow Springs, is participating in her third YSHS show (second as director), and is impressed by the hardworking thespians who have put together the show even when one-third of their rehearsals were canceled due to bad weather.
“This particular batch of kids, I don’t know if it’s a Yellow Springs personality, but they are last-minute geniuses,” Lincoln said.

Lincoln chose the show due to her own background as an opera singer and because she loves its signature “British humor,” she said. When the “Pirates of Penzance” show opens we find Frederic, an orphan indentured to pirates as a young boy when his nursemaid, hard of hearing, mistook the word “pirates” for “pilots.”

Officially bound until his 21st birthday, Frederic learns that since he was born on Feb. 29 during a leap year, he has to serve until sometime in his 80s. Such is the silly and timeless comedy of “Pirates of Penzance,” according to 16-year-old Windom Mesure, who plays the “modern” Major General who sings about knowing everything, except military matters that is.
“It’s one of the wackiest things in theater — it is so classically funny,” Mesure said.

Besides the humor, audiences are sure to appreciate the show’s “exciting and innovative set design and directing,” according to 16-year-old Josh Seitz, who plays the Pirate King. Of his character he said: “I decide who to slay, who not to slay and who to plunder.”

The production is pushing 17-year-old Kara Edwards as an actor — she plays a male Sergeant of Police — but she has a game plan to help her get in character.

“I have a feminine face and my voice is high so I’m hoping a fake mustache will help me find my inner masculinity,” Edwards said.

Lincoln said she chose “who seemed right for which role” no matter the gender. Alex Kellogg, for example, plays the female character of Ruth, the piratical maid of all work, as he has an “amazing falsetto,” Lincoln said.
In his first lead role as Frederic, Ben Green, one of just a few seniors in the show, has been working hard to get down the postures, dialect and other subtleties of the role with the expert mentoring of Lincoln, he said.

“She is such a gift, she is one of the best directors I have ever had,” Green said. “She is a good combination of pushing us and supporting us. And she has high expectations.”

Lincoln credits the active local YSHS Theatre Association with helping her get the show ready to perform.

“There are a lot of schools that can’t afford drama, and for the parents to step up and make sure their children have the experience is incredible,” Lincoln said.