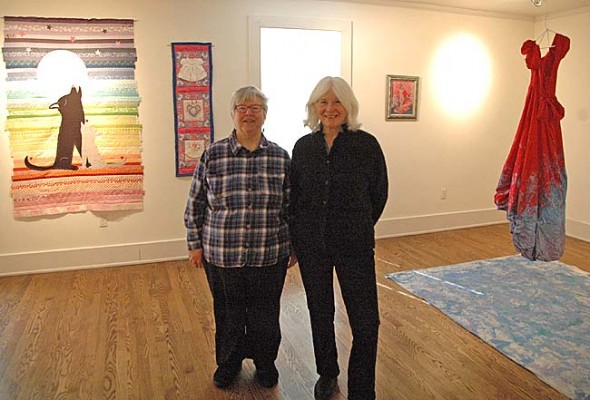 For an event that has been centered on the free and unhindered expression of women for 35 years, the annual Women’s Voices Out Loud visual art display was not likely to stay behind closed doors.

Confined to a meeting room in the John Bryan Community Center last year after its 2012 exhibition sparked controversy when village employees took offense to nude artwork, Women’s Voices is now uninhibited again at the Herndon Gallery at Antioch College.

Despite the freedom regained, the annual art show and performance is still reeling from last year’s Council decision that the Women’s Voices exhibit was inappropriate for public display in the halls of the Bryan Center, organizers said this week. Submissions are down from artists still hurt by the recent restrictions and public criticism. The same controversy highlights that a need for such an event persists, they added.

“It takes time to repair the damage and rebuild the confidence,” said co-organizer Laurie Dreamspinner. “It was a huge disrespect to women’s voices and expressions in the world. Huge. It cements why we need to have these events.”

The 35th annual Women’s Voices Out Loud performance will take place at 7 p.m. on Saturday, March 8, at the Herndon Gallery in South Hall on the Antioch campus. The exhibition of artwork will hang in Herndon through March 31.

A longstanding public ritual where local women of all ages stand up to speak their minds and share their artwork, this year’s performance features original poetry, spoken word, song, dance and more, while 42 pieces of artwork from 27 local women fill the walls of the Herndon.

Women — and anyone identifying as female — can literally express whatever they want, however they want. Work is not solicited. Instead, whoever comes forward can share.

“It’s really open and it allows folks to have their say who might not otherwise come to the table,” co-organizer Liz Hale said. “Whatever people bring is what we use — it’s a woman’s story and how she chooses to tell it.”

As a result, each year’s amalgamation of voices is different — “It becomes a new work of art itself” in Hale’s words.

“You don’t go away unchanged, that’s the beauty of it,” Hale said.

While this year’s art exhibit is still skimpier than it has been in recent years, according to Dreamspinner, it contains several powerful pieces, especially because at Herndon there are no restrictions on the artwork’s content. Among the pieces are an eight-foot tall clay sculpture of a nude woman, by Beth Holyoke and Käthi Seidl, a bright collage made of recycled Kroger and Rumpke bags, by Janeal Ravndal and a touching mother-daughter quilt of a wolf and her pup howling at the moon, by Kim and Marian Krier.

A dramatic piece in the show is the installation of a red dress hanging above a drop cloth, by Antioch College student Katie Olson. Olson, who used the same dress on a male model she painted wearing it to discuss socially acceptable notions of gender and femininity, said her piece in the Women’s Voices Out Loud show aims to dismiss society’s conceptions by “banishing the concept of only having a gender binary and what the classic idea of femininity was.”

“I used the dress as a symbol that I could destroy with paint and painted a new idea of gender on my canvas,” Olson explained. “To paint the piece, I wore the dress, dipped its edges into the multiple colors of paint, and had the train drag across the white surface.”

Organizers of Women’s Voices Out Loud said they are grateful Antioch College took them in this year. While initially the plan was to perform, and display artwork, in the new theater building on the Antioch campus, delays in that building schedule meant that another space would be needed. A fortuitous window of time at the Herndon Gallery when no exhibits were scheduled allowed the event to be scheduled there.

Dreamspinner sees the Antioch location as an opportunity to raise “new awareness among the Antioch community of the ways in which Yellow Springs is a supportive environment for them.” She hopes Antioch students participate in, and attend this year’s show, with hopes of more collaboration in the future.

Looking back, and ahead

The Women’s Voices Out Loud event had its roots in a late-1970s newspaper column in the Yellow Springs News that was called “Women’s Voices” and featured such local women as Jean Hudson, Joan Margaret, Dorothy Smith and Susan Carpenter. That group, which also started the Yellow Springs Chapter of the Feminist Writer’s Guild, decided to “go out loud,” in the words of Carpenter, with an annual event.

At the first event, in the meeting room at the Yellow Springs Community Library in December 1980, about a dozen women performed songs and poems, while others erected original artwork including a quilt, paintings and a dollhouse, and a table of pies served as both one woman’s artistic contribution and the evening’s refreshments. Books by Margaret Atwood, Adrienne Rich and other female authors were put on display. But getting women to speak up was not easy, according to Carpenter.

“We begged women to participate,” Carpenter said. “Women were very reluctant to read their own words. Some settled for Sylvia Plath or Marge Piercy.”

But those who participated came away with a “wonderful feeling,” Carpenter said, and that feeling continues to this day.

Women’s Voices Out Loud events were also held at the local Unitarian Universalist Fellowship and Rockford Chapel before outgrowing such small spaces and settling in at the Bryan Center. By the late ’80s and early ’90s, crowds regularly packed the gym there, where it was standing room only, according to Lynn Sontag, a former organizer.

“To me, it’s a crazy quilt from Yellow Springs, and what seams it together is the audience,” Sontag said.

That audience has changed as well. While in the beginning you would find only two or three men sprinkled in the audience, today about one third of the audience is male, according to Dreamspinner.

While there were times in the history of Women’s Voices Out Loud when some organizers considered turning the show into a juried exhibit, where work is approved or denied by professional artists, others thought that was antithetical to the spirit of the event. So did Dreamspinner.

“It’s not juried and anybody that is women-identified can participate — that’s big,” she said. “You don’t have to worry about whose stuff is good enough.”

Since the first event, times have changed, and so have women, but gender equality is still far off. When the Women’s Voices Out Loud event started in 1980, women made only 60 percent of what men made; today they make 77 percent. Hale believes that while women are now more visible in society, their voices are now more assimilated, which is not the best thing when it comes to free expression. To Dreamspinner, “women’s work” like childcare is still not respected or fairly compensated, while “young girls are told in subtle ways that what they have to say isn’t as important as what males have to say.”

Sontag agrees that women still need their own event, having defended the idea many times over the years when men argued that they should be able to participate too. Sontag said she essentially tells them: “The whole world is men’s voices out loud. Just give us an evening.”

And even if women’s situation did improve markedly in the next 35 years, Dreamspinner envisions there would still be a need for Women’s Voices Out Loud.

“It’s an event that proclaims the sacredness of our lives and our work and our words, so no, we can’t afford to have it stop.”