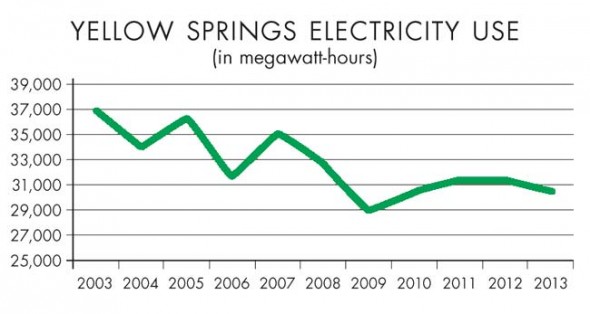 Electricity use in Yellow Springs fell from 37,000 megawatt-hours in 2003 to 30,600 MWh last year, in part due to energy-efficiency measures implemented under the Efficiency Smart program. (Source: Village of Yellow Springs)

Yellow Springs shaved 3.7 percent off of its annual electricity use over the last three years, thanks to a communitywide energy-efficiency program.

Now, Village government has extended its contract with Efficiency Smart to offer more services and incentives through 2016, with a goal to make even deeper cuts to the town’s electricity consumption.

Businesses qualify for even more products and services, and large users consuming more than 500,000 kilowatt-hours annually have access to a personal energy consultant.

According to American Municipal Power Inc., or AMP, Yellow Springs embraced the program more aggressively than most communities, and cut its electric use by more than twice the initial goal set by Efficiency Smart. Efficiency Smart estimates that about 1,153 megawatt-hours of electricity have been saved out of a villagewide average annual use of 31,234 megawatt-hours from 2011 to 2013, resulting in a load reduction of 3.7 percent.

“You’re one of the unusual ones,” Corbin added on Village Council’s quick decision to re-enroll in Efficiency Smart late last year. “We usually have to go to towns three, four or five times before they sign up.”

The program’s annual subscription fee, which is tied to a community’s annual electric use, is projected to cost the Village about $43,000 per year, based upon 2013 usage figures.

According to Council President Karen Wintrow, the Efficiency Smart program helps the Village’s electric customers by making it more affordable for them to upgrade appliances that can save them money. It also helps the community as a whole.

“[Customers] have the ongoing savings that they realize every month with reduced energy usage as a result,” Wintrow said. “And they’re helping the community reach the goal of reducing the carbon footprint.”

Overall electricity use in the village has been flat in recent years, in part because of the impact of energy-efficiency measures, according to Jerry Papania, chair of the Energy Board. Village electricity use fluctuated between 32,000 and 37,000 megawatt-hours from 2003 to 2008, falling to 29,000 MWh in 2009 after Antioch College closed and the recession hit. While it rose again to 31,500 MWh in 2011 and 2012 due to increased commercial and industrial demand and unseasonably warm weather, it dropped again to 30,000 MWh in 2013, according to Papania. Because there are likely more electric devices at use in homes and businesses in the village, energy-efficiency improvements must be a factor in the decline, he said.

Over the last three years, four of the town’s largest electricity users led the way — Antioch College, YSI Inc. (a Xylem brand), Tom’s Market and the Village — together trimming almost 90 percent of the total with 11 energy-efficiency projects, mostly upgrades to HVAC and lighting systems.

Residents, who make up the vast majority of the Village’s 2,700 electric customers, took to the program with somewhat less gusto. They received 1,634 free light bulbs through the program, purchased 563 discounted light bulbs, redeemed 11 rebates on the purchase of efficient appliances and recycled 35 inefficient refrigerators and freezers, saving a total of 130 megawatt-hours. Efficiency Smart paid out $7,176 to residents for the products.

But with many more product rebates now available to residential customers, those savings figures are projected to grow, while the costs of the program to the village are dropping, according to Corbin.

“We continue to increase services, but we’re not asking for more money, we’re doing it for less,” Corbin said. “It is a unique aspect.”

The initial contract with Efficiency Smart came about after AMP was cited by the U.S. Environmental Protection Agency for violating the Clean Air Act at its Gorsuch coal plant near Marietta. The Village decided to use its share of the $15 million EPA settlement, about $180,000 over three years ($60,000 per year), to cut local electricity consumption through Efficiency Smart, the company that AMP contracted.

While the village’s initial fine was calculated from its participation level in the Gorsuch project, the new contract rate for participating in Efficiency Smart is $1.40 per megawatt-hour of electricity consumed.

The Village used Efficiency Smart rebates last year to purchase equipment for a new HVAC system at the Yellow Springs Community Library and to upgrade lighting at the Bryan Center. It also received a $21,000 rebate from Efficiency Smart to purchase new street lighting during a replacement project that began in 2010. That project, which cost around $139,000 in equipment and labor, saves the Village almost $50,000 in annual operating and maintenance costs, and will pay back its initial investment in just 2.4 years, according to Papania. The efficient street lights themselves save about one percent of total villagewide electricity use each year.

By re-enrolling, the Village will also earn an energy-efficiency grant of at least $10,000, which it can use to further offset costs to local electric customers who participate, or for a municipal energy-efficiency project, Corbin said.

“Energy efficiency is important because you’re lowering the overall usage as a community so the community has to buy less,” Corbin said. “You’re replacing a more expensive asset on the market with a cheaper one.”

Yellow Springs’ energy savings came in 236 percent higher than the initial three-year program goal set by Efficiency Smart of 1.66 percent per year. In total, the 49 participating communities saved 150 percent of the initial three-year goal, reaching a total savings of approximately 121,744 megawatt-hours, according to preliminary figures.

Visit http://www.efficiencysmart.org for more information on rebates and to purchase discounted lighting.