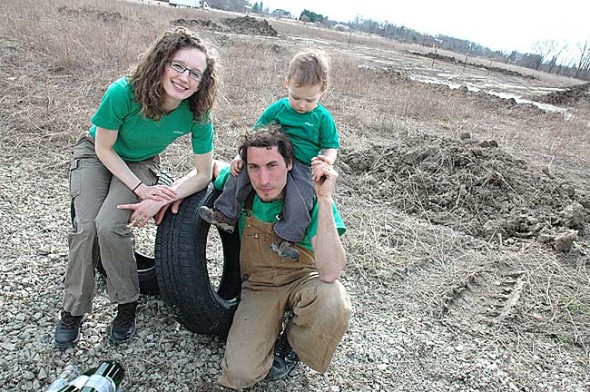 Lauren and Zac Craig recently prepared the land on a property just outside of Clifton to build a passive solar earth-berm Earthship with old tires, discarded glass bottles and other used materials. The start of a series of Earthship construction workshops and work days begins April 12–13 with a weekend workshop on tire foundation. Also pictured is the Craig’s son, Elliot. (Photo by Megan Bachman)

A home that takes care of you

A young couple hopes to quit their day jobs, live closer to the land and raise their toddler in nature. The story is straight out of the early 1970s, and so is the passive solar house the couple plans to build out of old tires and tin cans.

Lauren and Zac Craig are building a customized home just outside of Clifton — about four miles east of Yellow Springs — in the model of the Earthship, a design conceived in the 1970s as an off-the-grid earth-berm solar home built from recycled materials. It harvests rainwater, is heated by the sun and cooled by the earth and reuses what some might consider garbage.

“It’s a home that takes care of you,” explained Lauren Craig. “It’s a living, breathing thing that uses resources that we no longer had a use for, like tires.”

What the Craigs call their “Second Hand Home” is also planned as a new lifestyle for the Dayton couple, who said they are tired of the two-income grind, and that they want their 20-month-old son, Elliot, to learn real-life skills on the land.

“Instead of going to work 40 hours per week and paying someone for our electricity and gas and water, these are things we can provide for ourselves,” Lauren said. “We’re going to be spending more time keeping ourselves alive and more time as a family.”

Tires rammed with earth will make up part of the home’s 1,700-square-foot one-story structure. Rainwater harvested from the roof and stored in three 1,700-gallon cisterns will provide water for drinking and bathing. A wood-burning stove will be for cooking. A super-efficient rocket stove and radiant floor heating will keep the family cozy and warm. Grey water, such as from dish water will be recycled onto vegetation on the property and composting toilets will break down wastes naturally.

The Craigs are inviting others who want to learn about Earthship construction to participate in a series of workshops and workdays to help build their home, beginning next weekend with a two-day tire foundation workshop.

The workshop is from 9 a.m. to 5 p.m. Saturday, April 12, and Sunday, April 13, at the property, 2687 South River Rd., Cedarville. The cost is $35 to cover food expenses and scholarships are available. Those who can’t attend the workshops but want to learn more can participate in workdays that will take place on most weekends throughout the month.

To register or learn about workdays contact Lauren at secondhandhomeproject@gmail.com.

Jay and Annie Warmke of the Blue Rock Station green living center in Philo, Ohio east of Columbus will lead the workshops, having built the first Earthship east of the Mississippi River there in the late 1990s. Over the two days the Craigs hope to prepare 400 of the nearly 900 tires that will be used in the structure. Future workshops will cover framing and integrating windows and doors into the Earthship and straw bale building.

Even if participants don’t plan to build their own Earthship, the workshop might appeal to those interested in green building or alternative living, according to Jay Warmke.

“It’s fascinating,” Warmke said. “The idea with the Earthship is that nature provides a lot of things that make for a comfortable existence and it does it at no charge. It’s a different way of looking at the world.”

To Warmke, in addition to being environmentally conscious, among the other advantages of the Earthship are that it is something that people can build themselves, uses materials that are typically thrown away, and is designed so it can be dismantled and rebuilt.

“The home itself works better than the traditional home because it does naturally the things that other people’s homes have to use energy to do,” Warmke said. Earthships are also known for their resistance to fire and are more than 100 times more structurally sound that the traditional framed house, he said.

Other plans for the Craigs’ Earthship include straw bale insulated walls, a south-facing wall of windows that acts like a greenhouse to heat the home, mosaic tiling created in adobe plastered interiors, a 100-square-foot root cellar, a wall made of hundreds of recycled wine bottles for a stained glass effect and finding as many free or cheap materials for everything from claw-foot bathtubs to windows and doors to flooring and countertops.

Solar photovoltaic panels are planned for the long term. The Craigs’ Earthship is the first of its kind in Greene County, the nearest one being located near Wilmington.

The seed of building the Earthship was planted when Lauren, a 27-year-old mental health counselor, and Zac, a 29-year old electrician, both of Centerville, began to question their conventional lifestyle when their son was born in 2012.

“We were just passing the baton — he would go to work and then I would go to work,” Lauren Craig explained. “It was monotonous and we wanted to spend more time as a family together. We felt forced into continuing in how we were living, instead of being more thoughtful about how we were moving forward in our lives.”

While brainstorming ways they could spend more time together as a family, a friend suggested offhand that they build an Earthship, a concept the Craigs took to immediately as “hands-on people who want to take an active role in things,” Lauren said.

A visit to the Warmke’s Earthship sealed the deal, and the Craigs soon after found a perfect five-acre property near the intersection of Ohio 72 and South River Road for their Earthship.

“We loved it because we had access to Yellow Springs, which we both identify with, and also the rural small town of Clifton,” Lauren said. “We have the best of both worlds.”

With the help of the Warmkes, the Craigs designed their new home around their lifestyle, with the goal of being as sustainable as possible. They modified the Earthship concept, originally designed for the desert Southwest, by adding more insulation and adjusting orientation for the maximum solar gain in order to keep a constant temperature during cold Ohio winters.

According to Warmke, the Earthship is designed with so much thermal mass in its earth-rammed tires that it maintains a constant internal temperature of around 55 degrees year round, which is similar to the temperature in a cave. The Warmkes rely on stable temperature of the earth and don’t use any external heating source, except for the sun that streams into the south-facing windows. As a result, their heating and cooling costs are zero while the home always feels comfortable, Warmke said.

“The biggest misconception about the Earthship would probably be that you give up something,” Warmke said. In addition to being “extremely comfortable,” the Earthship “provides basically all the utilities,” Warmke explained. Having hosted some 30,000 visitors for tours of Blue Rock Station, Warmke sees that most people don’t see their daily household activities as being dependent upon the natural world.

“We as a society are disconnected from the world, and it has caused a certain anxiety,” Warmke said. “They don’t know what [that anxiety] is but it is uncomfortable, but they are searching. Connecting with the patterns of the world is a bit more healthy.”

Being more in touch with the natural world drives the Craigs, who also aim to use the resources they harvest on the property as sustainably as possible.

“It’s appealing to us because we’re taking more ownership of our actions,” Lauren said. “These are resources we’ve worked hard to obtain so we want to make use of them at the greatest possible level. We hope to live in this home forever.”