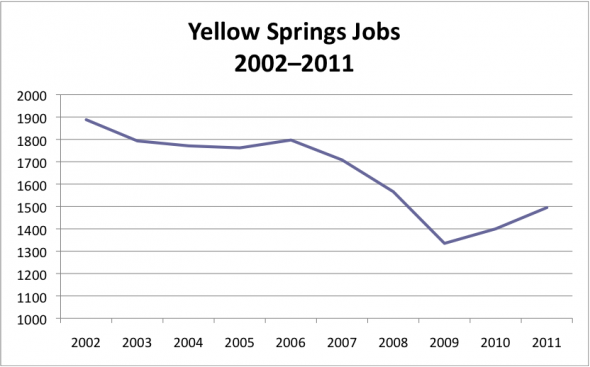 Yellow Springs lost 20 percent of its jobs between 2002 and 2011, though jobs have rebounded since the recession. (Source: U.S. Census Bureau)

Click to view all the articles in this series.

Today less than 20 percent of those who live in Yellow Springs also have their primary job here, a number that has been falling over the last decade, according to U.S. Census Bureau figures. With local jobs on the decline, to make ends meet residents are increasingly looking outside of town for employment — many traveling more than 50 miles for work — or working from home in greater numbers. That means less money is flowing to Village coffers, as employees are first taxed where they work.

Between 2002 and 2011 the village shed around 400 jobs, a 20 percent decline. Jobs in manufacturing and lower-paying jobs were lost at an even faster clip. Education is not only the principal occupation of local residents, but the main industry of the village economy, accounting for about one third of all local jobs — even though gains in that industry have only recently begun to make up for job losses incurred over the last decade.

Overall, annual payroll from local businesses has been stagnant for almost two decades, putting more pressure on Village government, which relies heavily on an income tax on local workers to pay for services. And this is not just part of a regional trend. Job losses here have been worse than regional and state averages and have taken place amidst job growth in Greene County and the U.S. from 2002 to 2011. 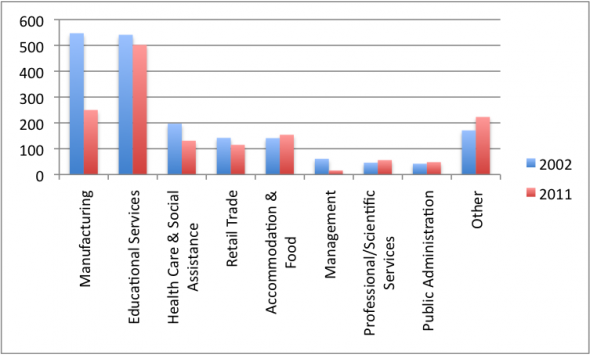 But the local economic picture has a silver lining. While the Yellow Springs economy has fared poorly in recent years, the financial situation for most households has improved, with local median household income outpacing state and federal growth to reach $58,750 in 2012. Over the last decade, the number of local firms held steady, with many smaller businesses now dominating the economic landscape and new businesses sprouting up each year. The unemployment rate in the village remained steady at around eight percent over the last 10 years and is currently near the state average of 7.5 percent. And local population has appeared to stabilize around 3,500 in the last few years after declining 25 percent since 1970.

Read the full story in the March 27 of the News, and read previous articles from our series “Eye on the Economy here:

Coming home, but not for jobs

Topics: , Economy, eye on the economy