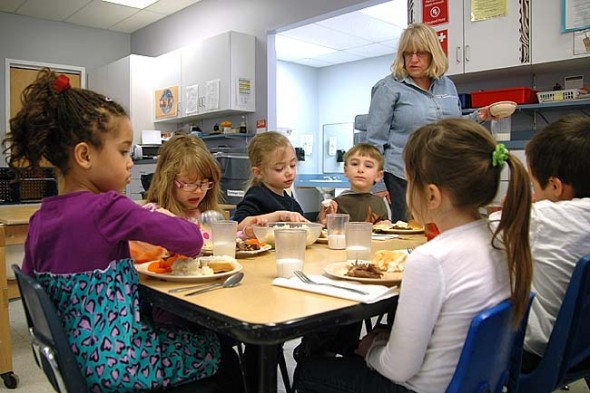 “There’s a rising epidemic of anxiety,” fueled by a culture of fear and the ubiquitous presence of technology, says Timothy Callahan, a clinical psychologist and the director of mental health programming for the Greene County Educational Service Center (GCESC), which is based in Yellow Springs.

What’s more, that epidemic is affecting our children and their abilities to learn, thrive and get along with others.

Educators often feel they’re playing catch up, Callahan said. “By the time we get them in school, we’ve missed five years of their development.”

That’s why GCESC is intensifying attention on early childhood education, working more intensely with preschool-age children, their families, and communities. In Yellow Springs, that work will take place at The Friends Preschool program at Friends Care Center, the county agency’s local unit.

In support of its efforts, the ESC got a major boost this school year when it received a grant for more than $2 million. The purpose of the award is to:
• promote early childhood social and emotional learning and development,
• encourage positive mental, emotional and behavioral health,
• enhance academic achievement,
• prevent substance abuse
• create safe and violence-free school climates.

It’s a multi-armed task, but each arm is integrally linked, said both Callahan and his GCESC colleague Anya Senetra, who wrote the grant application.

The money was awarded through the Ohio Department of Mental Health and Addiction Services, from an $8.1 million federal Safe Schools/Healthy Communities grant to the state. The GCESC is one of only three Ohio districts to share the award. The other two are Williams County ESC and Harrison Hills City Schools. Each of the districts will receive about $520,000 annually for four years.

State officials invited the local agency to apply for the funds based on its existing infrastructure and community outreach, Callahan said. “We’re the only ESC with imbedded mental health services,” he said. “We have been asked to come up with a model program that can be used across the state.”

The first year of the grant, which is already in full swing, is focusing on assessment and evaluation of current needs and services in Greene County, with an emphasis on early childhood mental health, Senetra said.

The second year will include program design, the expansion of teacher training and support as well as increased community outreach and engagement. The final two years will see program implementations.

“The gist of the grant is really matching the science that earlier intervention can reduce so much more suffering in mental illness than we ever knew,” Callahan said. The emphasis is on developing a preventative model. “If we can intervene early, we can reduce symptoms later.”
Community involvement is a vital component, both Callahan and Senetra said. “We want to reach out to the community to help them help us,” Callahan added. The goal, Senetra said, is “to design programs with the community and not to the community.”

Toward that end, a core management team has been formed with representatives from a variety of community segments, including children’s services, early childhood education, behavioral health, juvenile court and Wright State University. The team began meeting in December to assess countywide needs — “to look for the gaps,” Senetra said.

“One of the core elements is having parents involved,” Callahan said. “That’s one of the big gaps for us.” Challenges to family engagement, however, include such issues as transportation and day care, he said. “We want to get families involved so that it doesn’t burden them and so they can play a meaningful part.”

As part of its assessment efforts, the management team has looked at a variety of data, including local health indicators. “We rank poorly pretty much across the board,” in terms of overall health, Senetra said.

Callahan said that the agency wants to stress that “the separation of mental health from (physical) health is a stigma” that needs changing. “Mental health issues are often thought of as a personal failing, rather than a biological issue.” Ending the stigma is important in addressing individual and community needs.

“People ask, ‘Why would a 3-year-old need mental health services,’” Callahan said. “Our mission is based on really clear science.” Reaching children early to teach them coping, and self-regulatory skills can reduce substance abuse and gang involvement later. “These are not symptoms of mental illness; they are other ways (children) learn to cope. … For children, their behaviors are their solutions. They’re trying to find a way of coping and managing a distress.” The goal of the GCESC, with financial assistant of the new grant, is to give local teachers, families and community agencies the tools and support to teach our children healthy ways to respond to the distresses in their world.

“It’s a jungle out there for kids,” Callahan said. “Bullying is a form of trauma — especially for teens — that feels life-threatening.” Related issues, he noted, include suicide, the third leading cause of death for young people aged 10–25.

By the time the grant ends after the 2016–17 school year, the training and programs will be in place. “We feel this can be sustained, Callahan said. “I think people will see that it really does work.”