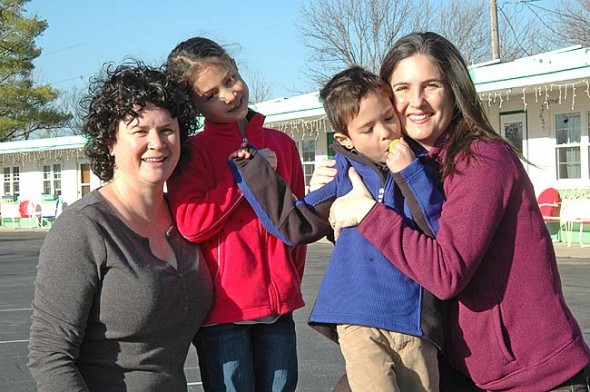 The Catalanotto family, from left, Debbie, Sophie, Finn and Kate, is staying at the Springs Motel this week and next while they get to know their service dog, Echo. The Springs is hosting them while they spend their days at 4 Paws For Ability in Xenia, which pairs trained service dogs with individuals with disabilities. (Photo by Lauren Heaton)

Help from a different kind of watchdog

Finn Catalanotto and his twin sister Sophie were very eager to leave the playground next to the Springs Motel, where they have been staying this week away from their home in Cincinnati. Though the sun was out and the teeter totter beckoned, Sophie especially was brooking no delays in getting her family to 4 Paws for Ability in Xenia on Tuesday morning. They had come, after all, to meet their new golden doodle, Echo, and to her, there was clearly no time like the present to get started.

Echo is a service dog that Kate and Debbie Catalanotto adopted for their son, Finn, who has autism. The dog will help Finn to regulate his emotions, encourage him to interact with other people and help to keep him safe from wandering off unattended. During the two-week training period while the family gets to know Echo and learns how to interact with her, The Springs Motel has offered to host the family. Motel owner Kat Johnston received a letter from the Yellow Springs Chamber of Commerce last month indicating the Catalanottos were looking for a place to stay, and she volunteered to have them.

“They weren’t very familiar with Yellow Springs, but they thought it looked more interesting than Xenia… Excellent decision!” Johnston wrote in an email last month. “I think we may be the only place that allows dogs, so I offered up the Springs.”

The cost of the dog and its training is considerable. The Catalanottos held a big fundraiser and raised over $13,000, the amount 4 Paws requires for a service dog. But there is a constant flow of services needed to advance Finn’s development in speech, behavior modification and socialization skills. So the family is grateful for the support the Springs Motel is offering during their training period with Echo.

“Kat putting us up — it’s so amazing she did that,” Kate Catalanotto said this week.

And Kate believes Finn understands and is happy to be getting a new friend, too. Last week as he was getting ready for bed, Kate heard him talking.

The family will be in Yellow Springs through April 11, when they get to take Echo home with them.