Losing one’s home to foreclosure is most often traumatic. Foreclosures hurt communities, too.

Though Yellow Springs has weathered the housing crisis well with only a small dip in home sale prices, foreclosure rates are relatively high here and may be on the uptick. Since 2006 the village has averaged seven homes in some stage of foreclosure and 4.5 foreclosure sales per year, about three times the Greene County average per housing unit. 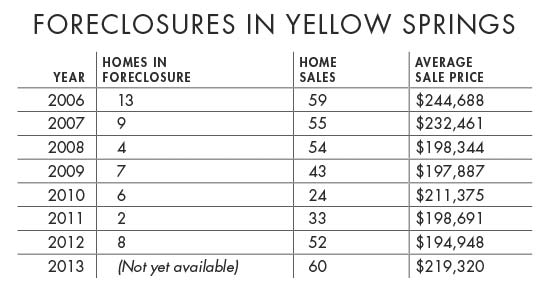 Enter local Community Land Trust Home, Inc., which has had no foreclosures on the 15 owner-occupied homes it has built since 1998, and lots of ideas on how financial counseling and homebuyer education can prevent foreclosure.

“When we found the foreclosure rate was high here, we wanted to provide some of our services,” said Home, Inc. Executive Director Emily Seibel. “Yellow Springs is not immune to the impact of the recession here and even though we have a strong housing market, people are struggling.”

How to avoid foreclosure, and work with lenders during foreclosure, will be on the agenda of a free community mortgage workshop hosted by Yellow Springs Home, Inc. and the Neighborhood Housing Partnership of Greater Springfield from 6 to 7:30 p.m. Tuesday, April 15, at the Yellow Springs Community Library. Other topics to be discussed are refinancing options, resources available for major home repairs and weatherization, free financial counseling and frequent mortgage rescue scams.

At the workshop there will also be information on how people can take advantage of the state’s popular Save the Dream program, which has helped thousands of families who have experienced a sudden job loss, divorce, medical issue or family death to stay in their homes. Registration for the state program, which provides rescue funds of up to $35,000 of a homeowner’s mortgage, expires on April 30.

Workshop leader Kerri Brammer, manager of the Homeownership Center at the Neighborhood Housing Partnership, emphasized that the workshop is not only for those who are in foreclosure, but anyone with a mortgage, or even aspiring homeowners, since unexpected life events like loss of income can throw anyone into dire financial straights.

“It doesn’t take much and foreclosure can happen to anyone,” Brammer said. “In Ohio you only need to be 120 days behind on payments for the legal proceedings of foreclosure to begin.”

Once foreclosure begins, there are many steps that homeowners can take to avoid losing their home, Brammer said. First, they shouldn’t abandon their property, since the entire process can take nine to 12 months or longer, and doing so means homeowners lose options to negotiate. Second, the earlier that homeowners begin lender negotiations the better, since legal fees begin accruing to the homeowner as soon as a lender files a foreclosure complaint. The best-case scenario is that a lender can modify the loan by lowering the interest rate or extending the term of the loan if mortgage payments are deemed to be a hardship, Brammer said.

“It’s easier to bury your head in the sand because you’re embarrassed, but it’s so much better to reach out as early as possible,” to an agency such as hers, Brammer said.

According to Brammer, foreclosure counseling has consumed the agency’s efforts for the last six years, and though the housing crisis is easing in much of the country, Ohio is still seeing relatively high foreclosure rates.

“I know in parts of the country things have improved, but in Ohio we have the job situation,” Brammer said. “We are still having people calling in who have lost jobs, or have become employed again but are making half of what they used to make.”

According to the RealtyTrac website, as of February 2014, 1 in every 941 housing units in Ohio was in some stage of foreclosure (default, auction or bank owned), higher than the U.S. rate of 1 in 1,170 units. Greene County fared worse, with 1 in every 599 homes in foreclosure. The seven-year average for Yellow Springs, at 7 houses per year, is 1 in 227 occupied housing units, or 1 in 205 improved residential lots. Foreclsoures varied from a high of 13 in 2006 to a low of two in 2011. In 2012 there were eight foreclosures and six foreclosure sales, according to the Greene County Sheriff’s website.

Foreclosure also continues to be a problem in Ohio because many homeowners owe more on their mortgage than their home is worth, a condition known as being “upside down” or “underwater,” Brammer said. In previous years, homeowners behind on payments could just sell their home, which is now not possible because of market depreciation. But in Yellow Springs housing sale prices did not drop during the housing crisis as much as in other communities, which means that fewer homeowners likely face this situation.

Last year the Yellow Springs housing market had its strongest year since 2007. Sixty houses were sold, the most since 2005, and the average sale price, $219,320, was up 13 percent from 2012, and was 70 percent higher than the Dayton area average, according to data from the Dayton Area Board of Realtors. Housing prices, which fell by 20 percent during the housing crisis, are now just 10 percent down from the peak in 2006 (though in some years sales averages can be skewed by one single high sale).

Still, Yellow Springs is not immune to the impacts of foreclosures here, according to Brammer. Foreclosed homes can spend years off the market and in disrepair, harbor criminal activities, lower property tax collections and decrease local housing values. According to Brammer, one vacant house in a neighborhood lowers the value of nearby homes by $3,000 to $4,000.

“Nothing good happens in an empty house,” Brammer said.

Who is buying the foreclosed homes in Yellow Springs? Foreclosed homes have sold here for as low as $1,000 and as high as $270,000, but the average sale price is not cheap at almost $120,000, and since homes are sold as-is, can entail significant risk. Home, Inc. bought one property, on West Davis Street, but the home was in such disrepair that it had to be demolished. Mark Partee, owner of local HVAC company A-C Service Co., has bought two foreclosed homes in recent years along with other properties, which he has renovated and turned into rentals. Other foreclosed homes were bought by villagers and out-of-towners who renovated and sold them, but the idea of buying low and selling high quickly with little investment is not very lucrative, according to local realtor Craig Mesure.

“If you’re trying to flip a house here in one or two years, you can’t do it,” Mesure said, since housing values aren’t increasing that fast here each year. “But overall it’s still a good bet to own property in Yellow Springs, as long as you plan on living here for a while.”

To Mesure, foreclosures haven’t affected the local housing values much, though they have decreased the amount of properties on the market since banks can hold onto them for years. Currently the local housing market is “healthy” but has a low inventory of between 20 and 25 homes spread across price ranges, Mesure said. Another reason Yellow Springs doesn’t have more foreclosures is because many residents own their homes outright, according to Mesure. In 2010, 22 percent of all occupied housing, 357 units, were owned free and clear, just slightly more than county and state averages.

Meanwhile, those living in the permanently affordable houses built by Home, Inc. may have a better chance of avoiding foreclosure than others, which is why the local community land trust hopes to reach out to other residents struggling with housing costs, Seibel said.

Home, Inc. already provides these “stewardship” services to its homeowners as the “developer that doesn’t go away,” Seibel said. This includes nine hours of homebuyer education and an orientation for all new homebuyers. The non-profit also offers financial counseling to the 42 families currently on its waiting list. To help residents who live in traditional market-rate homes, Home, Inc. recently received a grant from the Yellow Springs Community Foundation to formalize its homebuyer and homeowner coaching and it is in the process of launching a low-interest home improvement loan fund through the Yellow Springs Federal Credit Union (funds which would initially only be available to Home, Inc. households).

“This mortgage workshop is the first step in helping a larger number of households,” Seibel said. “We’re definitely interested in being a community resource, and right now we’re happy to be a referral service.”

Those with questions on mortgages, basic home affordability, refinancing and the resources available in Greene County and beyond to help with home repairs and weatherization can call Home, Inc. at 767-2790.

According to Brammer, foreclosure can come with a stigma, but the workshop is for everyone since foreclosure affects all incomes. Though low-income homeowners who were targets of predatory lenders or took on adjustable rate loans made up the majority of foreclosures at the start of the housing crisis, now her agency is seeing more middle- and high-income homeowners with “legitimate loans” who have lost their jobs, Brammer said.

But there is hope, according to Brammer, as many of those who have experienced a foreclosure are now going on to purchase homes again. It can take around three years for homebuyers to get their credit reestablished after a foreclosure, she said. After all, buying a home is still a sound financial decision and an important investment, Brammer said.

“It’s cliché but I think it’s still the American dream,” she said.