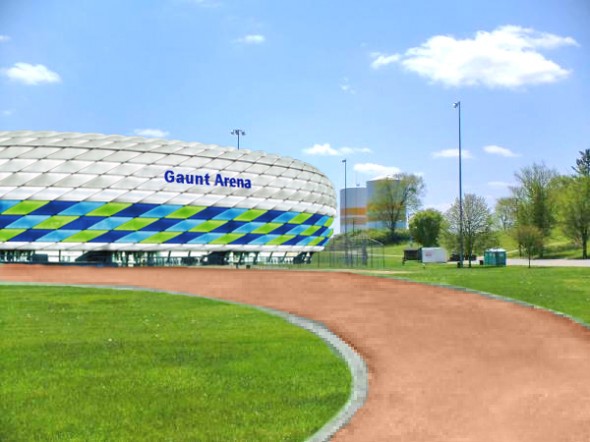 The team would be the twentieth in the growing MLS presence in the United States, according to the MLS website.

“It’s just right for the town,” says youth soccer coach Sean Coíste. “The village began formal soccer training and games in 1963, way before the rest of the country was hip to the sport. I came up through the ranks!”

But soccer isn’t the only thing that would benefit, according to proponents. The long sought-after economic boost, initially pinned on the ill-fated Center for Business and Education, or CBE, would come through marketing, licensing and special events taxes on the franchise.

Funding for the project has already been partially secured by redirecting the almost $1.2 million dollars initially intended for the CBE towards the planning and drafting of a new stadium at Gaunt Park: The stadium, a scaled-down version of the Allianz Arena in Munich, Germany, has been tentatively named “Gaunt Arena.”

California businessman Giuseppe Calcio, who invested a significant sum in addition to the erstwhile CBE monies, says that if the bid is successful, groundbreaking should begin in late May of this year. “I feel that if this stadium is built, it will be a great place for family outings and pull the community closer together. I also stand to make a nice return on this, um, investment in our community.”

Clifton resident Alejandro Santiago puts an environmental spin on the stadium. He believes that by having a professional-class stadium close by, people would “save a lot of gas by only driving the short distance” to Yellow Springs instead of all the way to Columbus. “And I attend [Columbus] Crew games all the time.”

“And how!” chimes in his wife, Maria José. “If all we had to do was visit Yellow Springs, I might just attend some games myself.”

But some villagers are not as enthusiastic about a MLS franchise announcement.

Community activist Ione Auden believes the stadium is ill-considered. “I don’t think this is right; the Village needs more green space and less commotion! It’s right in a residential neighborhood, and takes away two baseball fields from our children. What about t-ball now? And will we even be able to get to the park or the pool with all those new gates and fences?”

And professional dog walker Cain Iter points out there’s no room for his canine charges to frolic, play or “just plain relieve themselves.”

Longtime resident and former teacher Claire Oswald, who has lived in the village for about 70 years, says she has “never in my time heard of an undertaking this dumb!” She says the emphasis on sports is too great, and that the village should focus on education. “Maybe if they would allow the kids a hand in designing the stadium, it might be different. Talk about project based learning — ‘MLS’ will always mean ‘Mills Lawn School’ to me!”

Villager Frank Kendall, who lives across from Gaunt Park, however, has mixed opinons. “It’s going to be big, that’s for sure. But I kind of like the smell of popcorn.”

But Jake Cooper, 10, begs to differ. “I think it would be cool because I play soccer almost the whole year round. And, maybe I’ll get to see, like, Messi or Ronaldo!”