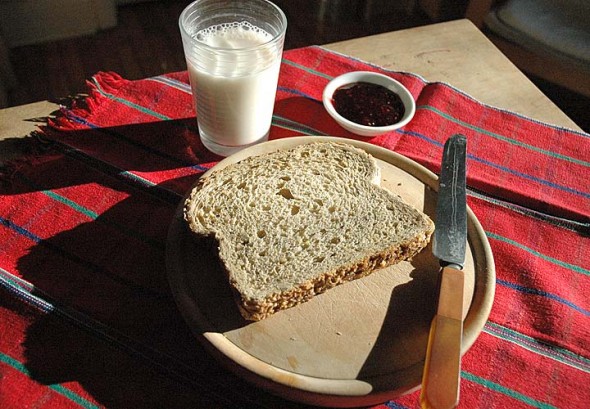 It’s not hard to get up in the morning when one lives in a place like Yellow Springs, but it takes a lot of energy: energy to grind and boil your organic fair-trade coffee beans; energy to cook the eggs from the backyard hens; energy to cool the co-op-purchased raw, whole milk.

But there’s one place on the breakfast plate where villager Bernard D. Tosste believes he can cut some energy out of the process. The humble slice of toast is possibly the most energy-hungry part of a breakfast, consuming up to 1,500 watts of electricity for a good two to five minutes to brown two slices of bread.

Bernie, as he likes to be called, has developed EcoToast (TM), an environmentally savvy way to a crunchy morning repast.

“Basically, my secret is air,” he said. “For years my wife has yelled at me to ‘use a [expletive] twisty’ to keep the plastic bag closed on the bread. I’d inevitably forget, and the bread would go stale. But then I realized that ‘stale’ is just a nudge away from ‘toasted’ ” he says.

Bernie says he initially started putting out a small amount of bread, “maybe half a loaf,” on cookie sheets the previous evening, in preparation for his breakfast. The resulting slices were crispy on the surface, a bit chewy on the inside, and “without the brown, burned edges that ruin a bite,” Bernie says. “Problem is, I’d have to get up at maybe 2 or 3 in the morning to flip them, to get the other side nice and stale — er, crisp,” he says. So Bernie began using the racks from his oven to allow uniform “eco-toasting.”

“And you know, racks stack!” he says. “That’s when I realized this could be bigger than just my breakfast.”

Bernie became a fixture last summer at the farmers market in town, selling out his EcoToast (TM) to the morning crowd, usually before 9:30 a.m. “It was amazing; I couldn’t dry it fast enough! People would come with their butter and jam and their coffee or chai, and just wait.”

His lucky break came when a wealthy, entrepreneurially-minded uncle visited in late August last year, and noticed the drying racks. “Uncle Seche saw how the whole set-up was taking a lot of space in the kitchen and family room. He paid to have a special sunroom addition built, with circulating air, where I could stack up to 200 loaves.”

Bernie calls his EcoToast (TM) “the greatest thing since sliced toasters — or something like that; we’re still working out the slogan.” And although it’s “a little premature,” he is toying with the idea of “going all the way” and investing in an eco-toasting facility in the newly-rezoned light industrial park north-west of the village. “But that’s a pipe dream, still,” he says, moving another rack of fresh slices into the sunroom.

Currently, EcoToast (TM) is available at the local grocery store and many of the village coffee shops. To preserve the natural crispy goodness, EcoToast (TM) is packaged in triple-wrap plastic bags with resealable ziploc-style closure and contain one or more packets of a silicate desiccant. 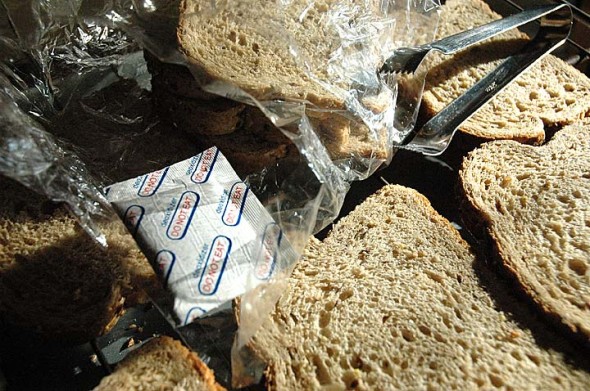 Several slices of EcoToast displayed in their final round of drying on their racks. A desiccant and three plastic bags ensure that the EcoToast’s crispy finish remains present after packaging. (Photo by F. Stop Fitzgerald)