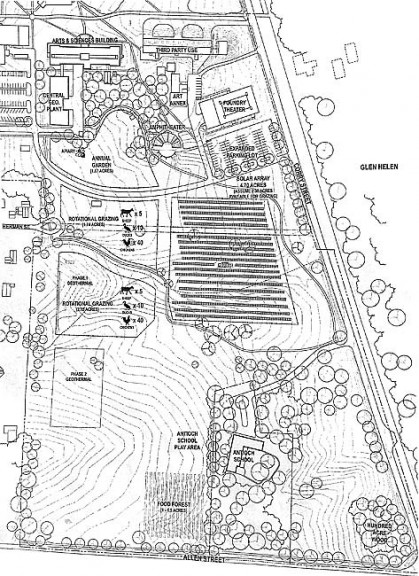 Antioch College will share its South Campus Master Plan at a public meeting at 7 p.m. Wednesday, May 7, in the John Bryan Community Center gymnasium. This year the college plans to use the land known as the “golf course” for growing vegetables, grazing meat animals, planting a food forest and constructing a five-acre solar photo­voltaic array. (Site plan coutesy of Antioch College)

View a larger image of the Antioch Farm plan.

Antioch College will lay out its long-term vision for a 36-acre property on the south end of campus known as the “golf course” at a public meeting next week.

In what Antioch leaders called a project central to the college’s mission to demonstrate sustainable ways of living, the college plans to use the land this year for growing vegetables, grazing meat animals, planting a food forest and constructing a five-acre solar photovoltaic array.

Within five years Antioch hopes to dig a second geothermal well field, pasture more —and larger—animals and designate public paths through and around the property, which will be largely fenced off.

According to Andi Adkins, Antioch’s vice president of administration and finance, the college organized the community meeting so it could share its plans with both concerned neighbors and supporters of its sustainability initiatives.

“There are people who don’t understand our plan and have misgivings, so we want to answer those questions,” Adkins said. “But we also want to celebrate with our supporters — those who are into sustainable farming and teaching kids how to farm and feed the world sustainably.”

Since the college first made public its plans to expand its farm at a Village Council meeting last August, a group of about 35 to 40 villagers, mostly the farm’s immediate neighbors, have organized in opposition, saying that the “golf course” has been valuable open space since 1930.

Specifically, the group, Yellow Springs Open Space Coalition, disapproves of the college’s plan to fence off most of the property, making it inaccessible to villagers, site an “industrial-looking” solar array there and pasture large ruminants like cows and pigs, according to Mike Kelly of the coalition. Neighbors also contend that the college has not changed its plans to accommodate their concerns, even though they are now part of an Antioch Golf Course Committee.

“People won’t be able to walk their dogs through the golf course, fly kites, throw a Frisbee, camp or continue all the uses that we have had there for more than 80 years,” Kelly said, adding, “I don’t think the college is listening. I don’t think there’s give-and-take.”

Kelly said deed restrictions that limit zoning changes on the “golf course” property demonstrate a long-held Village desire that the land be kept as community open space. When Antioch University sold the “golf course” to the Village in 1981 while under some financial stress, the Village agreed to keep the land as open space. Later, when Antioch repurchased the property in 1991, Antioch agreed to comply with the current provisions of E-1 educational zoning and to not seek a zoning change that would allow commercial or private residential uses on the site.

“What we take from those deeds is that they represent the history of the golf course as community open space, and a philosophy held by the Village and college,” Kelly said.

But Antioch leaders defended their plan for the property this week, saying that they are not violating deed restrictions since they don’t plan to seek a zoning change from E-1 education. Moreover, both a sustainable farm and solar array are a vital part of the college’s mission to find “new and better ways” of living and will help Antioch reach its stated goal of a zero carbon footprint.

Antioch Trustee David Goodman said in a phone interview that Antioch has an opportunity to use the property to lead in the development of ways humanity can live “without destroying the very resources we need to live, like food, water and energy.”

“The Antioch farm is not just a nice, cute way to say we’re green,” he said. “We need to figure out a way to have a physical place on the campus where we can create a model that works economically, practically, socially, spiritually and environmentally.”

Goodman argued that the farm will remain “open space” because it will still be partially accessible to the public but will additionally generate food, sequester carbon in its soil and be more ecologically healthy than mowed grassland.

“There’s a broad sense that what we’re doing is distinctive,” Boutis said. “The farm is the most significant realization of how we marry classroom experience and work to build an enriched learning environment for students in the context of a significant global issue.”

The initial phase of the Antioch Farm, which was started in 2011, has included a half acre for annual vegetables, a half-acre food forest of fruit and nut trees and native plants and movable grazing pens covering about one acre for 50 chickens and ducks and six ewes (female sheep). Those uses received Village administrative approval and then were grandfathered in in August by Village Council during an overhaul of the zoning code.

However, Council, in response to neighbors’ concerns, also decided at that meeting that in the new zoning code sustainable farming would be a conditional rather than permitted use in the E-1 education district, meaning that Antioch would have to seek Planning Commission approval for any changes to its farm operation such as adding more animals or barns.

According to farm manager Kat Christen, Antioch doesn’t plan to make any changes to its animal operation this year, but they are hoping to introduce about two cows, five pigs, 50 ewes and 30 goats in the coming years to help manage the grassland more sustainably while simultaneously producing meat for students.

While raising animals has become the most controversial aspect of Antioch’s “golf course” plan, Christen defended the use of animals, saying animals are critical for a sustainable farm because their manure fertilizes the land while the animals keep the grass and weeds down. And since students are now eating meat, raising animals is a way to provide a more healthy and local product for students, she said.

“Grazing animals allows us to distribute fertility and build the soil and enhance the ecological function of that area, managing that land without the use of fossil-fueled mowers,” Christen said.

Antioch will use the accepted sustainable practice of rotational grazing, so animals will only have access to 30 percent of the property at any given time, Christen said. Multiple kinds of animals are important because they eat different plants, she added.

Neighbors, however, still have questions about how many animals the Village will ultimately allow on the property, according to Kelly, citing concerns that animals will smell, pollute the land with manure and attract predators like coyotes and foxes. Antioch initially proposed that the upper limits for animals as a permitted use in the zoning code be up to 1,400 pounds per acre, with additional per-acre limits of two pigs, or 1.4 cows, or 17 sheep, or 35 chickens. However, when Council decided to make farming a conditional use instead of a permitted one, per-acre animal limits were not included in the code.

Antioch does plan to expand its planting areas this year. The South Campus site plan drawings for 2014 show an expansion of the annual garden just south of the Antioch Science Building to 1.67 acres and the planting of a 1- to 1.5-acre food forest along Allen Street near the Antioch School. The plan also shows two rotational grazing pens, of 1.74 acres and 2.15 acres, located south of the garden along the west side of the property.

There are also currently compost piles on the property that recycle campus food and organic waste. Long term plans additionally show a walking path circumnavigating the property and another cutting through between Herman Street and Corry Street, a reserved Antioch School play area just west of the school and protected woods at the corner of Corry and Allen Streets.

Construction could begin on a solar array on the “golf course” later this summer if the Village Planning Commission grants Antioch a conditional use permit to produce solar energy there. College leaders hope to seek approval from the Planning Commission in May or June to construct a 1.25-megawatt solar photovoltaic array on five acres on the eastern side of the golf course along Corry Street. If the Planning Commission approves the plan, more than 3,300 panels measuring around six feet by three feet will be erected inside a permanent chain link fence there. By fall, the array could produce about 50 percent of the college’s electricity.

The Village has been in discussions with Antioch for two years about a large solar array on campus, according to Stratton, Antioch facility’s manager, since the college’s solar array would be connected to the Village grid and because Antioch is currently the village’s largest consumer of electricity.

An onsite solar array is essential to reaching the zero carbon footprint goal set by the college and so the college can “walk the talk” about the threat of climate change, Stratton said.

“We’re not going to depend on the large utility companies to do what’s right because they will extract and burn fossil fuels as long as possible,” Stratton said. “Research shows onsite renewable generation is the way going forward.”

The need to produce solar power on campus was heightened when Antioch moved recently from natural gas heating to a geothermal heating and cooling system, which increased its electricity load dramatically, Stratton said. Even though the village is projected to purchase about 85 percent of its electricity from renewable sources by next year, Antioch wants to go further, since the electric grid still carries electricity generated from fossil fuels.

“The Village is supporting the renewable industry, but what we’re getting across our grid is still coal and natural gas-based,” Stratton said. “This way we know we’re getting clean energy directly to our campus.”

Neighbors, however, see a potential community eyesore in the solar array. They have also expressed concern about Antioch cutting trees down to accommodate the panels and the impact on Village finances of losing such a significant electricity customer.

“We love solar energy, we just don’t think planting five acres of industrial-looking ugly concrete, steel and glass panels instead of open space is a good idea,” Kelly said of the coalition. “I don’t want my bill to go up so I can have solar panels out my window.”

Stratton responded that because of neighbor concerns, Antioch moved the planned solar array slightly west to save a stand of old sycamore trees growing along Corry Street, and that they plan on erecting a gallery of student and community art projects along the fence to make it look more attractive. Furthermore, the village won’t be harmed financially because of flexibility in the town’s electricity portfolio and because Antioch will continue to pay peak demand charges on its electricity use.

Kelly and other members of the Yellow Springs Open Space Coalition look forward to attending the May 7 meeting to ask more questions of Antioch leaders, but they remain skeptical that the college will respond to their concerns. Instead, the group plans on pressuring the Planning Commission to not grant Antioch conditional use permits for the solar farm and later, for large animals.

“Our initial position was we wanted the golf course to stay the same and then we thought they would listen,” Kelly said. “At this point we realize our only position is to speak out at the Planning Commission.”