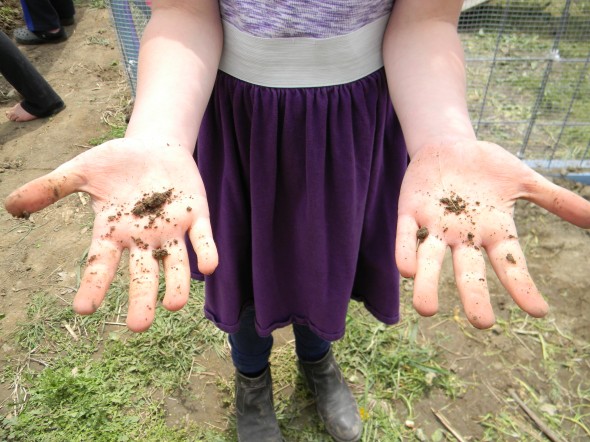 Dirt don't hurt: Antioch School students get into the spring of things in the garden. The school was able to expand its garden, thanks to student fundraising and grants from the Whole Kids Foundation and Whole Foods of Mason. (Photo by Lauren Shows)

The Antioch School will get a little greener this year, thanks to efforts from its students and from recent grants that the school has received in order to expand its garden. Though the Antioch School has had a garden for quite a few years, the new bequests will take the students’ experience to a new level.

Plans for garden expansion began last year, when the school’s Miller Fellow, Hana Katz-Stein, led the Older Group students in planning and executing a fundraiser. The students organized an auction, which was held at the school’s annual pancake breakfast, and the funds from both allowed the school to purchase deer fencing. The fencing enabled the students to secure a larger area for their garden.

The garden’s expansion kicked into high gear, however, after the Antioch School’s coordinator, Liz Griffin, ran across a school garden grant being offered by the Whole Kids Foundation, a non-profit organization whose goal is to foster the health and nutrition of children. Griffin encouraged kindergarten teacher Lindie Keaton to apply, and though she did, her past experience working with non-profits left her in doubt that the Antioch School would be on the foundation’s radar. “[Whole Kids Foundation] is a national group, and even though they give a lot [of money], I didn’t really think that we would get it; we’re a small place. So I was surprised and thrilled.” The Antioch School was one of 2,100 schools to receive a grant, along with seeds from High Mowing Organics and information on how best to succeed in maintaining the garden.

With the funds the school received, they’ll be able to plant four new raised beds and install a hand pump that recycles rainwater, to be used both for watering the garden and in water play, something Keaton says the teachers have wanted for a long time. The funds also helped pay for a new chicken run and coop for the school’s three chickens, which the kindergarten class raised themselves from eggs. The run and coop occupy a large space in the garden, and are floorless and mobile, so that they might be moved to different spots around the garden in successive years. This practice will benefit the chickens, who will be able to explore and eat from different places in the garden, and the soil beneath them, which will be naturally enriched by the chickens’ droppings.

The school also received a grant from Whole Foods of Mason, which threw the students a garden party in April and provided stepping stones for the garden. The stepping stones will help the students to navigate the garden without fear of treading on someone’s seedlings. All of these improvements, says Keaton, will allow students to come and go in the garden more independently. Outside of tending the plants or visiting the chickens, she says, the garden will be “a place to go and sketch or write in your journal, or just have a little down time.”

The garden is slated to produce a variety of plants, including raspberries, strawberries, garlic, lettuce, spinach and radishes. The kindergarten class will also plant a “sunflower house,” which is comprised of densely-planted sunflowers that create a natural enclosed space where the students can play. Some of the food the kindergarten class plants, says Keaton, will feed their guinea pig.

But the kids, says art and science teacher Brian Brogan, will also get the chance to taste the fruits of their labor. “We do a lot of cooking activities with the students,” he says, “and we try to emphasize eating natural, organic foods. We don’t control what kids bring from home, but when we cook, we try to cook very healthy.” With a grin, he adds: “We do bake cakes once in a while, though.”

For a peek at the garden, take a look at the brief video below.